In Warangal, Telangana, Guram Muttaya holds up the A4 size plain paper, tattered edges already eating into the hand written note and the scrawled signature – the 60-year-old’s only ownership proof over one-fifth of a hectare of land that  he bought 27 years back paying 4500 rupees, whose present market price meantime has climbed to 200,000 rupees.

In Muttaya’s Kannayapally village as all over India’s southern Telangana State, informal  farmland sale transactions done through  a handwritten plain piece of paper locally know as sada bainama has been a customary practice mainly due to poverty and inability to pay the high land registration fee, illiteracy and legal ignorance. Even today, farmers occupy and cultivate land since 30 to 40 years on the strength of such informal sale documents. 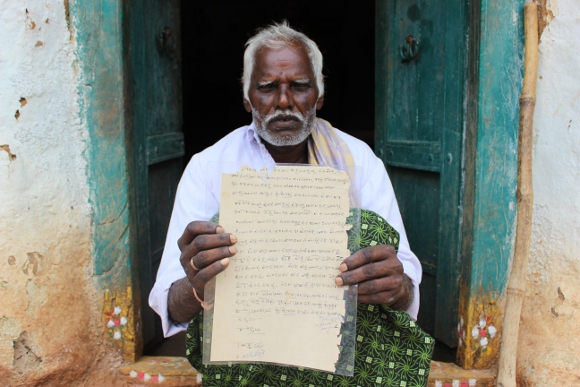 Guram Muttaya with his plain paper land purchase document transacted 27 years ago with the landlord of that region. Pic: Manipadma Jena

When Telangana’s Chief Minister Kalvakuntla Chandrashekar Rao offered a statewide three-week window from June 2nd – 22nd for free registration of rural farm land of up to 2 hectares in size that remained transacted on plain paper, e-portals clogged and crashed as over a million applications were filed.

A majority (70-85 percent) of farmers possessing informally transacted lands are poor farmers whose only source of livelihood comes from these lands’, according to the important government-commissioned Koneru Ranga Rao land committee report 2006.

Without registration in government land records and a legal title document, these poor farmers have remained unrecognized as legal owners and thus deprived of institutional benefits.

“Registering the land will fetch me government agriculture loans, compensation for crop damages and crop insurance too. Unlike earlier, local money-lender too no longer accept these for mortgage,” Muttaya said.

In semi-arid Telangana, of its 26 million rural population, over one-third depend on agriculture for their livelihood, 86 percent are small and marginal holdings (2 hectares and less) and 63 percent have rain-fed land. High labour cost, low mechanization, erratic rain or floods often leave them in dire need of supportive financing that Muttaya mentions.

Even the 10 percent of the land cost needed for registration, many are unable to raise at the needed time or save.

Moreover, with the real estate prices sky rocketing the farmlands have become valuable. The sellers’ heirs, being more educated and aware know that sada bainama will not hold upto law hence they are demanding present-day value of land. This has stalled registration in legal disputes.

Close to a million land-related complaints have been filed in state-wide revenue offices in the last two years, according to a 2014 Telangana Land Caravan survey by Landesa, a Seattle-based non-profit that works globally to secure land rights for the poorest.

Digitalizing plain paper transactions and land records, to clean up and update

“To ensure transparent land records for disadvantaged and tribal farmers in future and eliminate graft that illiterate farmers may be victim of, we introduced an online applications process at dedicated customer service centres,” E. Venkatachary, revenue divisional officer of Nalgonda district said.

In a bid to clean-up and update its land records, for the first time the revenue department is using biometric authentication. The electronic applications are seeded with Aadhar’s unique identification number (IUD), received at e-seva customer service centres and individual details stored online in Telangana Land Records Management System, easily available to these farmers in future saving them time-consuming visits to the revenue office. 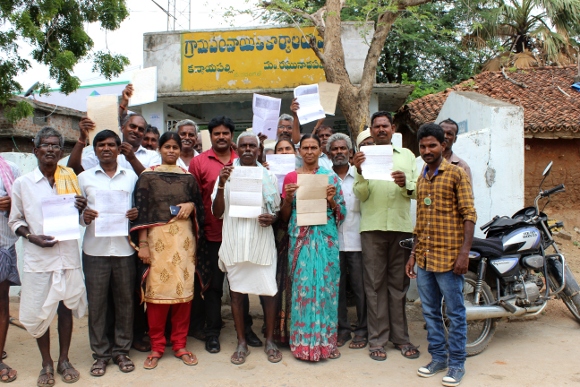 Aadhaar data inclusion is mandatory for tehsildars as well, when they log in to access and scrutinize the applications, send enquiry notices to applicants, upload reports and finally generate the land ownership certificate. Every land record change will henceforth be made through its specific website Mabhoomi (meaning Motherland) say government officials.

“The last land survey in Telangana was done 70 years ago while village records that should be updated  yearly, lag 4 to 10 years behind. Updation of land records is a challenge,” said Meka Sunil Kumar, State director of Telangana State and Andhra Pradesh of Landesa.

At present, a farmer may have his farmland title, but its exact location remains unidentifiable in official maps. Digitalizing the informal land transactions seeks to prevent tampering by vested interests, Kumar added.

According to Venkatachary sada bainama transactions constitute 5 to 10 percent of agricultural land in most villages. The exemption of all registration expenses has been a strong factor in pulling in large number of applications along with better awareness of its process and benefits, most applicants said.

Even though the government had previously offered windows for registration of informal land sales, the last in 2009 garnered only 70,000 applications.

This time round, creating awareness among the target group and revenue officials was high on the agenda.

“Landesa trained around 800 field and supervisory officials in four districts, apprising them of land laws that we simplified, and steps they should follow during field enquiry of claims,” Kumar said. Print and electronic media pitched in to spread the message.

“We first came to know about the government’s scheme from the government’s ‘tom-tom’ (announcement accompanied by drum beat through village streets) and understood better from Landesa’s wall posters,” said 65-year-old Verlep Malliah in 425-households Akkarajupally village that has put in as many as 245 applications, more than one per household.

Other benefits for the subsistence farmers

Although awareness and applications have been high, a large percentage may likely be found ineligible under the offered scheme or potentially head for legal disputes.  “Even if we assume out of the 1 million applicants, that 500,000 farmers with just one hectare land get their registration free, each saving Rs 1000, collectively the farmer community saves a huge 5 billion rupees,” said Sunil Kumar.

“Out of 76 types of land-related legal disputes, those resulting from plain paper transactions are among the fifth highest in Telangana, a drain on the poor farmers’ meager earnings. This would reduce now,” he added.

N.Usharani, Landesa’s community mobilizer in Kannayapally village said 30 percent of applications are likely to be rejected as they pertain to government land, ‘assigned’ over the years to the landless poor.  Its sale or purchase is legally prohibited but beneficiaries informally sell them in needy times or due to uncultivable land quality.

Thipparthy’s (a tehsil or mandal in Nalgonda district) tehsildar Chandra Vadana said atleast 20 percent of all applications might run into legal issues as the heirs of sellers are either contesting the transaction or demanding current market land price.
In order to save registration costs, family land partitions too have found their way in constituting 10 to 15 percent says Kannayapally Village Revenue Officer (VRO) Raju Lyaga, adding there are other issues like informal sale of one piece of land several times.

Despite the training revenue field official received, several villagers expressed apprehension of palm-greasing demands from them when the regularization process goes underway. Applicants unanimously, complained of e-sewa centres demanding up to 100 rupees to even accept applications instead of the fixed 35 rupees service charge.

Corruption in land registration, especially in the mutation of ancestral land is an aspect Chief Minister Rao expressed concern about when announcing this scheme.

This last problem gets worse among the 3.3 million tribal population in Telangana. “The revenue records have not been updated in the last 50 years, in most families, forefathers, now dead, remain owners of the land,” says Gadu Gadhaiah Kalthi, Landesa’s community mobilizer in tribal village Puttalabhupathi, himself of the dominant Koya tribe.

Half of the land in tribal areas is occupied by non-tribal people despite the protective Land Transfer Regulations (LTR) according to the 2014 survey. There are concerns that the sada bainama regularization scheme might further this trend by various back-door practices prevalent.

“While the 1881 census recorded 35 percent non-tribal in then undivided Telangana region’s scheduled areas and 50 percent in arterial road-side villages, by 2011 census they had outnumbered the tribal population. Today tribal people have been pushed out of their land. Nearly 60 percent live outside scheduled areas," V.N.V.K. Sastry, a retired director at the government’s Tribal Research Institute in Hyderabad said.

“The State itself through its legal amendments over the decades is seen to give priority to exploit natural resources in tribal areas. This is a political environment we live in and be it sada bainama or oral transaction, non-tribal in Telangana will always have the upper hand,” Sastry added.

Nationwide, on crimes committed against scheduled tribes, the category The Scheduled Castes and the Scheduled Tribes (Prevention of Atrocities) Act, 1989 that prohibits tribal land transfer to a non-tribal, has the highest number of crimes according to desegregated data 2012 (the latest available).

A similar situation is apparent in Odisha, Chhattisgarh and Madhya Pradesh that have largest communities, of India’s 104 million scheduled tribe population, living on valuable mineral resources.

Among Odisha’s scheduled tribes for example, in a span of just 5 years, between 2005-06 and 2010-11, the magnitude of land alienation was such that the number of marginal farmers increased by a huge 12 percent pushing up their numbers to 66 percent of total tribal land-holders. Over the same period, overall tribal-held cultivated area shrunk by nearly 8 percent, according to Tribal Affairs ministry data.

Though this may be attempted to be explained away by citing mining companies’ advent and land acquisition during this phase, illegal land alienation cannot be ruled out.

Manipadma Jena is a senior development and environmental journalist.