An entitlement with no law

With the Central government lobbing the ball into the states' court, the right to education bill has practically lost its very essence. Without a central legislation to support it, a constitutional guarantee will have little meaning, say most experts. Deepa A concludes the 'Lens on Education' series.
06 January 2007 -

The right to education bill, making education free and compulsory for children in the 6-14 age group, had several flaws, not the least the fact that it absolved the government of its many responsibilities towards making education equitable. Almost as if to prove that activists were indeed right in questioning the government's commitment to education, the Central Government has washed its hands off the bill, instead sending a Model Right to Education Bill to the states in July 2006, asking state governments to draft their own laws.

For educationists and activists, the move is yet another indicator of the extent to which successive governments have neglected education and brazenly gone back on their promises, even if these were etched on to their Common Minimum Programmes (CMPs). The current United Progressive Alliance (UPA) government at the Centre, for instance, had assured in its CMP that it would increase the public spending on education, a claim that withers in the face of its inability to even pass a legislation enabling the right to education, guaranteed by the Constitution. 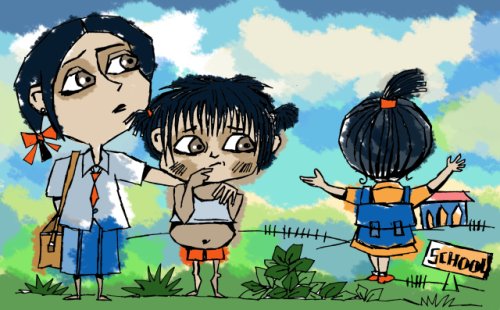 "As education is a fundamental right, there is a need for a Central legislation to make it a reality at the ground level," says Ambarish Rai, convener of the People's Campaign for Common School System, which has organised protests demanding that the Centre prepare and pass a pro-people bill instead of neglecting a Constitutional right. But, just as the Centre has not bothered to spend six percent of the GDP on education  a figure stated as desirable as early as two decades ago in the National Policy on Education-1986  it has ignored one of its main duties: guaranteeing children their right to education.

Magsaysay award winner Shanta Sinha of the Andhra Pradesh-based MV Foundation calls this "unacceptable". "The issue of rights is something that has to be protected across the country as a whole. There can be disparities in education levels if it's left to the states," she says.

By sending the bill to the states, the Centre has essentially left it to the state governments to come up with their own plans for drafting the legislation. The only rider attached is that the funding that the states receive from the Centre under the Sarva Shiksha Abhiyan (SSA), a scheme meant to ensure universalisation of elementary education, will depend on the extent to which they implement the model bill  those who do so will continue to receive 75 percent of funding under SSA, while others will get only 50 percent. However, this policy of "privileges and relaxation of rules" is anything but ideal, says Rai.

"The issue of rights is something that has to be protected across the country as a whole. There can be disparities in education levels if it's left to the states."
-- Shanta Sinha

Besides, the model bill makes no mention of certain clauses that were an integral part of the draft Right to Education bill, such as asking private schools to reserve 25 percent of the seats for the poor, and norms related to pupil-teacher ratios, buildings and classrooms, Rai points out. Indeed, most criticism of the government move centres around its unwillingness to take on private schools, which were balking at the idea of admitting students from economically weaker sections. If implemented, this provision would have paved the way for creating a common school system, under which all children in the neighbourhood would go to the same school irrespective of caste and class. This system was recommended as an ideal measure to mitigate class divisions by the Kothari Commission in the mid-sixties.

"Today, two-thirds of the children who are out of school are from SC/ST [Scheduled Caste/ Scheduled Tribe]," says Rai. While the Centre has stressed on the need for reservation in higher education, it has not tried to create a conducive atmosphere that will enable those from the so-called backward castes to go in for higher education in the first place.

Says Rai, "This shows a complete lack of political will  it is true that education is in the concurrent list but the Centre has to do more than the states. The recent CAG [Comptroller and Auditor General] report on SSA has said that many states misused SSA funds, and that in itself underlines the need for a common policy for regulation and monitoring." Instead of working towards this, the model bill has done away with a clause that recommended the setting up of the National Commission for Elementary Education to monitor whether the right to education was becoming a reality for children in the 6-14 group.

In the matter of school management committees, the model is a mixed bag in itself. One the one hand, it empowers the Committees to monitor the functioning of teachers, which is seen as positive. This, according to Rai, has led to fears among teachers' unions that the comments of the committee members on the teachers' performance could affect their (teachers) increments or promotions. On the other hand, the bill puts the onus of enrolling children on parents and provides for school management committees to direct defaulting parents to perform community service. As educationists had pointed out earlier, many of such parents would be daily wage earners from the poor community and punishing them for what is essentially a state failure would serve no purpose other than to deprive them of their income for the days they are asked to do community service.

Activists see the Centre's failure to enact the right to education legislation as many in a series of calculated moves meant to distance itself from primary and secondary education. Educationist Anil Sadgopal, who was in the government-appointed committee that prepared a report on the universalisation of secondary education, had pointed out that while the report on secondary education was accepted, several of the norms recommended by the committee were later diluted. Furqan Qamar, who was also a member of the committee, says that when the report reached the Planning Commission, the recommendation that all secondary schools should be like Kendriya Vidyalayas was not accepted, possibly because of the financial implications necessitated by such a requirement. Secondly, the Commission also mooted the idea of setting up a distance education board in secondary education as it was considered a "cheaper alternative". Says Qamar, "There cannot be distance education at the school level, it cannot be an alternative to formal education." However, to cut costs, this was an easy option that the Commission was willing to consider.

V K Tewari, general secretary of the All India Federation of University and College Teachers' Organisations and faculty member at DAV College, Jalandhar, says that while the UPA government harped on making higher education accessible, it had done little to reduce the fees charged for various courses, especially in private institutions. "The fee structure is not regulated while even a committee on the financing of higher and technical education, headed by Planning Commission member Bhalchandra Mungekar, recommended in 2005 that there should be less privatisation. The committee's report has been accepted but it has not been implemented." In fact, the government had accepted a plethora of reports but not implemented any of them, just as it has done in the case of the right to education bill, he adds.

Educationists say that several states have not reacted favourably to the Central directive to formulate legislation to enable the right to education. "I have information from Bihar that the government feels that it is not the responsibility of the state alone to implement this. Karnataka and West Bengal governments have also gone against the bill, claiming that they don't have the money to implement it, and that it's also the responsibility of the Centre, not that of the state alone," says Rai.

In Kerala, where much of what is required under the bill is already a reality, activists and educationists have voiced their concern about the Central government move, says Madhusudhanan C, a state executive member of the Kerala Sashtra Sahitya Parishad, an organisation that has worked actively in the state's literacy movement. "In Kerala, we already look at guaranteeing education for children up to 17 years, not 14," he points out. Yet, if the state's people are rejecting the idea, it is to express their displeasure at the fact that the Central government is abdicating its responsibilities, he adds.

"One could have looked at the Central move as a positive thing  that this is a kind of joint venture in which both the states and the Centre have to play a role, instead of it being a Central government initiative alone. But, this is not about the Centre sharing its responsibilities, it is about the Centre stepping away from primary education," Madhusudhanan explains. The Central government also seems to have been swayed by the private school lobby and hence paid heed to their concerns at the cost of that of the people, he adds.

All of this, ultimately, means that the right to education bill has practically lost its very essence. Kailash Satyarthi, chairperson of a non-government organisation working with children called Bachpan Bachao Andolan, says that unless there is a Central legislation to support it, a constitutional guarantee will have little meaning. "If one goes to court about a right to education case, the court won't have a single law to decide the matter," he explains. Besides, a country cannot sustain economic growth unless children are educated, something that a government led by an economist like Manmohan Singh should understand, he adds.

If it's lack of funds that the government cites as an excuse for not implementing the bill, then it is not a valid enough reason, says Rai. "On the one hand, there is relaxation of rules for corporate houses, and we seem to have enough money for organising the Commonwealth Games," he says. But when it comes to children's rights and indeed, their future, coffers suddenly turn empty, clear indicators as it were of the skewed priorities of the Central government.

Deepa A is a New Delhi-based journalist. This article is the concluding piece in India Together's multi-part series, "Lens on Education", and is funded through support from the Indian American Education Foundation, a not-for-profit organisation dedicated to supporting the education of children with disabilities in India. IAEF additionally works to educate mainstream America about the Indian American community and its heritage.