Romila Thapar on the importance of speaking out

A one-on-one with India’s most well-known historian, Romila Thapar, who shares her thoughts on intellectuals protesting the growing communal discord, the ever-shrinking “liberal space” and the need for a dialogue that defines pluralism in the Indian context with Rashme Sehgal.
24 November 2015 -

Over the years, Professor Romila Thapar has been feted and criticised in equal measure. As one of India’s most distinguished historians whose works significantly portray the origins of Hinduism as an evolving interplay between social forces she has courted controversy on several occasions.

In fact, in the recent backdrop of the “rising intolerance” in India she has fearlessly questioned the actions of the opinion-makers in her latest book, an anthology of essays titled, The Public Intellectual in India, and urged public intellectuals, “people who can ask the right questions at relevant moments”, to step up and speak up.

The centrepiece is the long essay by Thapar called: ‘To question or not to question? That is the question’. 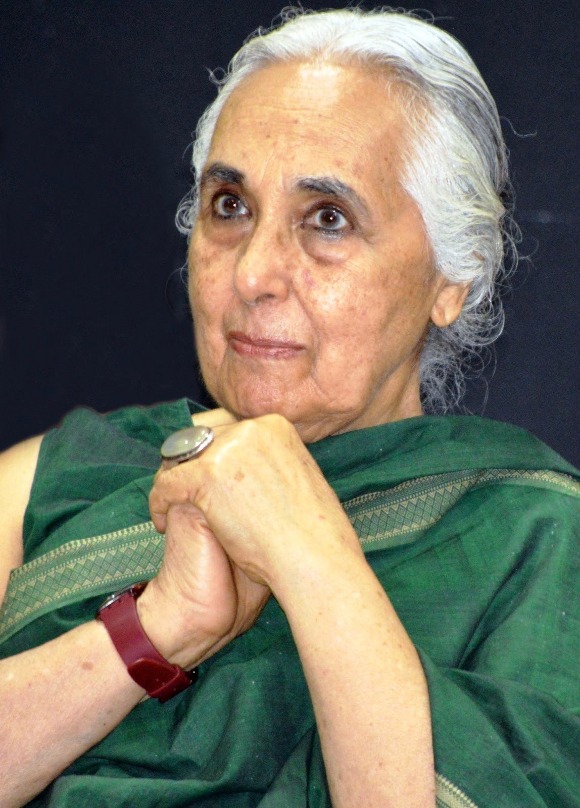 Romila Thapar, one of India’s most distinguished historians whose works have portrayed the origins of Hinduism as an evolving interplay between social forces, has courted controversy on several occasions.Pic: WFS

In this candid one-on-one the octogenarian shares her thoughts on intellectuals returning national awards to register their protest on communal discord, the “ever-shrinking liberal space” in the country and the growing need for a dialogue that defines pluralism in the Indian context.

Q. Your recently published book, The Public Intellectual in India, talks about the role of the public intellectual in providing an alternative perspective to the present situation.
A. I had given a lecture a year ago on which this book has been based. At that time, there was considerable silence; there was no public discussion on what was happening. Strangely, the week the book was released [October 2015], spontaneous reactions and protests began. I have had to eat my words. People are not silent, people have spoken out and I am very pleased with that.

Q. What do you feel about the over 400 writers, filmmakers, scientists and intellectuals returning their state awards in protest of the rising communal disharmony?
A. It was extremely important that this step be taken, that all of us, who have joined in the protests, must take every opportunity to explain the [reasons behind this] protest and why we are doing this.

Q. Do you think these protests will push the government to change its policy?
A. If one were to go by the initial reaction, it may not change its policies. But it does seem to be paying attention. Among those of us who are protesting [in different ways] are people who are not vaguely radical – like scientist C.N.R. Rao, Reserve Bank Governor Raghuram Rajan, Infosys founder Narayana Murthy, actor Shahrukh Khan. [But] I presume that there will be some kind of reaction from the government.

Q. Do you see the reaction in terms of the beginning of a dialogue?
A. It could be. The easier dialogue would be to demand that institutions be made autonomous. The more difficult dialogue would be to insist on the reining in of organisations that are creating this violence, terror and fear. It would need a very strong government to take such action.

Q. But in the case of the three rationalists who have been assassinated [Govind Pansare and M.M. Kalburgi in 2015,  and Narendra Dabholkar in 2013] the blame has been put at the doorstep of the respective state governments that have not yet arrested the culprits.
A. It’s a terrible situation. We have not seen any action especially since there has been a lot of suspicion. The contrast is huge; when other groups are picked up, interrogation is started right away.

I don’t think there can be any excuse for any central government to not take action when an incident like this takes place. Basically, it’s a question of trying to build confidence in society.

Q. We have had several leaders pointing fingers at the protests of intellectuals and writers. Why did these intellectuals not protest during the anti-Sikh riots of 1984?
A. The point is nobody has done their homework. If a group of people is protesting, it is for the media and the political parties to find out who these people are. The majority of these individuals have also protested earlier. I can give my own example. I protested strongly during the Emergency, at the time of the anti-Sikh riots, when Salman Rushdie’s book was banned, during the demolition of the Babri Masjid, Gujarat riots and the recent fatwa against A.R. Rahman. I have protested against the Bharatiya Janata Party (BJP), the Congress and the Communist Party of India (Marxist) over the Nandigram unrest.

Q. There have been some writers and intellectuals who have stated that returning an award is an insult to the nation because the award is given by the nation.
A. These same accusations were made against me when I turned down the Padma awards. The reason I gave at the time, too, was that these are not State awards. These are awards given in the name of a State by a government. When you read the list [of awardees], the major names are clearly those individuals who the political party in power is happy with.

Q. You have often emphasised the lack of liberal space in the country.
A. Till one year ago, I thought that there had been a considerable shrinking of liberal space. I would say that the recent events have shown there is a little space. I’m wondering whether action, small or big, will be taken against the people who have protested? We have to wait and see.

Q. Has India lost touch with its secular character?
A. During the 1960s and 1970s, the political parties had an ideology that supported secularism. Had the Congress party maintained its strong secular ideology and acted on it, the situation would have been different right now.

Another reason [why those propagating the non-secular ideology are thriving] is that there is a [sizeable] population of young people in India today who have grown up on the idea of the neo-liberal economics in which the economy would create a lot of jobs. There is a sharp sense of disappointment because the “Utopia” promised has not come about. So when you are in a situation of great competition, whether it is for jobs, water, healthcare, and so on, while resources remain very few, there is a tendency to turn to ideologies and groups that give you easy answers.

Q. Are you pessimistic about the future?
A. We are definitely at a turning point. Things can go one way or things can go in a completely different way. But at this point it is hard to tell which way they will go.
(© Women's Feature Service)
Rashme Sehgal
24 November 2015