Ruth Manorama is a women's rights activist well known for her contribution in mainstreaming Dalit issues. Herself from the Dalit community, she has helped throw the spotlight on the precarious situation of Dalit women in India. She calls them "Dalits among the Dalits." A peacewomen profile from the Women's Feature Service and Sangat.
24 February 2006 -

Ruth Manorama, 42, is widely known for her contribution in mainstreaming Dalit issues, especially the precarious situation of Dalit women in India. Ruth, herself from the Dalit community, calls the women "Dalits among the Dalits." Ruth has also contributed enormously to breaking the upper-class, upper-caste image of the women's movement in India. In 2005, she was one of 1000 nominees for the '1000 women for the Nobel Peace prize' campaign.

Born in Chennai (Tamil Nadu), Ruth grew up seeing her parents engaged in active social work, and developed an early inclination for the work herself. Her mother, Dorothy Dhanraj, was interested in women's education. Dorothy even resisted her conservative father to attend school and ultimately became a teacher. Always a rebel, she converted to Christianity in her teens. She was also deeply influenced by Pandita Rama Bai. This is how Ruth got her second name 'Manorama' - after Rama Bai's eldest daughter. 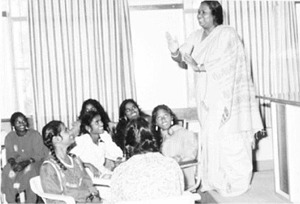 Ruth's father, Paul Dhanraj, a government servant in the postal department, had mobilised poor people in the villages near their locality to successfully struggle for rights to the land they were living on for generations. Both parents encouraged Ruth and her sisters to study, have careers and be self-reliant. They wanted their girls to be role models for the Dalit community to which they belong. Ruth's parents kept an open house. Their deep and practical faith in God, their hard work, principles of justice, dignity and service to the poor have deeply influenced Ruth's own life.

With such encouragement, Ruth and her siblings (four sisters, three brothers) all did well in studies. After obtaining a degree in science from the Women's Christian College, Chennai, Ruth opted for training in community organisation. While she was doing fieldwork, her father, who was eager for her to do a good post-graduate course, found out about an MA in social work being taught at the Stella Maris College in Chennai. Her father gave her money for admission to the course and asked her to join. Ruth, still unsure, dilly-dallied for a while. Then came a letter reminding her about submitting the course fees. She quickly hid it from her father, rushed to pay the fees and joined the course.

After she completed her Masters, Ruth joined an NGO in Chennai. Around this time, there were floods that completely submerged the huge slum - Dhideer Nagar, Saidapet - where she was working. Ruth and her colleagues were successful in getting the slum rebuilt, raising the levels and improving the facilities so as to avoid the annual floods that inundated the place.

Subsequently, Ruth started Women's Voice and registered the Bangalore Gruhakarmikara Sangha (domestic workers' union) as a trade union. In 1986, Ruth was asked to participate in a cross-cultural study comparing Afro-American Blacks in the US and Dalits in India. Her specific interest was to study the lives of Black women and compare it to the situation of Dalit women. She realised that although several core issues were different, there were many similarities in the situations of marginalised communities across the world.

At an early stage itself, Ruth realised that large, mass-based organisations were necessary to take up issues related to societal structures affecting large populations over a wide area. Thus was born the National Federation of Dalit Women.

Ruth was also closely associated with the mobilisation of Dalits towards the World Conference Against Racism in Durban, an effort that put the issue on the international map. In 1993, she organised the public hearing on Violence Against Dalit Women in Bangalore, and the National Federation of Dalit Women was born out of that effort. Ruth was also a core group member of the Asian Women's Human Rights Council.

Her work on coordinating the South India chapter of the preparations for the Fourth UN World Conference on Women in Beijing in 1995 had a big role to play in this. After returning to India from the UN Conference, the Advisory Group decided that ten regional members of the task force would come together as the National Alliance of Women (NAWO), with Ruth as president, to take the mobilisation of women forward.

"Whenever I feel discouraged or tired, one look at the dedication of the poor women to their families and society is enough to move me."

"Whenever I feel discouraged or tired, one look at the dedication of the poor women to their families and society is enough to move me. I have tremendous confidence in the capacity of the poor to transform not only their own lives but also to build a just, humane and democratic society," says Ruth.

Ruth is married to N P Samy, the trade unionist who has brought together all the independent unorganised sector trade unions under an apex body, the National Centre for Labour (NCL). The couple has two daughters, both in college. Samy is, in Ruth's words, "a comrade and colleague and gives lots of solidarity and support for the causes I believe in." Ruth is also associated with the NCL as one of the secretaries.

Today, Ruth worries about globalisation and its effects on the vast majority of poor women and workshops, the weaponisation of South Asia, the culture of war, intolerance and violence, the growth of a consumer culture and Parliament's denial of women's demand for representation on one-third seats. She says, "I look back upon my work with both a sense of satisfaction as well as a sense of how much more remains to be done. I have all along tried to make my life a struggle against violence of all kinds: caste, communal and violence against women. And I feel quality changes have indeed been brought about."

And what is it that inspires her? "The hard work and enthusiasm of the poor, especially the women I work with, challenge and inspire me to excel in my work."

This story comes through a project of the Women's Feature Service and SANGAT. Sangat is a South Asian initiative working on issues related to gender, peace, development, human rights and sustainable livelihoods.