No end to a shameful practice

Despite laws abolishing the inhuman practice of manual scavenging, over a million dalits in 'superpower India' are caught in a vortex of severe social and economic exploitation. Even the central government pleaded lack of resources in failing to implement the law effectively, writes Sunil Kuksal.
12 December 2006 -

The social, cultural and economic realities of modern India unfold a series of paradoxes. While a parliamentary law bans the manual scavenging and the government approves projects to wean the underprivileged section away from this dehumanising occupation, cruel caste apartheid and brutalising poverty perpetuate the practice. Furthermore, neo-liberal economic policies restrict alternative possibilities of having a dignified livelihood.

The term 'manual scavenging' describes the daily work of manually cleaning and removing human faeces from dry (non-flush) latrines across India. Workers, mostly women and young boys, are also referred to as 'night soil workers', a Victorian euphemism that hides the repugnance of the word 'shit'. In India, manual scavenging is a caste-based occupation carried out by dalits. The manual scavengers have different caste names in different parts of the country: bhangis in Gujarat, pakhis in Andhra Pradesh, and sikkaliars in Tamil Nadu. These communities are invariably placed at the bottom of caste hierarchy, as well as of dalit sub-caste hierarchy. Using a broom, a tin plate and a drum, they clear and carry human excreta from public and private latrines, more often on their heads, to dumping grounds and disposal sites. 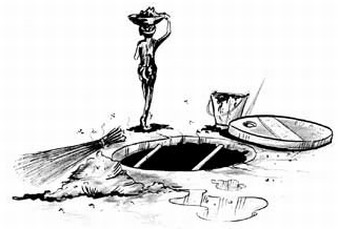 Though considered illegal, manual scavenging is forced onto dalits by caste pressure. Scavengers earn anywhere between Rs 20 to Rs 160 a month and are exposed to the most virulent forms of viral and bacterial infections that affect their skin, eyes, limbs, respiratory and gastrointestinal systems. Official figures show that there are still 3.43 lakh scavengers in the country. A 2002 report prepared by the International Dalit Solidarity Network, including Human Rights Watch (United States), Navsarjan, (Ahmedabad, Gujarat), and the National Campaign on Dalit Human Rights (NCDHR), gave estimates of one million dalit manual scavengers in India.

ActionAid India's random survey in 2002 of six states, Madhya Pradesh, Andhra Pradesh, Orissa, Uttar Pradesh, Rajasthan and Bihar, claimed that manual scavengers were found in at least 30,000 dry toilets. The scavengers belong to the valmiki community and its sub-sectsâbadhai, charmkar, barguda and bherva. The survey found that the scavengers face severe discrimination even from other dalits. Teashop owners in some villages still keep separate, often broken, utensils to serve valmikis.

The national commission for safai karamcharis, a statutory body, pointed in its reports to the use of dry latrines and continued employment of manual scavengers by various departments of the Union of India, particularly the railways, the department of defence and the ministry of industry. While states like Haryana deny employing manual scavengers, other states like Andhra Pradesh employ them through municipalities. The practice is on in almost all states, including Bihar, Maharashtra, Jammu & Kashmir and even Delhi. The Indian railways is one of the largest employers of manual scavengers.

Mahatma Gandhi raised the issue of the horrible working and social conditions of bhangis more than 100 years ago in 1901 at the Congress meeting in Bengal. Yet it took about 90 years for the country to enact a uniform law abolishing manual scavenging. The Employment of Manual Scavengers and Construction of Dry Latrines (Prohibition) Act, 1993 punishes the employment of scavengers or the construction of dry (non-flush) latrines with imprisonment for up to one year and/or a fine of Rs 2,000. Offenders are also liable to prosecution under the Scheduled Castes and Scheduled Tribes (Prevention of Atrocities) Act, 1989. This Act to eradicate a pernicious practice that only dalits were subjected to, aims at restoring the dignity of the individual as enshrined in the Preamble to the Constitution.

Given the high prevalence of the illegal practice, the government launched a national scheme in 1992 for identifying, training, and rehabilitating safai karamcharis and allotted substantial funds for this purpose. However, only a handful of scavengers benefited, and the scheme's failure is evident in that there remain more than one million manual scavengers in India.

The Act, first enforced in Andhra Pradesh, Goa, Karnataka, Maharashtra, Tripura, West Bengal and all the union territories, made it obligatory to convert dry latrines into water-seal latrines (pour-flush latrines). It was expected that the other states would adopt the Act by passing an appropriate resolution in the legislature under Article 252 of the Constitution.

A petition filed in the Supreme Court in 2003 pointed out that the practice persists in many states of the country, and particularly in public sectors like the Indian railways. The petitioners sought the enforcement of fundamental right of persons engaged in this practice guaranteed under Article 17 (right against untouchability) read with Articles 14, 19 and 21, that guarantee equality, freedom, and protection of life and personal liberty, respectively. They urged the Supreme Court to issue time-bound directions to the Union of India and the various states to take effective steps to eliminate the practice of manual scavenging, and to formulate and implement comprehensive plans for rehabilitation of all persons employed as manual scavengers.

As the hearing of a public interest petition filed by the safai karamchari andolan, six associated organisations and seven individual manual scavengers, in the Supreme Court has revealed, the number of manual scavengers has increased from 5.88 lakhs in 1992 to 7.87 lakhs. Unofficial surveys estimate that over 12 lakh manual scavengers, of whom 95 percent are dalits, are thrust with the task of this 'traditional occupation'. They are considered untouchables by the higher castes and are caught in a vortex of severe social and economic exploitation.

During the recent hearing of the case the Supreme Court issued an interim order directing every department/ministry of central and state governments to file an affidavit within six months through a senior officer who would take personal responsibility for verifying the facts. If the affidavit proclaims manual scavenging in a particular department, or public sector undertaking or corporation, then it should indicate a time-bound programme with targets for liberating and rehabilitating all manual scavengers. The court warned the governments against making false statements in these affidavits. The interim order was an expression of the court's impatience with dilatory and insensitive responses from various states and the Centre to the petition.

The railways, in its affidavit, admitted that there are approximately 30,000 passenger coaches fitted with open-discharge toilets. The affidavit stated: "A proposal to fit totally sealed toilet systems is also under consideration and various technologies, e.g. biological/vacuum/filtration, etc, shall be tried out. However, no firm dates/time frame can be given for introduction of such system at this stage." The railways claimed that without facilities to make platform tracks concrete and provide washable aprons at all important stations, on track manual scavenging cannot be eradicated. The railways is perhaps the biggest violator of the Act; yet none of the railway ministers has thought it necessary to allocate railway budget funds to implement the Act.

According to the national commission for safai karamcharis, progress "has not been altogether satisfactory" and benefited only "a handful of these workers and their dependents. One of the reasons for unsatisfactory progress of the scheme appears to be inadequate attention paid to it by the state governments and concerned agencies." State governments often deny the claim and cite lack of water supply as preventing the construction of flush latrines. This despite the sum of Rs 4,640 lakh (US$116 million) allocated to the scheme under the government's eighth five-year plan. Activists claim that the resources, including government funds, for construction and rehabilitation exist; what is lacking is political will. Members of the national commission for safai karamcharis consider it imperative that the commission be "vested with similar powers and facilities as are available to the national commission for Scheduled Castes and Scheduled Tribes." Currently, the commission has only advisory powers and it has no authority to summon or monitor cases.

The political class has failed to exert any will in acknowledging the gravity of the situation and its own duty to eradicate it. Even the central government pleaded lack of resources in failing to implement the law effectively. The judiciary, however, has taken exception to the fact that money was squandered, but yet at the ground level there are no results.

This article is republished with permission under our Space Share