Creative use of technology will help our governing institutions improve their infrastructure. That in turn may bring both transparency and inclusive, efficient markets says Krishna Rupanagunta.
01 January 2004 -

Walk down any street in a third world town or city and you see market forces in action. There is frantic marketing, negotiating, selling and buying going on. The streets are choked with vendors each epitomizing entrepreneurship, selling a bewildering array of goods. And you begin to wonder, why do economists lament the lack of the entrepreneurial spirit in the third world?

A vast and ever growing body of development economists, policy makers and even casual observers has attempted to solve this puzzle. The World Bank's World Development Report 2002 (WDR-2002) is devoted to addressing one such solution to this problem. The central question, according to this report, is what makes market activity possible and rewarding for some, but not for others? Why are some markets inclusive and integrated, while others are localized and segmented? According to the report, markets allow people to use their skills and resources and to engage in higher-productivity activities if there are institutions to support these markets. Rules, enforcement mechanisms, and organizations supporting market transactions are these institutions.

In developing countries, for reasons that are largely historical (ranging from an inherited legacy of colonial governance to inadequately developed market structures), governments have had to bear the burden of creating and enforcing these rules and organizations. This has by and large, been the pattern throughout the third world, and it has obviously met with very little success. Throughout the developing world, governance has largely become the preserve of the educated elite, which has largely operated with the principle of exclusion, usually by building a complex web of laws, which are beyond the comprehension of the rest of the population. 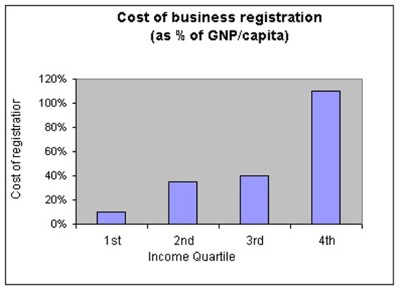 In addition, the bureaucratic structure of the government has made it difficult to enforce and ironically, put the highest burden (time, cost and effectiveness) on people who can least afford them. As is obvious to anyone who has attempted to deal with the government (and most people in the third world have had to go through this sometime or the other), it is a daunting exercise. It is usually simpler to grease a few palms and get the job done, and hence the corruption (refer to Chart 2). All this over the years has given rise to, as The Economist has labeled, institutionalized friction.

The charts show a comparative perspective of government regulations and perhaps not surprisingly, the complexity and cost are higher for developing countries. Chart 1 shows how the cost of registering a business is highest for the countries in the 4th (lowest) income quartile. This cost is measured in terms of a % of the GNP/capita. Chart 2 shows that the poorer countries have more complex regulatory framework and also that higher number of procedures come with higher corruption. 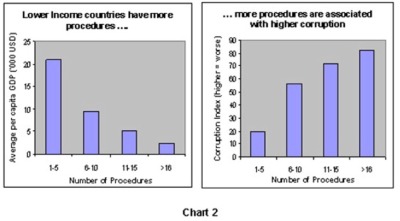 Clearly, one critical dimension of development is the implementation of less costly and less complex institutional norms. It is imperative that this aspect of governance needs focus both in terms of the demystification of the regulatory processes as well as improving speed, efficiency, consistency and reliability of these processes. The core issue here is the simplification of processes to make them more user-friendly, especially where there is significant citizens interface involved.

As countries, especially the third world, are integrating into the global marketplace, there is an even greater need for accountability of governments to their citizens a phenomenon that seems is assumed to much greater degree in the western world but has eluded much of the third world. Good governance is increasingly being acknowledged as not only a public good and a citizens right (making it an end in itself), but also a necessary factor for economic development.

In every aspect of governance, the existing flow of processes and documents may be examined and non-value added steps or operations eliminated.  •  Systems for better governance

Simplification implies good old-fashioned re-engineering of existing processes. This involves examining the existing flow of processes and documents in the regulatory framework and trying to eliminate the non-value added steps or operations in every aspect of governance. This can then be followed up by computerization from electronic storage and retrieval of data (e.g. government records); automating of processes (e.g. land registration) to enabling value-added services (e.g. making property ownership documents available for use as collateral for loans for small businesses).

It might sound a little presumptuous to talk of investments in Information and Communication Technologies (ICT) in a society which is still unable to provide basic public services to the population, there is growing awareness that ICT can and should be leveraged to address these very basic issues. There is growing evidence of the tremendous potential for leveraging ICT to improve efficiency of operations of the governments, make them more reliable and citizen-friendly.

Here is an example of one such success story in India. This will be followed by some suggestions of some value added services that could be built upon this foundation.

Andhra Pradesh (AP) is one of the largest states in India. Starting with the mid-90s, the state government realized the importance of IT in the development process. Over the last few years, several IT initiatives have been launched to make the government functioning more efficient not an easy task in a country legendary for red tape. Among the initiatives that have been launched, one of the most basic and possibly the easiest process has been the computerization of records. The state government launched a scheme called CARD (Computer Aided Registration Department) for computerized registration of land deeds. This project was started in 1996 and was successfully implemented across the state by 1998. Some of the highlights of this project are:

This has been a major accomplishment and given that the land registration process has a heavy citizen interface, the people of the state have felt the benefits of such a system. This in turn, could prove to be a catalyst for people to demand such services in other dealings with the government. Perhaps most importantly, this could be the foundation for building value-added applications.

What will it take to replicate this success?

Needless to say, any attempts at implementing such applications have to rely heavily on a communications infrastructure. The AP Government setup a state-wide network (called APSWAN) which has connected all the district headquarters across the state. In the subsequent phases, the network is to be extended to towns and villages (using a combination of optic fiber networks, dial-up connections and wireless). This obviously calls for substantial investment, and could be a stumbling block for cash strapped governments.

However, once the physical infrastructure has been put in place, it would be possible to attract private capital in these areas, by a combination of tax breaks, equity participation from the governments and/or development agencies. For instance, IFC (a World Bank subsidiary) has a GICT (Global Information and Communications Technologies) division, which provides funding for such projects (In 2000, IFC-GICT evaluated projects worth $62 million in India). UNDP (United Nations Development Program) has also identified ICT (Information and Communications Technologies) as one of the key thrust areas in its mission 'to cut poverty by half by 2015'. In addition, there are several private, not-for-profit entities (e.g. Markle Foundation Fund), which provide funding for such projects.

To begin with, government participation is probably necessary. The CARD project implemented by the AP Government, was fully funded by the government and cost the exchequer approximately $4.3 million. In the above case study, it might be useful to remember that a streamlined process of land registration is bound to improve registration, which in turn would generate additional revenue by expanding the tax base. Indeed, the AP Government saw an increase in net land registration revenues of 19.75% in the first year of CARD operations, up from 9.76% prior to the implementation of the CARD system. In addition, it is a documented fact that people are usually willing to pay for services, especially if they are efficient and 'user-friendly'.

In the CARD example, the AP Government registers approximately 1.2 million documents per year. A nominal charge of $1 per document for on-line documentation (in reality, the ability of people registering property documents would be higher) would net the government close to $1 million (assuming 80% of these documents are filed on-line). Finally, the $4.3 million spent on the CARD project has a large capital component (computer hardware, office LANs, office space and furniture), a charge which could be spread across other projects requiring substantial citizen interfaces. Indeed, there could be numerous applications meeting that condition ranging from filing of tax returns to voter registration.

The ASP (Application Service Provider) model holds tremendous potential in this area. The centralized ASP model is extremely well suited for a system that needs to be accessed from geographically dispersed locations, often with little or no technical expertise in the locations. Thus, such applications can be hosted and managed from a centralized location (say, the state capital) with the remote offices (district headquarters, towns and villages) accessing the application via the internet. This has the added benefit of ease of maintenance and management of application upgrades. In addition, such a model could provide, at a central location, a wealth of data, which can be used by the governments for managing and tracking development programs. For instance, a centralized land registration system could provide the foundation to build applications to track the usage of land (say, the ratio of croplands and grasslands by district) and subsequently, land output and productivity.

Finally, it is important to realize that the technical expertise built from such projects can be effectively leveraged in other regions by re-using the technologies as well as implementation experiences. Thus, the CARD system, with minimal changes, could be implemented across India (made easier by the fact that land registration is a federal subject and is governed across much of the country by the Indian Stamp Act of 1899 and the National Registration Act of 1908). In addition, technical expertise and implementation experience built from such projects can be transferred to other such projects in other developing countries as well.

It is creative applications like these that provide the basis for developing the infrastructure of our governing institutions that could in turn, improve transparency and provide the basis for more inclusive and efficient markets. It would be presumptuous to assume that merely implementing an IT system (after all, the costs would not be insignificant) would result in the expected 'development returns'. Indeed, one of the key findings from the CARD project was that 'change management' was the most important contributor, with the IT system playing the role of an 'enabler' in streamlining these changes. Given that any attempts at improving the institutional framework are dependent on a combination of legislative changes, overcoming resistance to changes on the grounds of fears of employee retrenchment and a change in the outlook of government officials, such projects stand a greater chance of success when led by public administrators with an understanding of technology, rather than technical specialists or business entrepreneurs with little understanding of public policy.