Where is teaching headed in the Modi regime?

Despite the simplistic articulation of teachers' roles and teaching, including that by PM Modi, and the alignment of education to a broader nationalistic agenda, could there be potential ‘teachable moments’ under the new regime? Shivali Tukdeo and Savitha Suresh Babu explain.
18 March 2015 -

Be it the long standing agitation by para-teachers demanding a change in the ‘permanent-contractual’ nature of their work, or a series of protests by Anganwadi workers drawing attention to their working conditions, teaching and teachers’ work have, for long, been a part of a range of struggles.

As a school teacher, one has to be resigned to having extremely regimented work days. In addition to teaching, mentoring and grading examinations, teachers’ work also includes several non-teaching components such as early care work, arranging school trips, and in some cases, helping the state in its elections, census and vaccination programmes.

For decades together, teachers’ work in India evoked a ‘symbolic respect syndrome’ – on the surface there has hardly been any disagreement about the importance of teaching; yet, we have not been able to create conditions that would enable our teachers to thrive. Not only does the pay leave a lot to be desired, there are a number of systemic inadequacies that pose serious challenges to teaching.

An absence of autonomy, restrictions on short-term mobility between teaching and allied professions, and privileging order over creativity are some of the factors that have locked teaching into being an immobilised, passive profession. Enormous expansion of schooling and greater segregation therein has also affected teachers’ work in recent years.

As diverse as the schools range – government, aided, unaided, and international among others, so do the teacher profiles and experiences. In the context of this rather difficult state of affairs, therefore, the focus on teaching by the Modi regime calls for attention.

The role of teachers

By way of an overall context, it is important to note the place of formal and informal education in the agenda and expansion of the Hindu right wing.

Vidya Bharati, along with its several connecting schools such as Shishu Mandirs, Vidya Mandirs, Saraswati Mandirs, Ekal Vidyalayas and Sanskar Kendras, dot the map of schools that prioritise education with a strong cultural and patriotic fervour. It is also useful to remember Vidya Bharati’s call to “Indianise, nationalise and spiritualise” education during the times of the previous National Democratic Alliance (NDA) government. 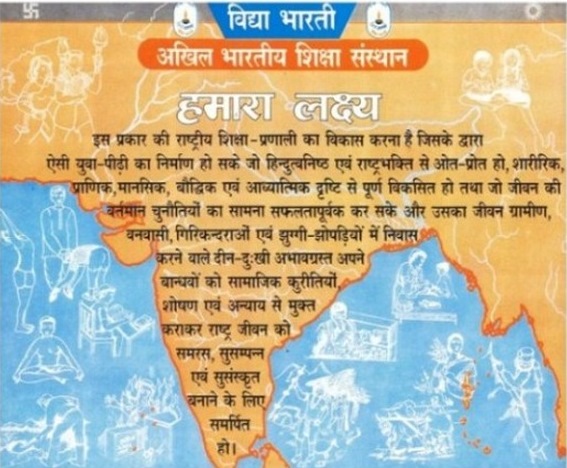 In such an imagination of education with Hindu nationalist overtones, teachers occupy a central place, as a wide range of reports indicate. It is the teacher who is expected to instil discipline, obedience, motivation, physical and mental strength, and a distinctive worldview. The project of revivalism, underway in many schooling spaces, is usually at work in the teaching content (history and science have become most susceptible) but also in teaching and reinforcing a set of values. Implicit in this picture is the figure of an authority, a strong teacher who commands reverence.

It was hardly a surprise, therefore, when PM Modi decided to assume the role of a strong teaching authority and addressed Indian school children and teachers on the occasion of Teachers’ Day on 5 September 2014. A number of relevant critiques of this conversation-staged-as-spectacle have highlighted the overt and subtle messages of the address. While the entire address deserves to be systematically analysed in every small detail, it is useful to turn to a handful of issues that allow us a peek into the ways in which teaching is understood.

First, even as he was being respectful to teachers, the Prime Minister’s views on teaching were archaic, simplistic, self-contradicting and of a feel-good variety. For instance, he went on to state that teaching is not a ‘career’ in the traditional sense of the term; instead it is a life-long engagement on the part of the teacher.

“How many marriages [of your students] have you attended?” he asked the teachers, emphasising the need to cultivate student-teacher relationship beyond formal contexts. This extension of teaching into informal realms is expected without discussing financial security and working conditions of teachers. The grand proclamation of ‘teaching is more than just a career’ is followed by a curiously contradictory observation that teaching is no longer an attractive profession or a career worth fighting for.

Referring to the sorry state of teaching, the PM went on to call upon the professionals such as lawyers, bureaucrats and doctors to spend an hour a week teaching young children. While this may indeed turn out to be a great weekend hobby for many successful professionals, the feel-good gesture would surely have been lost on the government teachers buried under the weight of numerous responsibilities.

Girls’ education found considerable space and numerous mentions in the address on Teachers’ Day. The repeated concerns about girls’ education, however, were again framed in strict patriarchal terms. Ignoring the long history of women’s participation in institutions of learning and the complexities and challenges involved therein, the PM chose to offer a TV-serial-style explanation: Girls’ education is important because it helps both the natal and marital families! 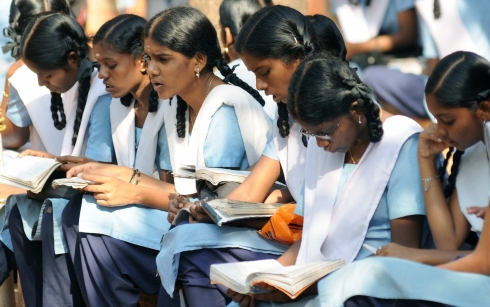 Pic: B A Raju. (India Together files)

The anecdotes, parables, prank-stories and motivational quotes were a candid mirror to what the current regime thinks of teaching, learning and education.

Simplification of teaching is hardly new; neither are the fixed ways in which teachers’ work is understood. In this context, it is good to turn to Prof. Krishna Kumar’s book, Political Agenda of Education, which opens with a powerful capture of the double-bind of authority that is central to teachers’ work.

The book opens with a narration of a fairly common phenomenon: school children, on a formal excursion to a zoo, hurl stones at the animals and some teachers accompanying them choose to ignore this behaviour. As long as the students do not ‘break the lines’, the violence is condoned, but the teachers swing into action if students disrupt the codes of order. This instance points out how teachers’ work often involves maintaining order even if it comes at the cost of ignoring violence and compromising curiosity.

Why worry about teaching then? And why now? A quick look at the developments in the past few months indicates several shifts that are underway. From changes in the duration of teacher education courses to talk of ‘exporting’ teachers, and from an increased blurring of boundaries between history and mythology to cultural (non) explanations of science, the spheres of teaching and learning are being re-drawn in the service of different agendas.

The dual approach of heavy-handed cultural prescription of content on the one hand, and greater privatisation, contractualisation of teachers’ work on the other, will continue to affect teaching. If the developments over the last six months are any indication, the double-bind of authority is not likely to get any lighter on teachers.

However, the current conditions are sure to bring teachable moments and several crucial questions: What constitutes science and scientific outlook? What is the pedagogic relevance of myths? What kind of culture should our educational institutions aspire to create? How do the new entrants to the formal systems of education see these spaces?

Engaging with these and similar questions and translating them in classroom contexts can perhaps be a part of the re-articulation of the purpose of teaching in contemporary times. Moving away from the glossy, clichéd conception of teaching, such a re-articulation will be based on a recognition that teaching is every bit an intellectual and cultural vocation.

The Campaign to Stop Funding Hate

A Spreading of Network

The Foreign Exchange of Hate

Darak, K. (2014) Teachers Day Marked in the Modi Way: The Hidden Curriculum of the Masterclass. Economic and Political Weekly (XLIX:40)

Who Will Broaden Their Horizons?

Off the Mark: Why were teachers ignored in Modi’s teacher’s day speech?