Cheerleading, rather than critiquing

Scathing in his indictment of state holdings in television, Nalin Mehta fails to note that commercial uses too can restrict its social potential. Romit Chowdhury reviews India on Television.
22 September 2009 -

A great deal of communication scholarship has theorised the Indian state's monopoly over the broadcasting network. Up to 1995, the state justified this, arguing that its control over television was necessary to ensure it remained an important aid in engendering 'development' and 'modernisation'; to promote a unified national identity, and to preserve indigenous cultures from foreign invasion. Considering this history, there is a definite paucity of scholarly engagement with what has transpired in the post-satellite period.

Nalin Mehta's India on Television attempts to fill this gap by examining the interaction between television, globalisation and capitalism and its implications for national politics and democracy. Seeking to move beyond simplistic theoretical frameworks that analyse media and culture through the prism of a dominant centre and exploited periphery, Mehta claims to demonstrate a more complex relationship between post-satellite television in India and changes in the country's socio-political landscape.

If such a relationship were revealed, it would have been a strong contribution. Instead, most of Mehta's analyses, despite his many caveats about the need for a nuanced understanding of globalisation, free market economics and newer forms of democratic collectives (supposedly made possible by the media), lapse into an uncomplicated and optimistic championing of neo-liberal capitalism.

The evolution of the medium

Chapter 1 provides a historical overview of the state's relationship with television and broadcasting before liberalisation - from Nehru's distrust of television as callous luxury and consequent neglect of the medium, through the growth of television advertising in the 70s, its use as political tool by Indira Gandhi, to television finally becoming a mass medium in the 80s. Mehta elaborates how Indira Gandhi recognised television's potential for mass appeal and used screenings of popular films like Bobby to deter the masses from attending rallies by opposition parties.

Largely, however, the medium continued to be the state's development strategy for family planning, improving agricultural practices and forging national integration. It was only in 1976 that television was separated from All India Radio into a separate entity - Doordarshan - and advertising was allowed. It is with the commercialisation of Doordarshan and the reduction of import duties on television in the 80s that the medium reached the new middle classes.

In its early years television was largely part of the state's development strategy for family planning, improving agricultural practices and forging national integration.

•  Media and people power
•  Whose media are they?

And then came the boom. India went from having one television network in 1992 to 300 channels by 2006. In the second chapter, Mehta argues that this change, far from being a mere technological by-product of the economic reforms, resulted from the convergence of myriad political, economic and technological factors. He lays open how the state's acceptance of satellite television was attended by an unwillingness to forego the reign of broadcasting control. As a strategy to deal with the state's unease about televising live news, NDTV was forced to introduce a five-minute delay in its daily half-hour live news bulletin, so as to theoretically allow censors to monitor private transmission.

Mehta also alleges that digitisation in the past decade has levelled the playing field such that local participants are able to compete with global outfits. Chapter 3 pursues this line of reasoning to state that Indian broadcasters have succeeded in assuming dominant positions in partnerships with foreign ventures. While this has given Indian media houses access to global resources, their editorial policies, Mehta claims, have in no way been impacted by these partnerships.

It is curious that the important fact of the Murdochisation of television networks seems to have entirely passed Mehta by. This refusal to acknowledge political journalism's transformation from a public service orientation to a profit-making programme, shows up a naÃ¯ve championing of a dominant neo-liberal ideology without considering the many ways in which it consolidated global media clients even as it pushed the invisible further into the margins.

Mehta's exposition of advertising in news channels as having created a powerful televisual public comprises the fourth chapter. Using a business model approach, he speaks of how subscription revenues are lost to cable operators and hence channels have to depend on advertising returns to sustain them. He also shows the emergence of the Television Audience Measurement System as the only measurable currency to judge the success of programs and ably critiques the system for its urban bias and focus on higher income households. One of the ways in which news channels are trying to garner popularity, he says, is to create spaces for lifestyle programmes and crime reporting.

Surprisingly, Mehta does not register any discomfort with news channels' sensational treatment of crime reporting as a thrilling mystery film and its elision of public responsibility in crime news reportage.

Chapter 5 elaborates how in recognition of the popularity of cricket as cutting across a wide cross-section of viewership, news media have increasingly enlisted cricketers and cricket related programmes to cash in on the game's pan-Indian appeal. Mehta's thesis on the popular cricket-news programme Match ka Mujrim, is that it recreates the social practice of the adda on the televisual space. The heated discussions among people in chai-stalls are thus, recreated on television. This Indianisation of cricket is, according to Mehta, an evidence of globalisation empowering the local.

It is here that Mehta's understanding of modernity and globalisation is most disappointing. Adda as it occurs in Kolkata is not simply a matter of heated debate but a social practice that has complex implications for modernity, its celebration of work as virtue. In its lack of any fixity of purpose and venue, adda constitutes a stringent critique of modernity's focus on utility and productivity. Furthermore, the spaces of adda, particularly the rowak, reconfigure the modern division of public and private space. The 'SMS-adda' that Mehta valorises uncritically fails to accommodate these complexities. 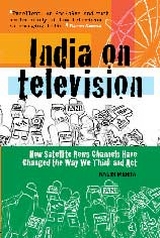 To draw a direct causal link between arguments on television talk shows and a strengthening of democracy exaggerates the medium's importance.

•  Media and people power
•  Whose media are they?

Furthermore, when he uses the 'cricketisation of news' as an instance of globalisation reclaiming the local, he neglects several imperative considerations - global conglomerates 'going native' to give a nationalist face to the processes of globalisation, the use of localisation strategies to augment business imperatives and an indigenous invention of 'globality' through the deployment of nationalist narratives.

In chapter 6, the author links the emergence of television news talk shows with a deepening of liberal democratic processes. Talks shows' use of the argumentative tradition is posited as television's recreation of a public sphere accessible to all and critically engaging with issues of governance. The criticism of Habermas' notion of public sphere holds true for this explanations as well. Those who we see on television talk shows are, after all, the privileged elites. Far from encouraging civic engagement with public policy debates, these often reflect the dominant ideology in the unwritten censorship of who are invited to these talk shows and what they say.

Furthermore, to draw a direct causal link between arguments on television talk shows and a strengthening of democracy silences the various civil society collectives and social movements that have contributed to this process.

In the final chapter, the author brings his preceding arguments together to make a case study of the Gujarat riots of 2002. The author demonstrates how Narendra Modi, through the successful manipulation of the medium, was able to use the riot coverage to his advantage despite the clear anti-BJP slant of reportage. Even here, the author's engagement with riot reportage, rather than exploring the ethics of representation and the limits to what the media can show in the face of commercial and state pressure, becomes a self-congratulatory portrayal of evolved journalistic practice.

While he is rigourous in his overview of the development of television in the post-satellite period and suitably dense in statistical data, where Mehta fails is in bringing a nuanced critical thrust to bear upon his analysis. This is evident throughout the book. For instance, when he talks of advertisers seeking not just viewers but viewers with purchasing power, he fails to criticise this conversion of citizens to consumers. Indeed the sense one gets is that he does not consider this a problem. Nowhere is the impact of advertising on the critical function of the media examined. Rather, what crystallises his focus is the business principle underlying advertisements on television.

His explicit unwillingness to borrow from critical theory stems not from an understanding of lapses in these arguments but because he feels it is time to go beyond them. Mehta avers that advertising has created a powerful televisual public, allowing citizens to be empowered actors in the theatre of democracy. While one recognises the need to go beyond an understanding of media images simply as devices manufacturing consent in the viewing public, it is imperative that this does not whittle down to an uncritical celebration of the media shining in the light of realised democratic ideals, and an equation of commodity images with development.

Regrettably, this is what happens. Scathing in his indictment of state holdings in the media, Mehta fails to acknowledge that commercial uses of television, no less, can and do restrict the social uses of the medium. As such, India on Television ends up merely adding to the existing hegemonic political culture.

India on Television: How Satellite News Channels Have Changed the Way We Think and Act