WOMEN / WOMEN AND THE STATE

The women whose voices we seek to stifle, but can’t

High rhetoric and token gestures abound on International Women’s Day. Yet, a brave woman of the soil was threatened, attacked and prevented from holding a rally that would have voiced the real issues faced by many women. Freny Manecksha met Soni Sori days before she was attacked, and recounts her story.
08 March 2016 -

Today – March 8, International Women’s Day – was when Soni Sori had planned to have a public function in Jagdalpur with many women participants. It was to be the culmination of her proposed padayatra beginning from Bijapur district in Bastar, Chhatisgarh that has seen renewed incidences of violence against unarmed Adivasi civilian populations ever since anti-Naxal drives were intensified and IG S.R.P Kalluri took over. The incidences include allegations of a fake encounter in Mardum in which a farmer Hidma was killed and three separate episodes of sexual violence in Pedagalur in October and in Kunna and Nendra in January.

I had spoken with Sori, the Adivasi leader and member of the Aam Aadmi Party (AAP) in Jagdalpur on February 18 and 19, just two days before assailants attacked her and smeared her face with a substance containing chemicals. 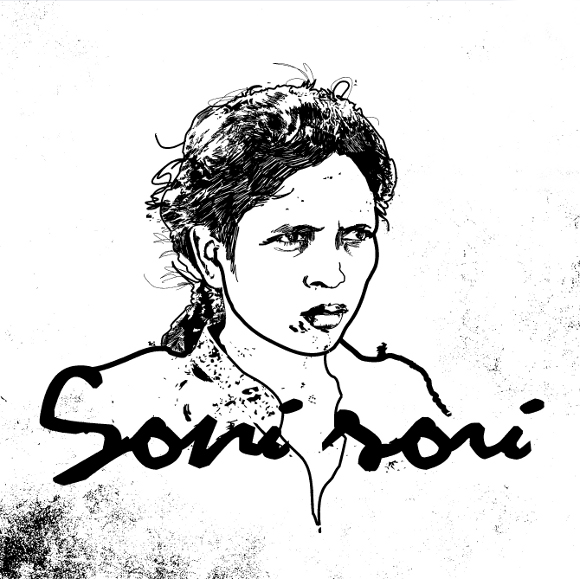 Sori had told me that the reason behind her proposed padayatra was to highlight the atrocities against unarmed Adivasi populations and the plight of hundreds of Adivasis incarcerated in the jails on trumped up charges, namely that of being Naxalites.

Sori speaks out vociferously, having undergone these horrific experiences first hand. A school teacher, in her forties, she is the daughter of a local Congressman who once served as sarpanch. In 2010, following an attack on local Congressman, Avdesh Gautam, warrants were issued against Sori, her husband Anil Futane and nephew implicating them in the attack. She was later acquitted by the court.

A study by the Jagdalpur Legal Aid Group shows that it is not uncommon for innocent Adivasis in Dantewada to be singled out and arrested in group crimes (more than five accused). Severe charges are brought and bail is seldom granted but eventually most are acquitted. In 2013, there was complete acquittal in 96 per cent of such cases.

Why were the police singling out Sori repeatedly? Was it because she had perhaps spurned the offer of acting as a police informer? Or were there fears that her nephew Lingaram Kopdi, who had gone to Delhi to study and train in media, would then be in a position to highlight atrocities against his Adivasi community?

In August 2011, the police charged Lingaram and Sori of multiple crimes, including that of acting as conduits for protection money given by Essar, the mining and energy company, to Maoists for safeguard of the iron ore pipeline that carries slurry from Bailadilla.  Lingaram Kopdi was arrested near a village and Sori who had gone to Delhi was arrested there on 4 October, 2011 and transferred to Dantewada police custody.

Here, she says, she was tortured and sexually abused by District Police Superintendent Ankit Garg, who stripped her naked and hurled abuses. Sori chose not to remain silent. Through letters to her lawyer she spoke out against such sexual violence that continued even when she was in the Raipur jail. Recently, when I met her, Sori told me that she did not believe any woman should feel a sense of shame in talking out about sexual violence inflicted on her. Shame was something that the accused should feel.

Despite a huge outcry by women’s groups and organisations, no action was taken against the police and Ankit Garg was actually rewarded with a medal for gallantry.

Indeed, no action or inquiry was undertaken against the police although evidence by the Kolkata Medical College team proved Sori’s accusation that she was tortured, with stones being pushed up her vagina and rectum.

The horrific experiences in jail helped mould Sori into a formidable figure of resistance. She highlighted the deplorable conditions in jails and the injustices of the criminal justice system in a conflict zone. Not only did she write letters outlining the human rights violations, but she also went on a hunger strike in the Raipur jail.

Sori’s outspokenness helped focus attention on jail detenues and her own deteriorating condition. Several national and international human rights groups made fervent appeals for Sori’s release on March 8 of 2012 and 2013. But the pleas were not heeded. Interestingly, Essar company manager DVCS Verma and a contractor B K Lala, who were also arrested in the same Essar case, were given bail much earlier than Sori.

Her deteriorating health was brought to the attention of the court and she was hospitalised at AIIMS for a brief while. During her incarceration in jail, her mother and husband passed away.

Soni Sori was finally released on bail on 12 November, 2013. Initially, she was not allowed to go to Chhatisgarh, as police claimed investigations were ongoing but later she was able to return home. Since then, she has been acquitted in six of the cases lodged against her.

Since her release she has been even more active in trying to bring attention to the blatant human rights abuses that continue relentlessly. Far from being cowed down by her experiences in jail she says it has only helped to bring out the steel in her.

“How do you fashion a good weapon? By tempering it with fire. That is what happened with me. I lost my fears in jail,” she told me.

And by extending her own personal experience, Sori has been able to bring about a strong perspective on gender issues in a conflict zone. In an interview (to Sabrangindia) Sori speaks of how the Bastar story is not just about her but about how the women there have been subjected to all kinds of violence.

In the same interview, she observes how the conflict has impacted women in general. Men are now scared of being picked up by security troops and are forced to stay at home. Sowing, harvesting, going to the forest for firewood, going to the markets – it is the women who have to do all this. When combing operations take place it is the women who must bear the brunt of the violence of the security troops, because the men have to flee.

Recently, Sori played a major role in helping the women of Kunna testify against the violence on 15 January when six Adivasi women from Kunna village in Sukma district were stripped and sexually assaulted on 12 January.

Indeed, in a fine illustration of joining hands, lawyers of the Jagdalpur Legal Aid Group, activists including Bela Bhatia of Women Against Sexual Violence and State Repression and several journalists were able to draw attention to such atrocities.

Shortly thereafter,Sori began getting threats. Journalist Malini Subramaniam stationed in Jagdalpur and the Jagdalpur Legal Aid Group were forced to leave because of continued intimidation by the Samaj Ekta Manch, a vigilante group and sustained police pressure on their landlords and domestic helps and all those who associated with them.

I was there on the evening of 20 February when Sori came to bid an emotional farewell to the Jagdalpur Legal Aid Group lawyers. She told us that she had been receiving threats of an assault that day and had informed the authorities. She left on a two-wheeler being driven by Rinky, another young woman.

Near Geedham, two men accosted them and smeared a chemical substance on Sori’s face, which caused burns and immense swelling. Later, she was shifted from Jagdalpur hospital to Delhi.

She is now out of the ICU and improving. She may not have been able to hold a rally in Jagdalpur. But she has rallied a number of people around her cause and that of the women of Bastar. Her spirit remains unbroken. Even in acute pain caused by oedema,unable to open her eyes and her voice impaired, Sori was insistent on speaking out. She will not be silenced.