ENVIRONMENT / EYES ON THE FORESTS

A Jindal group-Government of Tamilnadu firm attempted to get forest clearance for mining in the Eastern Ghats forests of TN. Both the Ministry of Environment and a Supreme Court monitoring committee rejected clearance. Kanchi Kohli has more.
21 October 2009 -

Kanjamalai, one of the last remaining patches of the Eastern Ghats forests in Salem District of Tamilnadu was in the news recently. A Supreme Court monitoring committee has strongly recommended against the grant of forest clearance to a joint venture firm between the Jindal group and the Government of Tamilnadu for mining of iron ore safely cuddled away under the vegetation. But the fact that these forests are being closely watched for excavation since the 1960s, is far from a reason to celebrate. 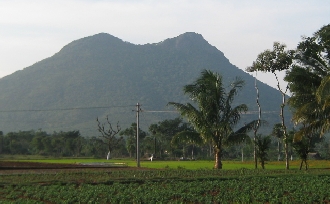 Kanjimalai hills in Salem district of Tamilnadu. The forests have been eyed by steel and iron ore mining firms for several decades. Pic: Piyush Sethia.

If any forest area of India is to be diverted or used for non-forest use such as mining, dam building, industry and so on, an application has to be filed for forest clearance before the Union Ministry of Environment and Forests (MoEF). This procedure is prescribed under the Forest (Conservation) Act, 1980. So, when the Tamilnadu Iron Ore Mining Corporation Ltd (TIMCO) that sought to mine the forest of Kanjamalai (Salem district) and Kavuthimalai (Thiruvannamalai district) needed to seek requisite forest clearance. For this they would have procedurally approached the Tamilnadu Strate Government through whom an application of diversion would have been forwarded to MoEF. ( Both districts are in north Tamilnadu.)

But TIMCO chose a different path, one that is being frequented by project proponents. Instead of waiting for the bureaucratic formalities to be completed, TIMCO filed an Interlocutory Application (IA) before the forest bench of the Supreme Court of India, as part of the ongoing case of T N Godavarman Thirumulpad v/s Union of India. Since 1996, this case has had a strong bearing on forest governance and policy in India. It was in 12 December 1996 order that the Supreme Court rendered the definition of forest as its dictionary meaning. So, any forest area where this meaning applied would need to seek a clearance under the FCA before it could be used for any other purpose (see www.forestcaseindia.org).

It is not clear as to when the practice of filing IAs directly before the Godavarman bench actually started. TIMCO did this, even as the MoEFs regional office in Bangalore was looking into the clearance application for mining in both forests, following the latters site inspections in early 2008.

In going to the apex court simultaneously, TIMCO apparently sought pre-empt any ligitation on the grant of forest clearance and seek directions from the Supreme Court itself for grant of clearance. Such IAs are often filed in addition to pending forest clearance applications or stand alone procedures. This they perhaps feel would help expedite matters at the bureaucratic level, where applications are to be recommended first from the state government and then MoEF's Forest Advisory Committee (FAC) before a clearance letter can be issued.

In the TIMCO's case, the plan seems to have gone awry. As per routine procedure, the forest bench at the Supreme Court transferred the matter in February 2008 to its Central Empowered Committee (CEC) to look closer into the application and make recommendations.

Out of TIMCO's estimated equity capital of Rs.135 crores, Rs.1.35 crores is Tamilnadu's state-owned TIDCO's share. This amount will also be disinvested at the end of three years.

The CEC went into the history of the project, its financial negotiations, the public protest, environmental and social impacts. It also undertook a site report in May 2008. The June 2009 CEC report highlights that all this will be at the cost of the critical forest belt, local livelihoods and the state government subsidising the private interests of Jindal Vijayanagar Steel Ltd., Karnataka (JVSL). It revealed that the implementation of the project has an embedded agenda which in the long run is primarily beneficial to a private sector body. The CEC came out strongly against the grant of forest clearance to the company based on straightforward facts and arguments.

A slice of TIMCOs history

TIMCO was set up following an agreement between Tamilnadu Industrial Development Corporation (TIDCO) and Jindal Vijayanagar Steel Ltd., Karnataka (JVSL) in April 2005. This was following TIDCO's call for proposals seeking expression of interest for setting up mining, benefication and pelletisation operations of low grade iron ore deposits available in Kanjamalai and Kavuthimalai reserved forests. The forests have an estimated iron ore reserves of 75 and 35 million tonnes respectively.

The Kanjimalai area was reserved for iron ore mining by the Ministry of Mines, Government of India way back in 1960 vide a notification. In 1999, TIDCO had applied for iron ore mining lease for a period of 30 years over an area of 1000 hectares of Kanjamalai Reserved Forest. However, following the setting up of TIMCO (where TIDCO is a party), the Government of Tamilnadu requested the Government of India to relax the reservation and consider the application earlier filed by TIDCO in favour of TIMCO, which is currently pending.

Similarly, in 2000, TIDCO had separately applied for the grant of the mining lease over an area of 325 hectares in Kavuthimalai and Veddiappanmalai Reserved Forest in District Thiruvannamalai. In 2006, the state government requested that this be transferred in the name of TIMCO and the approval was granted.

Mining agenda under question by CEC

The Supreme Courts CEC report of June 2009 refers to this site inspection report related to the Kanjimalai forests and quotes this about the region:

The area is an isolated block of Reserved Forest of about 2000 hectares surrounded by agricultural land of the nearby villages and there is no other forest area in the vicinity. Vegetation is fairly dense on foothills all around. There are a number of seasonal streams in the area. The forest is intact without any disturbance and the vegetation is well protected by the Forest Department as well as by the villagers as this forest is the main source of water for crop cultivation. It has also been stated that if in this pristine environment, open cast mining activities are such as air quality, water quality and its availability for agricultural crops. Besides it is bound to affect the health of the local population. The forest area forms the catchment for the agricultural land down the hills, streams and waterways arising from the hills are draining to the agricultural fields.

Further, the project involves the felling of 90,537 trees (including 11,088 naturally grown trees) and the Regional Office of the MoEF has shown its inability to recommend the proposal for approval.  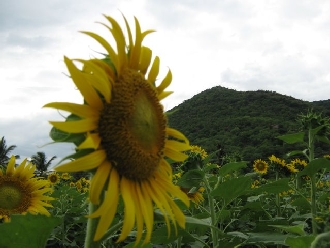 A sunflower blooms in the picturesque backdrop of the hills. Pic: Piyush Sethia.

In the case of the 325 hectares of Kavuthimalai Reserved Forest, the MoEF regional offices site inspection report states that the area around 8 kilometres from Thiruvannamalai town is undulated hills. A part of this area was afforested as part of a Japan Bank of International Cooperation funded afforestation programme of the Tamilnadu government. The vegetation is fairly dense and in fact there is no other forest area in the vicinity. If diverted for non-forest use, it would mean felling 2,22,000 naturally grown trees.

With the Regional Office of the MoEF having refused to recommend clearances in both reserved forests, the CEC report strongly questions TIMCO's intent and locus to file an application before the Supreme Court. The report highlights the fact that TIMCO has been promoted by two investment companies of the Jindal group. Out of its estimated equity capital of Rs.135 crore, Rs.1.35 crores will be invested by TIDCO. This amount will also be disinvested at the end of three years. The entire ownership and benefit of the project will finally vest with the TIMCO promoted by the investment companies of Jindal Group without any stake or benefit to either TIDCO or to the State Government, though all the permissions and approvals are bring sought/obtained by stating that it is a joint venture project of the State, says the CEC report.

Quite interestingly, while setting up of TIMCO was one of the conditions of this agreement, another was that JSVL will supply iron ore mined and manufactured out of the project to the Southern Iron and Steel Company Limited (SISCOL). A 22 February 2008 order of the High Court of Bombay has granted approval to the scheme of amalgamation of SISCOL and JSW Steel Limited (also a company of the Jindal group), around the same time that TIMCOs application for mining in the forests was under process at the MoEF. The implication was that company was planning to procure raw material at a lower cost from its own partner undertaking  which was setup as part of a public sector agreement with the Tamilnadu government -- rather than getting it from the market.

This did not go un-noticed by the Supreme Courts CEC. It wrote in its report: The CEC is of the view that the ecological cost of felling of more than 2 lakh naturally grown trees and the use of 325 hectares of undisturbed Reserved Forest for iron ore mining and pelletisation project far out-weighs the financial benefits that may accrue by way of reduced cost of raw material.

Thus, the CEC after ascertaining all facts stated in its report that it will not be in public interest to grant approval to TIMCO for mining in both the Kanjimalai and Kavuthimalai reserved forests.

Public outcry against the project

On the peoples side, the Kanjamalai Padagap Iyyakam has been in the forefront of the action against TIMCO's mining proposal. According to Piyush Sethia, an activist who works with the local group, The 150 villages comprising a population of around 3 lakh people have enormous pride over their self sufficient life styles. The 30000 acres of highly productive agricultural land which yield paddy, oilseeds, banana, sugarcane, cotton, vegetables, flowers, horticultural crops, tapioca, millets and pulses would lie redundant in the face of scarcity of water that would arise from the mining operation and the sludge would invariably make agricultural land infertile. The agricultural activity has been supported by 2500 pump sets and the water in the wells have been recharged by the sponge effect of the grasslands and green cover on the hill.

It appears that it is not just the Jindal group which had its eyes set on the iron ore deposits in the area. There have been news reports about Salem Steel Plant (SAIL) staking their claim backed by the Government of Tamilnadu. Furthermore, when TIDCO had first sought an expression of interest, there were three other bidders including the infamous Kudremukh Iron Ore Company Limited (KIOCL). KIOCL was disallowed to continue mining inside the Kudremukh National Park by the Supreme Court's Godavarman bench in 2002, after their mining lease had expired. This was on the grounds of the irreparable damage that was being caused to the rich biodiversity of the area.

In sum, while the CEC in its June 2009 report has upheld the cause of local livelihoods and sought to prevent any further ecological damage to the area at the cost of subsidising private interests, the final outcome of the recommendations is yet to be tested in the Supreme Court.