The kiss of Chikungunya

With government health machinery not being of help, distress-ridden peasantry in Vidarbha unable afford private health care are now falling victim to the Chikungunya viral fever. This is bad news for agriculture, with crops already devastated by floods and heavy rains recently, reports Jaideep Hardikar.
22 September 2006 -

Yavatmal & Amravati, Maharashtra: "Chikun Gunya Prasanna"! (With the blessings of Chikungunya)  That is what the sticker on the new Indica car of a rural doctor, who's a diploma in homoeopathy, reads, at a food joint on our way to Wadki, a town off the highway in Yavatmal's Maregaon block some 140 km from Nagpur city. 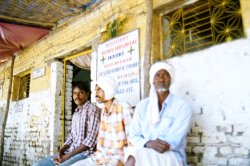 A couple of patients wait for their turn for a check-up outside the dilapidated OPD of the Sanjeevani rural Hospital in Wadki, the only hospital in the periphery of 50 km. Pic: Jaideep Hardikar.

Nothing unusual about it, explains Vilas Raut, ex-Sarpanch of Wadki. All of them are making huge money. "Many of them don't need to work for the rest of their lives," he says, "they've won a jackpot this season." Only, the jackpot of doctors is a near death for thousands of farmers here.

People in village after village in Vidarbha are down with Chikungunya, a type of viral fever caused by the bite of mosquitoes carrying the parasite. It's simply not weaning away. And there are no signs that it will fade away quickly.

"Farmers who are not committing suicide are dying this way," says Raut. Or will die after some time. "Scores of them are selling land, mortgaging the ornaments to lenders, selling cattle in distress, all for paying medical bills," he informs. The bills are running into several hundred rupees for treating a routine viral fever. "Because the first thing a rural doctor does when a patient comes in is put him on intravenous injections through saline."

Adds a stringer of a language daily: "I've lent money to some 50 farmers against gold." The stringer who pleads anonymity says he could not have turned down the farmers, because they needed cash for treatment. "I had no option, but to keep their ornaments as a security, and I know many of them won't be able to repay me the money I lent them without interest."

"It's happening in my village Jogalkhed in Akola district as well. Several families have had to sell portions of their land to raise money from health care; Chikungunya is crushing farmers," says Mohan Dhandge, a small time waiter working at a joint of the Haldirams in Nagpur. Dhandge left his village to eke out a living. His parents continue to do farming in his village. "This time when I visited my family, the village looked really bad."

With no signs of government health machinery around, rural patients are turning to private doctors, from allopaths to a host of others, for cure. But tens of thousands of them, already beaten by a distressing agrarian crisis, can't simply afford private health care costs. Some of them are dying.

Officially, close to 200 people have died of Chikungunya, but the actual count could be much larger.

It's not that the fever is fatally spreading like plague. It's simply that the distress-ridden peasantry can't afford health care in Vidarbha.

"People are helpless, they've no money," says Gautam Patil, an auto-driver from Khadki village. "That's because farming is not paying, almost everybody is in huge debt," he explains.

"We are doing at least 20 trips every day of Wadki and two of Sevagram, for transporting patients of Chikungunya." Guatam says he can't recall a time when he or any other auto-driver made so many rounds a day. An exhausted Gautam saw two sisters die from the want of medical attention in a village in the vicinity.

Seven more children died in the past month. He says he tried best to save Karishma Pandhari Uikey, 12 and her elder sister Laxmi, but both of them died in Sevagram in a month. Their father, a landless labourer, could not spend money on their cure.

Chikungunya never assumed such epidemic proportions in Vidarbha. And it never hit the beleaguered patients so fatally.

"People's immunity has gone down due to less food intake," explains Dr Milind Mane, a pediatrician and family doctor in Nagpur. Mane says the outbreak of disease and its proportion is unprecedented this time and has a link with the declining food intake of the farming families.

Officially, close to 200 people have died of Chikungunya, but the actual count could be much larger. Those deaths, as Kishor Tiwari of Vidarbha Jan Andolan Samiti puts it, were due to lack of medical aid. Tiwari says: "Tens of farmers simply can't afford it." This is the hidden face of the crisis, he explains. Farmers' suicide is simply the visible one.

Chikungunya is a bad news for the agriculture sector, this  after floods and heavy rains caused large-scale devastation of crops in some parts. For one, the paucity of labourers would affect farm activities the hard way. And two, it would also transfer the money from farmers to private hospitals. Which means a shift of money from rural to urban parts. With the state and central government budget on rural development already dwindling, the viral fever is actually stripping the peasantry off whatever little it owns.

In Wadki, for instance, six doctors have no time for lunch. "We can have it after some time," says Dr Surendra Thamke, a lone doctor and director of Sanjeevani Rural Hospital, a ten-bed ramshackle building of four rooms, where about eight patients, all farmers, lie in racking pain. Five other doctors in town are BHMS or DHMS, none of them an Allopath. 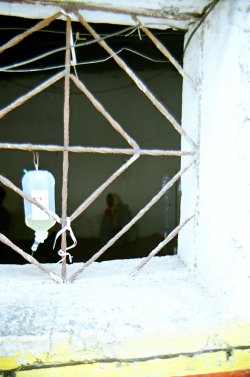 Saline bottle hangs from the window of a room in Sanjeevani Rural Hopsital at Wadki in Yavatmal, where Chikungunya patients have been queuing up for treatment for the last three months. In rural parts the gravity of your illness is usually gauged from the number of saline bottles you were administered. Pic: Jaideep Hardikar.

Dr Thamke says for the last three months, he's had an average 300 to 500 patients of Chikungunya come to his OPD (out patient department). "That's true of other doctors too," he informs. Given his fee of Rs.20, it means an average daily collection of Rs 6,000-10,000. The hospital made huge earnings, apart from charging for nursing, bed fee and other bills.

"If properly treated, the fever won't last more than three days, though the symptoms may remain for a month," explains Dr Thamke.

Last month, at its peak, the Sanjeevani rural hospital held three camps on its own; 10,500 patients turned up in those three days. The only pharmacy shop too got renovated from a cramped hut to a plush shop.

The despair Chikungunya has caused in the Vidarbha countryside, already hit by the spiraling agrarian crisis, is appalling. Regional news reports, health department data and estimates of private doctors all seem to indicate that around a million people, the majority of them farmers, may be down with the fever. This, at a time when the spraying season is about to start, or has just begun in some parts.