“What about our dreams of a free Tibet?”

The Election Commission of India has ordered states to include children of Tibetan refugees born in India between 1950 and 1987 in the electoral rolls. Ramesh Menon finds that even as they acknowledge India’s gesture, the right to vote creates a dilemma for them and leaves them with mixed emotions.
01 April 2014 -

For nearly a lakh of Tibetan refugees in India, it was an emotional moment when they came to know that India would allow them to vote just as any of their Indian friends. After having lived in India for decades as refugees, they felt they were finally being recognised as Indians after having fled Chinese repression in Tibet.

This move followed an August 2013 Karnataka High Court order which paved the way for granting Indian citizenship to Tibetan refugees. Tenzin Choephang Ling Rinpochwe who was born in India had been denied an Indian passport as he was of Tibetan origin. He went to the courts and secured an order granting it to him.

About one lakh Tibetan refugees live in India. But how many of them will vote? Only those who have chosen to take Indian citizenship and have voter ID cards will be able to vote.

Points out award winning writer and activist Tenszin Tsundue: “It might look magnanimous on India’s part to let Tibetans exercise their franchise, but it does not translate into all of them voting in the coming elections. They would first have to surrender their registration certificate that classifies them as foreigners in India. Only then can they apply for Indian citizenship. This process would take at least one and a half years, after which they would get their voter cards.”

The cumbersome process apart, the fact is that many of them are now torn between ends by the Election Commission of India’s order. Some feel that since they have spent decades as refugees in India, it makes sense to take Indian citizenship and put an end to the feeling of rootlessness. Many others feel that if they do that, it would destroy their six-decade-old campaign for an independent Tibet.

Ven Bagdro, was a political prisoner in China for four years as he had shouted a slogan asking China to get the Dalai Lama back into Tibet. This was on 5 March 1988 when China faced one of the biggest uprisings ever demanding a free Tibet.

When Bagdro was arrested he was made to stand barefoot on ice for 35 minutes. When he stepped out after that, the skin of his foot stuck to the ice and left him bleeding. He was beaten with electric batons and made to confess that he had killed a policeman during the protest. He says he confessed to escape the torture. He was then sentenced to three years in prison.

After his release, Bagdro trudged three months across the Himalayas to enter India. For the last 21 years, he has been living in Dharamshala and spends his time writing. He has authored 12 books and his latest is called, “A Hell on Earth”. Obviously, he is referring to what China has done to Tibetans.

Bagdro does not intend to vote. “India has shown that it treats us on par with Indians by allowing us the right to vote. But it has to continue supporting us in our fight for an independent Tibet. In fact, the world has to recognize the Tibet issue as it is a global question now,” he says. 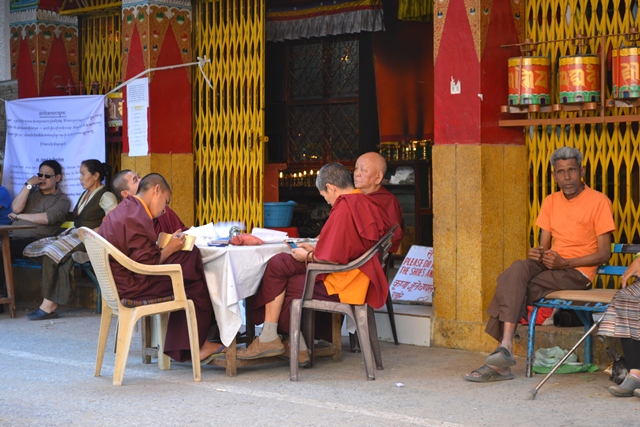 There are others like Tenzin Lhakyi, who runs a Tibetan restaurant in Majnu ka Tilla who wonders if taking Indian citizenship would deprive her of the many privileges that Tibetan refugees enjoy, such as scholarships and even opportunities to migrate abroad. She was born in Ladakh, but dreams of living in Tibet someday.

Lhakyi has not applied for a voter identity card and does not intend to either. Many of her friends have settled in Canada, the United States, Switzerland, Australia and Belgium. Others have taken advantage of Fulbright scholarships to study abroad. Her two brothers and four sisters have settled abroad. Maybe, one day, she will go too, she hopes.

As she manages her Tibetan restaurant in Majnu ka Tilla, her eyes glisten as she talks of how her father, Tsultrim Gyatso, 75, who was a monk in Tibet, survived 13 bullet wounds when he was fired at by the Chinese army while fleeing to India. Gyatso sells sweaters in Dehra Dun today.

“It is a miracle that he survived after those fleeing with him manually took out the bullets and nursed him. He had a pendant with the Dalai Lama’s picture in it. He thinks that the pendant saved him.

Every Tibetan in India will have a story to narrate,” she says, “as each one of us has surmounted different kinds of problems. How can we ever give up our dream of Tibet?”

Will voting rights mean the end of a dream?

Tenzin Tsundue echoes what many of the Tibetans feel, “Most of us do not want to become Indians as the struggle for an independent Tibet is sacred. This is the time for us to focus on our struggle and not get diverted by the lure of privileges that will make us forget our struggle. If we do that today, future generations will forget what the fight for Tibet was all about.”

Lobsang Yangtso, who is completing her doctorate in Chinese studies from the Jawaharlal Nehru University, came to India at the age of nine as her mother wanted her to study in a Tibetan school and not a Chinese one. “Even if I vote, I will still feel like a refugee in India as my family is in Tibet. Someday, I hope I will be able to go back,” she says.

Sherab Tsedor, 29, a Tibetan activist, was born in Delhi. He dreams of an independent Tibet every day. He has never been there and will not be able to secure a visa as he is on the Chinese watch list. He set himself on fire in November 2011 in front of the Chinese embassy demanding freedom for Tibet. Alert policemen managed to put out the fire but Sherab was hospitalized for many weeks and had to undergo 12 plastic surgeries on his left foot as it was badly damaged. Sherab has been involved in over 30 protests before the Chinese embassy and has spent seven jail terms at Tihar Jail for doing so.

Sherab feels it is a wonderful gesture on the part of India to reach out to the refugees, but wonders, “Will my vote affect the way I look at the freedom struggle? We must not dilute our fight for freedom. If we become Indians, how can we demand Tibet?”

Migmar Tsering, Secretary, Environment and Culture, Regional Tibetan Youth Congress, was born in Delhi 42 years ago. He still nurses memories of his first and only visit to Tibet at the age of nine. The images are still fresh in his mind. “I will never forget my trip to Kham via Lhasa. It was so clean and beautiful everywhere. The water in the rivers was sparkling. Tibet is another world.”

Migmar recounts how a Taiwanese leader once came to Majnu ka Tilla and tried to persuade them to look upon China as their country. “He brought along 500 blankets and 300 cartons of biscuits for distribution. People were so angry that they wanted to burn the blankets and cartons. But we said that we should instead sell it and use the money to further our fight for justice. We want a free country, not freebies.”

The notification by the Election Commission of India has triggered a lot of discussion in every street corner in Majnu ka Tilla. Everyone is talking about not just the option of voting in India, but of Tibet. Says Migmar, “Tibet must become independent. We are so different from the Chinese. Compare our culture, religion, beliefs, clothes, food and anything else. How can we not succeed? Look at movements all over the world. I may not see freedom, but my children and grandchildren will.”

Karten Tsering, 46, the president of the Residents Welfare Association of Majnu ka Tilla was born in Delhi. His father, Wangyal, 78, fled Tibet in 1959, when the Chinese occupied it. They stayed for a while in Arunachal and then came to Delhi where they lived in a slum. It was only in 1963 that they settled in Majnu ka Tilla. His parents lived a hard life and as they did not want Karten to grow up seeing that, they sent him off to the Central School for Tibetans in Himachal Pradesh.

Tsering says, “It is a wonderful gesture that we should be grateful for, as it shows that India recognizes and values us. But just because we vote in India, it should not mean that our fight for Tibet is over. There are thousands of Tibetans all over the world but none of them have given up on Tibet. If we were offered Chinese citizenship, we would have thought a thousand times, but why should we hesitate to take Indian citizenship?”

Majnu ka Tilla is only one of the many settlements of Tibetan refugees. Other big settlements are in Dharamshala and Mcleodganj. Residents in these settlements have managed to live in India for decades without diluting their culture and way of life. They have zealously guarded it, as it is the only way to keep reminding themselves of their ultimate goal of freeing Tibet.

While the move to let them exercise their franchise has created a flood of emotions, one thing that reigns is their resolve to continue their struggle. As Sherab says, “India took 200 years to achieve freedom. We have only been fighting for Tibet for the last  60 years.”

Ramesh Menon is managing editor, India Legal, a fortnightly magazine. He got the Ramnath Goenka Award for Excellence in Journalism for a piece that he did for India Together.