Mundra SEZ: Deemed, but not approved

The recent verdict of the Gujarat High Court regarding the operation of multipurpose industries on land leased out by the MPSEZ could have critical implications for environmental clearance of SEZs in general and the clause of “deemed approval” in particular. Kanchi Kohli reports.
25 February 2014 -

On 13 January 2014, the High Court of Gujarat passed a crucial decision, which amongst other things has an important bearing on three important aspects related to environmental approvals in India.

The first relates to whether individual units within Special Economic Zones (SEZ) can be leased land and carry out operations, if the SEZ itself does not have a legal environment clearance.

Second, can any industry assume that the absence of formal communication from the ministry, following the recommendation of the expert appraisal committee (EAC), may be treated as a deemed approval?

Third, how does a regulator deal with repeated instances of non-compliance?

This judgment was passed by a bench comprised of Chief Justice Bhaskar Bhattacharya and Justice J.B.Pardiwala relating to the multipurpose industries in the Mundra Port and SEZ (MPSEZ) Ltd in Mundra taluka of Kutch district of Gujarat.  The MPSEZ which is now known as the Adani Port and SEZ (APSEZ) Ltd is regarded by the Adani group as their crown jewel and the largest port in India. (See: http://www.adaniports.com/).

Farmers and grazers of Navinal village led by Gajubha (Gajendrasinh) Bhimaji Jadeja filed a case before the Gujarat High Court (Writ Petition (PIL) No.21 of 2013) stating that the MPSEZ Ltd does not have environmental clearance under the Environment Impact Assessment (EIA) Notification, 2006. However, MPSEZ granted leasehold rights in favour of 12 industrial units which have been operating within the SEZ from 2008 onwards. The case was argued by Advocate Anand Yagnik. 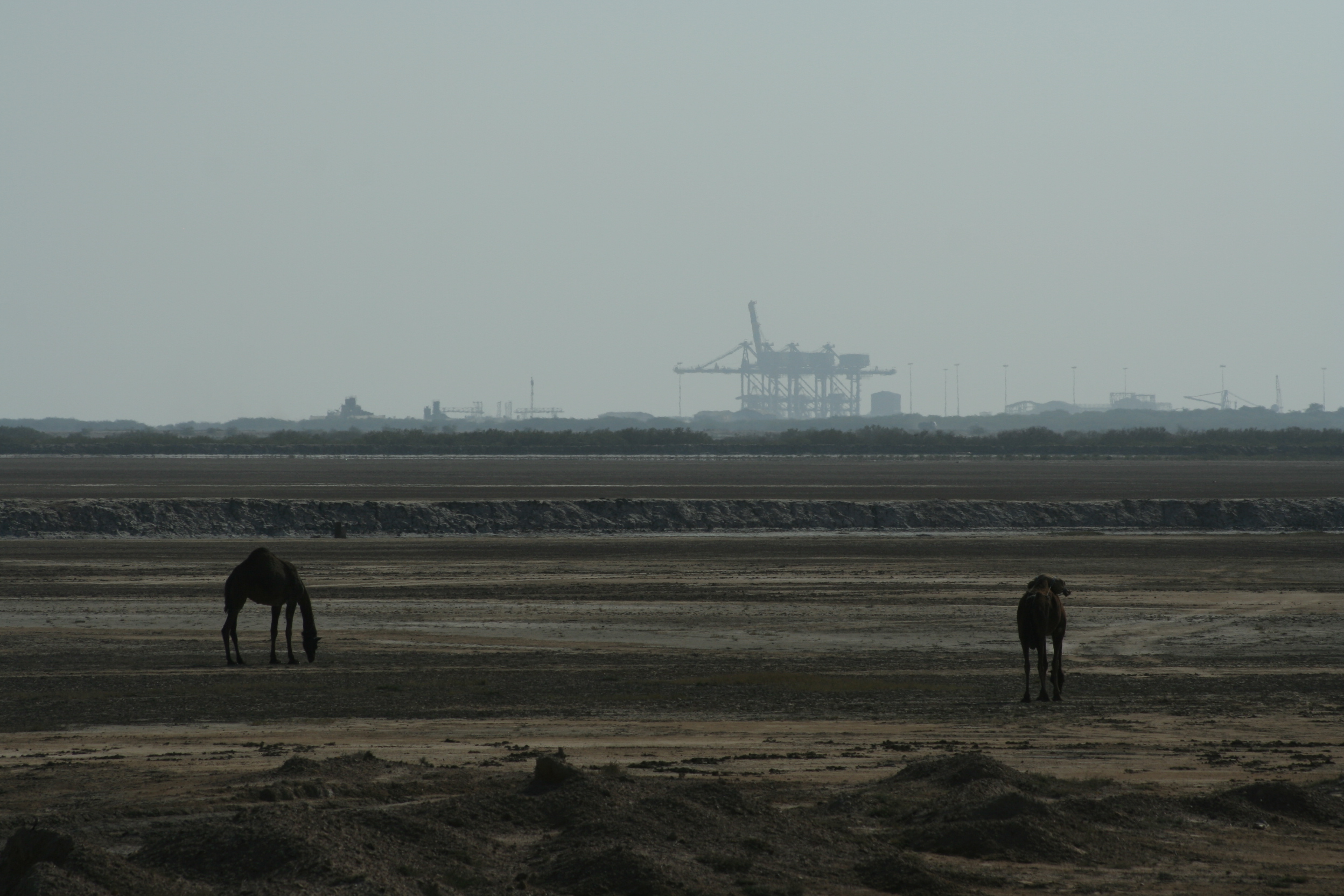 Grazing lands in the backdrop of the construction of one of the ports in the Mundra SEZ.

According to the petitioners this same issue was raised earlier in 2011 in another public interest litigation, which was decided upon by the same bench on 9 May 2012. The court had observed then that as long as the environment clearance was not granted to the MPSEZ, they couldn’t lease out “right of enjoyment of the infrastructural facilities to its lessee.”

According to the EIA notification, 2006, all SEZ projects or industrial estates are mandated by law to follow the due process of law (including an EIA and public hearing) before they can start operations or construction, following the grant of a formal approval. Individual projects within the SEZs don’t require separate environment clearance if they had already been a part of the SEZ proposal which was granted environmental clearance.

The mandatory public hearing for MPSEZ was held on 5 September 2010. However, the proposal was listed before the relevant Expert Appraisal Committee (EAC) on 16-17 April 2012, 4-5 June 2012 and 9-10 July 2012 respectively. In the last meeting, the EAC recommended to the MoEF that environment clearance be granted in favour of the MPSEZ, subject to conditions.

In the course of the most recent Court hearing, the MPSEZ and the individual units have argued (as recorded in the judgment) that even if a SEZ does not get environmental clearance, it would not bar individual units from setting up operations within the zone. This is if the units themselves have an environment clearance or if they don’t require the same, as in the case with the MPSEZ.

A few other developments between 2008 and now are of relevance in this context. In January 2009, the MPSEZ received approval for a Water Front Development Project (WFDP) amidst allegations from the affected community that the project had already started construction activity.

The clearance was issued for foreshore facilities and other “permissible” activities for the north, west, south and east ports for the MPSEZ, subject to 17 Specific Conditions and 14 General Conditions, which need to be mandatorily complied with according to law.

This issue was also raised at the National Environment Appellate Authority (NEAA) where the petitioners had raised several concerns related to poor assessment, violations and the large-scale impacts of the project. The case was however, decided in favour of MPSEZ, though it was explicitly recorded that there should be compliance of conditions laid out in the clearance letter.

So what we have now is a situation where individual units within the SEZ have been allotted land by the MPSEZ, which otherwise does not hold an environment clearance. The Gujarat High Court has not agreed to this and has asked the individual units which don’t have environment clearance to stop operations. However, equally relevant are the violations of individual approved units like the WFDP which have been recorded by numerous official and non-official committees.

The environmental clearance, for most projects including the SEZ, is granted under a general condition that warns the project authorities of the possibility of their approvals being recalled in case of non-compliance. The approval for the individual units of the MPSEZ, including the WFDP, also has this condition.

General Condition (x) of the WFPD lays down that “ The Ministry reserves the right to revoke this clearance, if any of the conditions stipulated are not complied with to the satisfaction of the Ministry.”

In December 2010, the MoEF issued a show cause notice to the MPSEZ, clearly recording non-compliance of the conditions related to environment and Coastal Regulation Zone (CRZ) clearances of the various activities of the company, including the WFDP project. This also included some activities for which either environment or CRZ clearances did not exist (No.10-138/2008-IA-III). The violations included destruction of mangroves, creeks as well as illegalities in construction. On both occasions, explanations were sought from the MPSEZ.

All this and more has been extensively recorded and substantiated with latest evidence in a community-led ground truthing of violations carried out by the Mundra Hitrakshak Manch (Forum for the Protection of Rights in Mundra), and submitted twice to the MoEF in 2012 and 2013.

Despite the knowledge of such non-compliance, the MPSEZ was allowed to go through a public hearing to seek environmental clearance for the SEZ. Moreover, even though there was an order of the Gujarat High Court in May 2012, the EAC proceedings did not consider any of the facts placed before the Court or the show cause notices while recommending approval to the SEZ.

In September 2012, the MoEF set up another committee under the Chairpersonship of Sunita Narain to again look into the environment impacts and violations of various projects of the MPSEZ, including the ports and the power plant. The committee, which submitted its final report to the Ministry in April 2013, recorded “there is incontrovertible evidence of violation of EC conditions and non-compliance.”

As next steps, the committee recommends the setting up of an eco-restoration fund and cancellation of the clearance to the North Port. Based on the committee’s findings another show cause notice was issued to the APSEZ Ltd in September 2013.

The issue of deemed approvals as dealt with in the present case is critical to almost all projects which are being appraised within the MoEF.  MPSEZ, during the course of the recent hearings, has submitted that since the MoEF did not send a formal reply to the company within 45 days as stipulated in Clause 8(iii) of EIA Notification, 2006, they now have a deemed approval. This is because the final recommendation of the EAC was in favour of the company.

The High Court has taken the view that the issue of deemed clearance was not argued in Writ Petition (PIL) No.194 of 2011 where the issue of no clearance of the MPSEZ Ltd was first raised (as mentioned earlier). The MPSEZ Ltd had never before pleaded in favour of deemed approval and has changed its stance only now.

The court has also taken an interesting view. In the present case, says the two-judge bench, the deemed approval clause does not hold because the issue is not only limited to the lack of communication from the MoEF within 45 days. The clearance of the MPSEZ Ltd is different primarily because it has already been recorded that the project was under construction without the grant of environment clearance.

To recapitulate, the public hearing had taken place in September 2010 and the project was only recommended for approval in July 2012. Meanwhile the proceedings in the 2011 PIL had begun and the court had issued a judgment recording the pre-clearance construction related violations in May 2012.

It therefore asked the MoEF to take a decision on whether environment clearance should be given to the MPSEZ Ltd and if yes, the terms and conditions on which it should be granted. Prior to taking the decision, the government was asked to take into consideration “the Sunita Narain Committee report as discussed in our judgment.”

The High Court stayed any further construction activities in the 12 individual units, which were operating without environmental clearance for one month. However, It made no mention of the WFDP project or the Adani power plant which had their own clearances, but did not have the right to be allotted land by the MPSEZ Ltd since the latter itself did not have the right to the property, as observed by the High Court.

The Supreme Court’s directions and submissions to the MoEF

The individual units operating within the SEZ have now received relief through an order of the Supreme Court in Special Leave to Appeal (Civil) No(s). 1526/2014, dated 27 January 2014. The SC has not made any further observations on how the MoEF should consider the approval and has allowed the ministry to seek more time if the process requires so.

Meanwhile, several villages residing within the SEZ boundary have written to the MoEF seeking remedies against non-compliance. Representatives from villages such as Dhrab, Siracha, Navinal, Mota Khanagara have demanded in their letters that the MPSEZ should not be granted approval till such time that violations such as blockage of creeks and destruction of mangroves are not duly addressed. Such non-compliance has had a severe impact on grazing activities in these villages. They have also sought a solution to the impacts on livelihoods due to the acquisition of grazing lands by MPSEZ.

The present case, while rooted to be a place-based conflict in an ecologically fragile and culturally diverse district, has several lessons not just for SEZ projects around the country but many others that might be in gross non-compliance of the rule of law. It also brings out the fact that despite repeated show cause notices, violations recorded by courts and official committees, and further evidence yielded by community led ground truthing, units within the SEZ can carry out business and operations as usual.

Can the MoEF or the court now take cognizance of the existing clearance condition that non-compliance can lead to revocation of approval? Can they also uphold the clause of the EIA notification that explicitly states that providing false and misleading data can make a project liable for rejection? If this precedence is set in place, it can actually be a landmark step on the part of the ministry that will be a deterrent against oft-recorded violations of environmental laws.

2. Ripping Off the Mundra Coast: A case study

Kanchi Kohli is an independent researcher and writer based in Delhi.