When the one who dies is a woman

Are the pressures which make male farmers commit suicide the same for women farmers as well? Socially, legally, with respect to property rights, and given their family positions, women are placed in situations strikingly different from those of men. Aparna Pallavi reports.
18 September 2007 -

When 50-year-old Shanta Vinayak Jadhav told a team of officials from Delhi who had come to 'study' the suicide situation in her village - Bothbodan in Yavatmal district of Maharashtra - that she would also commit suicide if she was not helped, the officials listened with polite irritation, mumbled a few words, and finally made a hasty retreat. Fifteen minutes later, Shanta set herself ablaze in the village square.

Why did Yamunabai Ade of village Salod Ramkrushnapur in the same district chose to drink insecticide early one morning? Her husband Ramdas does not know. He does not know how much debt she had incurred, and how she was managing the farm and family finances either. "I am uneducated and do not know sheti (agriculture) work," he says, "She was managing our three acres of land." He does not know whether her case has been accepted by the government as eligible for compensation, or not. He only knows he has not received any aid so far.

Are the pressures which make male farmers commit suicide the same for women farmers as well? Socially, legally, with respect to property rights, and given their family positions, in the farming communities of Vidarbha women are placed in situations strikingly different from those of men. How does this impact women's position as managers of land?

It has been noted from time to time that women farmers who have committed suicide have, for the most part, had one thing common with their male counterparts - a position of responsibility for the household income and finances. But a closer look at their cases reveals that the similarity ends there. For women farmers, the head-of-the-household position comes with a certain amount of additional baggage that their male counter-parts do not have to shoulder for the most part. 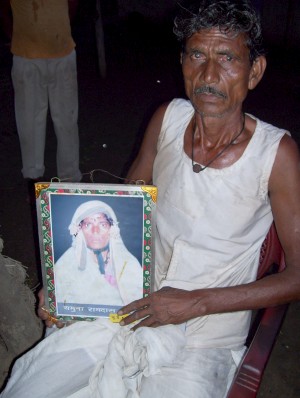 Yamunabai Ade's husband, with a picture of his wife who committed suicide
(Picture by Aparna Pallavi).

The most important part of this baggage is what, for want of a better term, could loosely be called 'husband impairment' or 'man impairment'. Some of these women are widows, while others have husbands or sons who are sick, unable to take responsibility, demented or absent. Consider the following cases:

Apart from the significant impact such impairment has on the emotional and physical well being of women, such pressures also have a way of placing social and economic shackles. Several women farmers in situations similar to the above-mentioned, when speaking to me, outlined how such a situation impairs a woman's social credibility.

"A woman who does not have a strong man backing her is looked upon with pity, but never with respect or trust," says Shahnaz Karim Khan of Barshi Takli village, Akola. Shahnaz's husband has been sick for four years, and her elder son, Muzaffar, who was managing the family's land, committed suicide last year. Shahnaz is now managing the family, the farm and the education of her two younger children. "A woman without a man does not get loans, labour, credit, anything. No one trusts a woman."

"A woman without a man does not get loans, labour, credit, anything. No one trusts a woman."

Suman Sukhdeo Dange of Nimgaon village in Buldhana district, agrees, "Who wants to get into trouble by helping the helpless?" she says resignedly, "If the woman can't pay up, then?" Since her 23-year-old son Pradip committed suicide one and a half-years ago, she has been taking care of her sick husband and managing her farm alone. "It is a terrible strain, you know," she says, "A strong man in the house is a must. A woman without a strong man has to keep her head bowed wherever she goes. I don't know how far I can pull on like this."

Mangala Suresh Akkalwar of village Bhamdevi in Washim district lost her husband and father-in-law in the last two years. "What hurts most," says she, her sobs breaking through her strong exterior, "is the absence of a man in the house. When my father-in-law was sick in bed, I could at least ask his advice about sowing, weeding or anything. People helped me in small ways out of respect for him. But now everyone ignores me. Even the labourers I employ do not listen to me."

The fallout of the absence of the 'strong man backing her' is most intensely evident in the case of Savita Kadu Kute. Savita, say her neighbours, was managing the family's 1.5 acres of land, and was facing problems because of the lack of irrigation facilities. But her in-laws, when contacted, aggressively denied that she was working the land, and even blamed her for the discord between her and her husband which led to his going away. "She did nothing," says her mother-in-law, "She would just stay in the house and eat, and now she has left her two daughters on our heads." What sort of pressures was Savita living with? There is no way to find out.

Savita's case also brings us to another important aspect related to suicides by women farmers - ineligibility for assistance. Not only her in-laws, but even the government has failed to recognize Savita's contribution to farming. Because the land she was farming was in her father-in-law's name - and not in her name or her husband's - her death has been declared as 'ineligible' for recognition as a farmer's suicide.

Savita is not alone. The eligibility criteria, which demands that the dead farmer should have land registered in his/her own or spouse's name, has led the government to strike numerous women's names off the eligibility list of farmers' suicides.

Take the case of Meenatai Agle from Matola village in Akola district. The eldest daughter-in-law of the Agle family, when Meenatai was married 14 years back, the family had 40 acres of land. After the property was divided a couple of years back, the burden of the entire loan taken by the family collectively fell on Meenatai's husband, who had to sell seven of his 13 acres of land to pay off the debt. The economic 'fall' of the family was drastic. When Meenatai died, her death was declared ineligible for compensation because even this land was in her husband's name, not her's, and also because the family no longer had any debts to show.

In Bothbdan, where four suicides by women farmers have been recorded, two have been declared ineligible on this criterion. 30-year-old Lata Ramesh Shelke drank poison in her farm while picking cotton, but her death was declared ineligible for aid, despite the fact that she and her husband had leased additional land, apart from the family land in her father-in-law's name. Sixty-five-year-old Gayabai Raisingh Rathod from the same village was also declared ineligible because the four acres of land she had been cultivating for the past 20 years, which should have been made out in her name years ago under the Land Ceiling Act, was still registered in the name of its previous owner.

Ironically, villagers allege that it was the repeated failures to get this land registered in her own name that finally caused Gayabai to crack under the burden and take the drastic step. Says sarpanch Anup Chavan, "Once every few months for the last many years we saw Gayabai making rounds of government offices in Yavatmal and coming back empty-handed. She had no money to bribe the officials. Who listens to poor, uneducated women in government offices anyway?"

Property matters are an important point of strain on women farmers. On the one hand the high registration costs, lack of acquaintance with official procedures, and corruption all make getting land registered in their own names an uphill task for women, while on the other, the lack of official property rights makes it impossible for them to access official credit for their farming activities. Gayabai, say villagers, had amassed private loans of Rs.25,000 at exorbitant rates of interest, which had brought her family to the brink of starvation.

The case of Shanta Jadhav, 50, mentioned earlier in this article, was similar. Shanta's four acres of land, says her son Shaligram, came from her paternal family. A total of 12 acres of land, which had been divided up unofficially between Shanta and her two brothers, was registered in her eldest brother's name. "Her name appeared on Form No 7, but not on Form No 12, as cultivator," explains Shaligram. Unable to pay up the registry charges and unable to access official credit, Shanta, like Gayabai, had acquired Rs.45,000 worth of private loans - besides a lot of frustration from making repeated trips to government offices. Her final, desperate plea unheard, Shanta took the drastic final step.

The suicides by women farmers have received hardly any official attention till date. No separate statistics on women's suicides are available with any official agency in the region. No official study on the suicide phenomenon has till date paid attention to the specific problems being faced by women cultivators. The numerous farm packages, full of holes as they are, also do not have any special provisions for women-specific problems, the major ones being the issues of land registration and access to credit. These issues need to be studied comprehensively, and a certain measure of sensitivity brought into the way women's problems in farm-management are handled, or their deaths will continue to rise.

Aparna Pallavi is a journalist based in Nagpur, and writes on development issues. She is working on 'The Feminine Face of the Vidarbha Agrarian Crisis' under a National Foundation for India fellowship.