Media reports that at the culmination of the Mathura-based Strike 1 corps exercise Shatrujeet conducted late last month, a parachute brigade comprising of 3000 soldiers was air dropped from the heavy-lift C-17 Globemaster-III, C 130 J Hercules, IL 76 and Antonov 32 aircrafts ‘deep inside the enemy's territory’.

The media goes on to quote Major General PC Thimmaya, the divisional commander of Red Eagle Division which is a part of the corps being exercised, as saying that it was ‘somewhat closer to what the allied forces did against Germany in the World War II’. He reportedly said, "It reaffirms Indian Army's strike capabilities with impunity."

It intrigues as to whether what was done in World War II be done in the nuclear age and that too with ‘impunity’. Can the Agra based 50 Parachute Brigade be deployed during conflict between the South Asian nuclear-armed powers in a paratroop role? 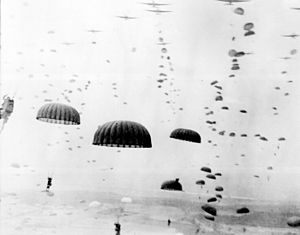 To seize and secure the bridge at Arnhem, the commander of  1 Airborne corps, General ‘Boy’ Browning dropped a parachute brigade at Arnhem and found two German panzer divisions recuperating at their dropping zones. The rest of the battle was immortalized in the book and movie aptly named, A Bridge Too Far.

The second image is of the fabled drop of the Indian parachute battalion, 2 Para, at Tangail in a bid to hasten the dash for Dhaka. The Paras were to cut off a retreating Pakistani brigade at a river bridge. The urgency of reaching Dhaka owed to rumours of the American 7th Fleet setting sail from the Pacific for the Bay of Bengal. Ending the war with an early capture of Dhaka became priority, whereas the initial war plan was only to capture enough territory to set up a Bangladeshi government.

The third image conjured up is from the Gulf War I in which the US military doctrine of the Cold War years, the AirLand battle – combined air and ground operations – was tested. General ‘Stormin’ Norman Schwarzkopf’s Operation Desert Storm  had as its trump card the ‘Hail Mary’ maneuver.

It was led by the General Frederick Frank’s VII corps moving in a wide arc from Saudi Arabia to get behind Saddam Hussain’s occupying forces in Kuwait. The US XVIII Airborne corps was to wheel on its open flank. Its 101st Airborne Division (Screaming Eagles) established Forward Operating Bases(FOB) Cobra and Viper well inside Iraq to enable XVIII Airborne corps’ French light armoured division and US’ 82nd Airborne Division to surge further ahead. These put paid to Saddam’s Republican Guard, chased down the Basra road by VII corps.

Finally, there is one more scenario, albeit a fictional one. General ‘Paddy’ S Padmanabhan post-retirement put his thoughts into his somewhat ambitiously titled book, The Writing on the Wall: India Checkmates America 2017. He has Special Indian Forces paradropping into Pakistan at the end of an India-Pakistan war set in 2017.

The four scenarios need to be seen against the single most significant factor in crisis and conflict today, the nuclear factor.

A World War II Operation Market Garden like scenario presumably would enable the Strike 1 corps, known to operate under the South Western Command, to gain the green belt astride River Indus once it gets past the semi-developed terrain opposite northern Rajasthan. To expect that this can be done with ‘impunity’ – presumably implying lack of nuclear threat or response from Pakistan – is self-delusional.

The second scenario has the Paras enabling quicker war termination on advantageous terms. In the 1971 War, the war aims expanded in scope with the success achieved by forces on the ground. If the Paras, now designated as Special Forces, are to be employed today, they risk a quicker lowering of the nuclear threshold by Pakistan. Fast forward to today, the air capabilities for deployment and employment of land forces enable tempting options in war. However, the implications these have on nuclear redlines would require moderating any enthusiasm for such options. The paradox is that the closer India gets to conventional military success the more vulnerable it gets to nuclear deterrence failure.

The third scenario resembles the closest possible employment of the parachute brigade practiced in exercise Shatrujeet. The US AirLand Battle concept dating to the late seventies has influenced all modern militaries, including Indian army’s massive mechanization dating to the same period. US successes in the two Gulf Wars understandably therefore also had doctrinal spinoff.

In his book, General Padmanabhan has the army cutting into Sindh. This can be enabled by the parachute brigade deploying ahead in ‘pivots’ or defended areas in enemy territory to, for instance, prevent counter movement by Pakistan’s reserves. This could enable the Strike corps to strike deep. Alternatively, it can be landed in aid of Baluch rebels further to the rear of Pakistani forces. If Pakistan’s posturing of its tactical nuclear weapons is to be taken seriously, such attempts would trigger its nuclear response. Not to take it seriously is to seriously misread nuclear weapons.

Finally, is the seemingly benign scenario in which Indian – and US – Special Forces take over Pakistan’s nuclear arsenal. This scenario has been trotted out time and again over the past ten years, primarily to scare Pakistan. And where US is concerned, to play ball in Afghanistan.

This has led to Pakistan gearing up its nuclear security to a large extent, making it a confident attendee at Obama’s nuclear security summits. In the fog of war and heat and dust of crisis, in case India and the US were to attempt to defang Pakistan – as anti-Pakistan armchair strategists fantasize – it could trigger unpredictable consequences.

Pakistan’s paranoia dates to the supposed Indian-Israeli threat to its nuclear status of the early eighties. Pakistan is already on record threatening retaliation towards India, whatever the source of the threat.

This analysis suggests that having the capability of deploying a para brigade into battle, howsoever impressive, is not an unmixed blessing. The intent is perhaps to deter Pakistan by showing it that India can dismember it once again as it did in 1971, irrespective of its tactical nuclear weapons.

However, Shatrujeet - the name of the exercise - means ‘one who conquers enemies’. Attempting such conquest now is only to risk mutual defeat. That this has not been grasped fully by the Indian military suggests that India has not quite moved into the twenty first century and the nuclear age.

Firdaus  Ahmed, a regular contributor, is author of Think South Asia and Subcontinental Musings (both CinnamonTeal 2014). He blogs at www.subcontinentalmusings.blogspot.in.