The ABC's of fighting AIDS

The main message that is going out to the masses is: use condoms. But this overlooks a fundamental reality about the values contained in that message, says Mirra Savara.
01 November 2004 -

With millions of rupees being spent on AIDS communication, it is imperative that at the same time we seriously examine what sort of messages we are propagating in the process. This is especially important because, of late, to talk about abstinence as a way to fight against AIDS has become controversial, decadent and tantamount to blasphemy! This is an amazing - and stupid - development in the battle against a serious disease. With new legislation on HIV/AIDS to be circulated in Parliament soon, the debate currently ongoing among AIDS activists in Bangkok makes it essential that we too take a critical look at, examine, and then decide what the primary message of our HIV/ AIDS communication should be.

So far, the main message that is going out to the masses is: use condoms. Extra-marital or pre-marital sex is not to be questioned, sex workers will be safe, all this as long as you use condoms. This was the result of the US-based perspective from the 1990s, that it is necessary to be totally objective (translation: don't have any value judgement) about what is to be called "unsafe sex." According to this view, behaviour that is not socially acceptable will simply go underground, and that will be most ruinous for the HIV epidemic. There is nothing that can be done about sexual promiscuity, and so it's best not to talk morals, values, and such. Instead, we'll just talk condoms.

Sometimes you begin to feel that the entire HIV/AIDS epidemic is mainly for the benefit of condom manufacturers! 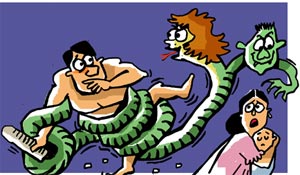 The language of this dominant message misses the most fundamental reality: all messages have an underlying value which they propagate and promote. While millions (if not billions) of dollars are being spent in India developing messages for all sectors of the population, there is precious little research to gauge what underlying values are communicated alongside. It would take a brave NGO/Government to actually put its own message under the microscope, and understand what is actually being said.

Granted, such research is not easy to do. However, some clues can be had from research that has been done elsewhere. An NGO in Thailand got attitudinal questionnaires filled out by the industrial workers for whom they were to run communication workshops. This was done before any of the workshops were conducted, and again after. They then ran their educational workshops, which consisted of lectures, discussions and a movie. Their unexpected findings: whereas before the workshop most workers had felt that it was not correct to go to sex workers, and they themselves would not, the percent of such workers who thought so went down after the workshops. Meaning, that the workshops had made going to sex workers more acceptable in the minds of the workers.

The message of the workshop clearly altered their social values. "If such a big organisation is showing us movies, and saying 'use condoms', [it] means that it is alright to go to sex workers", reasoned one of these workshop participants.

The message that the organization wanted to communicate, and what actually got communicated to the participants, were quite different. This was predictable; there are inevitably values underlying most of the messages that we are giving the youth, and other 'vulnerable' populations, and it should come as no surprise to see the recipients respond to the values instead of the messages. Starting right from primary education, where many state governments have started having 'sex education' for six year olds - something which got through without debate on the topic. These distortions are an indication of how the HIV/AIDS program needs a critical rethink.

The HIV/AIDS message sub consciously says that pre-marital sex is alright, as are post-marital affairs, and that going to paid sex workers is alright. Those who form the HIV/AIDS coterie in India just solemnly nod their heads, and in the presence of the Western donors do not mention issues like values. Gosh, that would be patently traditional. And backward!! And then we lament the growth of sexually transmitted diseases (STDs), HIV/AIDS and the growing numbers of abortions amongst adolescents.

I, for one, agree with what Ugandan President Yoweri Kaguta Museveni said at the 15th International AIDS Conference, "I look at Condoms as an improvisation, not a solution." His plea was that advocacy of "optimal relationships based on love and trust" should form the basic thrust of the message that should be propagated. Uganda's policy has been one of the rare success stories of Africa's war on AIDS, and concentrates on the ABC Method - Abstinence, Being faithful and Condoms, all together.

Health activists, including those from India, are aghast. Talking about abstinence would be revolutionary, when all these years all we've talked about is sex and the condom. Sex led to birth - no problem; we have birth control. Sex and HIV - no problem here too; we have the condom. No one denies that condoms, access to care, removing discriminations, are all important and crucial issues which need to be addressed. But what also needs to be considered - and considered seriously - is that the basic communication be put into a perspective and a direction.

Those who form the HIV/AIDS coterie in India just solemnly nod their heads, and in the presence of the Western donors do not mention issues like values.

One criticism of advocating strong values has been that this might worsen matters by driving the problem underground; i.e. it will become difficult to address the AIDS epidemic if many of those who have multiple sex partners or those who have the virus withdraw from the mainstream for fear of ostracism and ridicule. This fear is overstated - for centuries we avoided talking openly of sex, this didn't appear to change people's private sexual conduct in any documented way. Moreover, values reasoning isn't meant to be exclusive. It is to present it as one of the choices which is available. It is vital to put the discussion of sex within a framework without attaching a moral argument. It is important that morality not become the only element of advocacy, the way condoms currently are. The arguments over 'morals', thus, presents a false dichotomy; the moral arguments are most effective when used as an additional tool, rather than exclusively.

What is the direction and perspective that we want in India? First, we must recognize that the particular sort of communications that are around the HIV campaigns will impact social values, so there is a need to be extra aware. Excellent media research is essential to determine the effects of the messages are on different groups of people, in different areas, age groups, professions, between men and women, etc. And it is essential that such research be conducted by an independent group, because research can also be weak, politically correct and intended to deliver acceptable messages.

Messages will also have to be tailored to suit different populations, and situations. Some married women contract AIDS despite having a single partner that they trust; to speak of loyalty to such victims may achieve little. Nor is abstinence a factor in such situations. Greater awareness of their sexual vulnerability will help, and that message has to be imparted on its own merit. Abstinence is also not a simple message to take to sex workers, and any communication to this population has to acknowledge their social and economic reality.

These caveats notwithstanding, social communication differs significantly from consumer product communication. Hence the messages we are delivering could have greater consequences than we imagine. India is scheduled to embark on the third phase of the National AIDS Control Programme (NACP) later this year. This is an opportune moment to take stock, and carry out midcourse corrections, where necessary, in our national response to the AIDS epidemic.

India's epidemic is estimated to be the largest in the South and Southeast Asian region and the second largest in the world, with over 4.5 million people living with HIV by the close of 2002. The officially reported country-level HIV prevalence rate is less than one per cent in the adult population, a deceptively diminutive figure. Given the country's large population, even a 0.1 per cent increase in the HIV prevalence rate would increase the number of adults living with HIV by over half a million people. The NACP, meant to cover the whole country, is at present coordinated by a federal apex body within the Health Ministry - the National AIDS Control Organisation (NACO). The NACP and the activities of non-governmental AIDS Service Organisations are almost entirely run with donor assistance totalling pledges of over $800 million. While the effort is large - and growing, the likelihood of achieving the intended results is severely diminished when we adopt and propagate the wrong messages. It is time to change that.

Dr. Mirra Savara was funded by Ford Foundation to do research on Sexual Behaviour Patterns in Maharashtra in the 1990s. She has written 4 books and published 20 articles in journals and presented papers at international conferences. She is currently an independent consultant who conducts research and training for corporates and the social sector. She can be reached at mirra11@rediffmail.com