By bringing the benefits and the knowledge of science to their people, Haseena and Tajunnisa have helped secure the future for the resources on which their families depend. Their home, Agatti, has, now become a model, writes Papri Sri Raman.
10 March 2009 -

Kavaratti (WFS) - On January 29, Haseena and Tajunnisa, two young women from the beautiful Agatti island in Lakshadweep, received the 2008 Earth Heroes 'Young Naturalist' awards, given annually by 'Sanctuary' magazine in collaboration with the Royal Bank of Scotland. This unusual recognition came to these women, who are in their 20s, for their spectacular effort in mobilising a fishing community to become the keepers of nature. 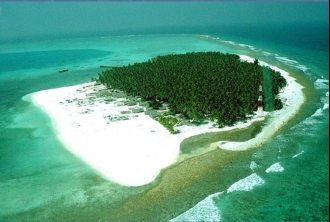 On the beautiful Agatti island, the women have got together to motivate the fishing community to become the keepers of nature and help in the conservation of the giant clam. Pic: Bombay Natural History Society\WFS.

Their story began five years ago, when the Mumbai-based Bombay Natural History Society (BNHS) was entrusted with the job of studying the giant clam in the waters off Lakshadweep's west coast.

Lakshadweep is India's smallest Union Territory, beginning about 250 kilometres west off the Kerala coast. It comprises 12 atolls, three reefs and five submerged banks. There are 36 tiny islands on these sub-marine banks, with a total area of just about 32 sq. kilomtres.

The islands are scattered and remote, each fringed by white coral sand and shallow lagoons protected by reef walls. They are the only coral islands in India. Ten of these are home to about 60,000 people. The island group's Gross Domestic Product from coconut, tuna, tourism, and sea-faring touches almost Rs.100 million, with the tuna canning factories concentrated on the Minicoy Island, the second largest and southern-most among the islands of the Lakshadweep archipelago.

More than 40,00,000 tons of tuna is caught in the Pacific and Atlantic oceans every year. In 2004, the Federal Drug Authority (FDA) frowned upon the intake of excessive tuna by pregnant women, nursing mothers and children, as it is believed to contain a large quantity of mercury. Light tuna, low in mercury content, is found off the Lakshadweep coast and this is now a thriving industry.

Tuna, a very large fish, feeds on small bait-fish, like minnow and anchovy. The availability of bait-fish is an indicator of the concentration of tuna in an area. Giant clams, too, live in association with bait-fish. The giant clam also harvested for food and as a curio, is listed as a 'vulnerable' species by the International Union for Conservation of Nature (IUCN).

"The BNHS-lead International Marine Protected Area project (funded by the Darwin Initiative) was to study the giant clam and try and develop conservation strategies for it, as also for bait and tuna off the Agatti coast by developing a community-managed reserve," says Deepak Apte, Assistant Director, BNHS. Apte, who is associated with the project, recently addressed a gathering of the International Collective in Support of Fishworkers in Chennai, which met to discuss the viability of India's marine protected areas.

"The community's high literacy and complete dependency on natural resources helped communicate the message of resource conservation and management."

The Agatti island, a small seven kilometre-long island, is highly vulnerable to ecological change. Says Apte, "When I went down to the site, I immediately realised that I had to take the local community into confidence. It is their local knowledge about the bio-diversity that would tell me where the coral, clam, bait-fish and tuna concentrations could be found."

Archaeological evidences from Agatti indicate that there were Buddhist settlements here in the sixth and seventh century and Islam was brought to the land in the eighth century. "We found that despite its remoteness and inaccessibility, the community had religious homogeneity and 100 per cent literacy," reveals Apte. "This struck us as unique, a Muslim society with 100 per cent literacy. All the women were literate and most working in the natural products post-harvest industry. There existed a Shariat law (Islamic law) but in combination with matrilineal traditions. Before finding the giant clams, we needed to build awareness among the community about conservation.

"I appointed a local team to assist me in the research and went to the madrasas (Islamic school), seeking their cooperation to create environment awareness among the community. We explained to them how the food chain worked and that the tuna catch would increase if we could conserve the bait-fish and find the giant clam associated with it.

"We told the people that conservation must be linked to development and cannot be separated from their social, economic and political contexts," informs Apte. Through the madrasas, the communities, the panchayats (village councils) and the administration were accessed. He elaborates, "We mounted audio-visual campaigns, involving 1,500 school students in lagoon clean up efforts, reef walks, and gave people issue-based environmental education study kits."

Concerned that the islanders would face a bleak future if their ecological heritage were ruined, young women like Haseena, who is a teacher, and Tajunnisa, became key community facilitators. "They went door to door to gather baseline data on natural resource use and the socio-economic status of households," says Apte. Through open forum community meetings and consultations, they won the unanimous approval of the conservative community, which now wholeheartedly supports the creation of the Agatti reserve. 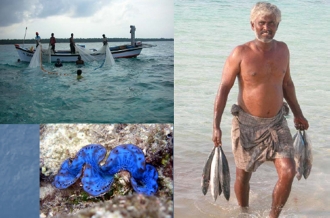 Currently, the project has eight facilitators, four of them women. The volunteers and project staff comprises entirely locals. As many as 95 people have been trained in giant clam and bait-fish research and in monitoring the local ecological systems. Two people were sent to the UK, Belgium and Australia for leadership training. A dozen people have been trained to mind the marine protected area around Agatti, some trained as divers others as eco-tourism managers. The Agatti reserve management committee has three government representatives, eight members from Agatti's eight wards and three wildlife conservation workers from the community.

"This is the area where the best catches are found and they know, if they do not conserve the area, their livelihood will be affected," says Apte, adding that, "the community's high literacy and complete dependency on natural resources helped communicate the message of resource conservation and management." And the effort is largely driven by women.

By bringing the benefits and the knowledge of science to their people through self help groups, Haseena and Tajunnisa have helped secure a long-term future of the resources on which their families depend. Their home, Agatti, has, now become a model in partnership between people and the authorities. Women's Feature Service