Our own Personal Law Board

The eagerness to take up their issues themselves has not automatically led to a smooth start for the All India Muslim Women's Personal Law Board. But clearly, there is now more discussion of the issues that interest them. And that is a significant step in itself. Puja Awasthi reports.
21 September 2006 -

In February last year, the almost unthinkable happened. Muslim women broke through their traditional purdah-covered mould and reached over the heads of self-appointed keepers of the faith to form a board to protect their rights. The push for this step came from the (rather belated) realisation that the All India Muslim Personal Law Board (AIMPLB) had done precious little for the status of India's Muslim women since it was formed in 1972.

Women had, in fact not even been consulted in issues of vital importance such as the draft for a model nikahnama or family planning. There was also, as Parveen Abidi, general secretary to the board and daughter of freedom fighter MN Abidi, points out, another very important reason why the board was needed. "The Maulanas always describe and implement the Shari'ah as per their interests. Muslim women are doubly disadvantaged as the Maulanas never come to the rescue of harassed, divorced or victimised women while the administration refuses to interfere, terming it a religious matter. For instance, think of the Board's appalling silence in the case of Gudiya." 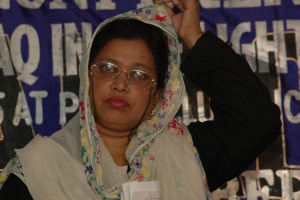 The board has a 26 point charter of aims and objectives and these include employment generation activities for women, marrying off destitute girls, spreading the teachings of Islam, ensuring equal rights for daughters in ancestral property, and the like. However due to financial and time constraints, the board, for now is focusing on resolving marital, inheritance and maintenance problems. Board President Shaista Ambar herself admits that since they receive funds from nowhere the other objectives will take a long time to materialise. Moreover one and a half year is too short a time to judge their achievements. They are still settling down. And as Ambar says, "Most of my time is spent arguing with the Maulanas on matters of no consequence".

The eagerness to take up their issues themselves, however, didn't automatically lead to a smooth start; before any work could be done, board members of the All India Muslim Khwateen's (Women) Personal Law Board (AIMWPLB) were busy ejecting each other from the newly constituted body. Much reshuffling and ejections later, the board has finally settled down into its present form of 13 executive committee members, 42 members and a 22-member advisory committee.

Shaista Ambar, as AIMWPLB president, has been the board's most visible and vocal face. The plain speaking Ambar says threats of physical violence have come her way frequently in the last year and a half, but she is not willing to be cowed. What could bring the board down, on the other hand, is the mistrust it engenders even among those who approach it. The board's first anniversary celebrations, for instance, turned into somewhat of a circus. Ambar was at the mike emphasising that the board was committed to making - and not breaking - families, and illustrated this with the case of the then-newly-divorced Anjum Ara, a woman from Ghazipur. "Ara and her husband's family want a compromise and the board is working towards it", Ambar said in self congratulation. Sitting among the audience was Ara's brother who was at his feet, stomping and shouting as Ambar was making the announcement. "She is lying, she is doing politics", he screamed before leaving the venue in a huff.

Incidents such as these, within the short period of its existence so far, have the clergy thrilled that the AIWMPLB will ultimately fade into inconsequence. Maulana Sajjad Nomani, senior AIMPLB member terms the AIWMPLB a 'joke'. Nomani also defends the AIMPLB, arguing that it is not the right forum for addressing women's rights, while maintaining that the board alone should have authority over personal laws. "It seems to have become a fashion to form personal law boards for propagating some cause. While everyone is free to form an organisation, no one is authorised to form personal law boards. To criticise the AIMPLB for ignoring women's rights is incorrect. It was formed for two specific purposes  to protect the Shari'ah and create awareness among Muslims to resolve family disputes in accordance with Shari'ah. The AIMPLB cannot go beyond that".

He also points out to the obvious political leanings of some of its members, a charge even the greatest of AIMWPLB supporters would find hard to deny. In Lucknow, the board functions out of the office of the Rashtriwadi Communist Party, of which Ambar is a long-time secretary. Often the boundaries between the board and the party are blurred when board members take to the streets to protest some issue. There is also something to be said about the board's love for publicity. Once the Dar-ul-Kazah, the Islamic court that the AIMWPLB holds to decide cases, was held in the Press Club of Lucknow.

The board's main focus has been the redressal of women's problems, which mainly centre around talaq, maintenance and inheritance. And although the 26-point charter of aims and objectives also includes extending financial aid to poor women and training women in income generation skills, these have remained only on paper for want of funds.

Maulana Khalid Rashid, another member of the AIMPLB, and among the most progressive faces of the clergy rejects the contention that a board for women was needed because of the failings of the original board. "The Shraiat permits daughters to inherit agricultural land but U.P. state government rules do not. One and a half years ago we wrote to the state government demanding changes in the rules. That still remains to be done", the Maulana points out as just one instance of the Board's gender friendly role.

Rashid also points out at the need for looking at the larger picture. "Islam is one of the most progressive religions as far as women's rights go. For instance the Shari'ah stipulates a marriage cannot be initiated till the woman's permission is sought, to bring up, educate and marry well a daughter is one of the surest routes to Jannat and a man cannot force his wife to do household chores. But there are lapses everywhere as happen among other communities and religions. The need is that women be educated so that they can understand their rights and come forth in larger numbers to participate in discussions about the same. If women are poorly represented in the AIMPLB, then it is just a reflection of the trend of women finding lesser representation at all levels be it the political or economic. We don't condone this, but that's a fact".

The 204 member AIMPLB has only 24 women. Begum Naseem Iqtedar Ali, the sole woman to find a place in the executive committee of the AIMPLB adds that the board has in fact shown greater consideration of women's issues over the years. "There are various schools of jurisprudence and all have to be consulted while drafting such a thing as a model nikahnama for instance. Do we hurry in its formation and risk having it rejected or do we finalise a draft carefully? Moreover when the AIMWPLB members reject it as ineffective, they fail to recognise that in a secular country nothing can be forced. The nikahhama for instance lists the duties and rights of both men and women and stipulates that representatives from both sides should be present should a dispute not be resolved by the concerned parties. This is by no means a patriarchal interpretation of the Shari'ah". Incidentally, the AIMWPLB too has completed work on what Shaista Ambar calls a "Shari'ah nikahnama", which will be released after Eid this year.

Ambar rejects the explanations offered by the AIMPLB members, and makes no apologies for the in-your-face activism of the new body, which she says is necessary. "We need to occupy prominent media space if we are to send out the message that we are serious about the issues we are addressing. It heckles the Maulanas that the AIMWPLB is taken as an important entity and my views put alongside theirs whenever a matter of importance is discussed, but this is something they will just have to live with." She goes on to explain how the board's constant hammering of issues such as the absurdity of fatwas has led to an open debate on the same. She is also frank about the need to politicise issues. "Within a democracy, political power is often the most potent means of getting your voice heard. Why should we hesitate from using it?" she shoots back.

The new board has evoked mixed responses; enlightened community opinion is centred around the need to take note of the larger issues that plague Muslim women, but college professor Saima Ahmad points out that the proliferation of boards only sends out the message that the community is divided. "We need to educate our women. Why can't we start discussing why only one percent of the total women graduates are Muslims? Why not a debate on the reticence to administer polio drops? Boards only talk, talk and talk. We are a community caught in a time wrap and need to make efforts to get out".

Whether the AIMWPLB will pave the path to that escape remains to be seen. But clearly, there is more discussion now of the issues that interest Muslim women, and that is a significant development in itself. A year and a half after the establishment of the body, Parveen Abidi has no regrets. "Establishing the AIMWPLB was a wise step", she maintains.