Ganjam has been a high-migration district from British times. For two decades, the bulk of its labour force has gone to Surat, but that is changing now, writes P Sainath.
15 August 2009 -

"This is the busiest 'labour-travel' railway station in Orissa," says R.C. Behera, smiling. He is Station Manager at Berhampur, Ganjam, from where about 7000 passengers travel out each day on average. Around 5500 of those are 'unreserved' travellers - overwhelmingly labourers migrating for work in Surat and Mumbai.

Most of those aboard the Ahmedabad-Puri Express are normally bound for Surat. There are at least 25,000 headed for that city each month. Which means that in 'normal' times, there could be three lakh passengers out of this station headed that way each year. And that's with only five trains weekly to Surat. Locals have long demanded a seven-day service.

That might not happen just now. The recession in the West has hit several textile units they work in as powerloom operators in Surat. It has also fractured the diamond industry there which employs a smaller percentage of Oriya workers. Large numbers have come back and the Ahmedabad-Puri Express empties itself at Berhampur, Ganjam's main station. The "Sethu" project of the NGO Aruna which works "to bridge migrants from Ganjam and their homes" finds that the "Surat shock" is having a big fallout. "There are always lots of people coming and going at any time," says Lokanath Misra of Aruna. "But the number at home at this point is way above normal. We estimate some 50,000 are back who might find it difficult to return to the old employment." 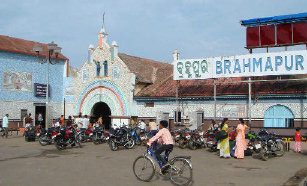 The Berhampur railway station (written here locally as Brahmapur) wears a deserted look on days when the Ahmedabad-Puri Expres does not run. More people take that train (till Surat) than any other at this station. (Picture by P Sainath).

The same project has surveyed Oriya workers in Surat and found "more than six lakhs of them living in 92 slums in that city. Of these, over four lakhs are from Ganjam." As elsewhere, one of the problems accompanying the migrants home is HIV Aids, something the NGO Aruna focuses on.

This been a high-migration district from British times, particularly after a great famine in the 1860s, and Ganjam's migrant workers can be found at countless towns within India. But for two decades, the bulk of its labour force has gone to Surat. "It worked for our people," laughs Simachal Goud in Kamagada village of Aska block. The village has about 500 households and an estimated 650 migrants. "In Surat, unlike if we went down south, no education is required. In Surat we can make Rs.250 a day." There is a tendency amongst many workers to slightly exaggerate their earnings in Gujarat. Not so much to impress us, says one local, as "to set their dowry rates higher. So Rs.250 could mean Rs.200." Yet, even the illiterate amongst them managed Rs.170-180 a day. "Where can we get anything like that in Ganjam?" they ask.

This worry now grips the district. How will it absorb tens of thousands of these workers if they give up on Surat? District Collector V Karthikeya Pandian, under whom Ganjam topped Orissa as the best performing district in the NREGS, recognises the seriousness of the problem. "Skilled labourers won't be easy to absorb," he says. Surely not in the NREGS, though that has embraced 1.5 lakh of the district's 5 lakh families. In the villages, they agree with the Collector. "Not more than 10 or 15 per cent of those coming back can return to agriculture," says Simachal Goud. "After years of working textiles or the gem industry for years, you simply cannot do that kind of work anymore."

The Collector hopes the upcoming Port expansion and Indo-Russian Titanium projects will help absorb many skilled workers. He however sees the mismatch in scale and numbers. The returning migrants are too many. He is hopeful, though, of increased investment in agriculture since the returnees have some money and do buy land.

The return of large groups has other effects, too. Group clashes over long dormant feuds has been one of these. A rise in some kinds of crime is another. Family disputes, alcoholism and other tensions are on the rise. And people have returned to a dismal job scenario. As The Hindu correspondent Shib Kumar Das points out: "these are still on a low burn, thanks to the elections which kept everybody employed for two months. With those over, worse might follow. "

How will the district absorb tens of thousands of the returning workers if they give up on Surat?

There might, of course, be new destinations. "You could find lots more of us going to other cities and towns in other states," says Achyutananda Gouda in Lathipada village. "Many already do. This trend will rise." He and his friends rattle off the names of at least 20 other cities outside of Gujarat that people from their village already go to. On Surat, Gouda says "It won't die out. People will still try their luck there, but it will decline." A few believe some recovery is possible if and when government steps in to bail out the export-linked units.

A surprise destination often discussed here is - Kerala. But why Kerala? "Because," says a few who have been there, "there are jobs there those people won't do. The minimum we'd get is Rs.150 a day. There the work would be for eight hours with a lunch recess unlike Surat's 12-hour shift without a break. You can also make the roughly the same amounts (i.e. Rs.170-200) because you will surely get two hours of overtime. There's no such thing in Surat. In Kerala, there are proper timings and a day off, the labour laws are strictly enforced (because the unions are strong). In Surat we are treated like dirt."

The money difference is fast shrinking, says Dukhi Shyam in Lathipada, who has operated looms in Surat for 14 years. "Now each of us handles six looms where earlier we managed four. That too is a way of cutting our wages."

Many 'returnees' do not like to see themselves as grounded at home base even if they suspect they are. Many speak of returning to Surat "in some months" and might well try their luck. Others are looking to newer venues. As one old cynic put it in Lathipada. "What is there to stay for? In this region you migrate when you're weaned off breast milk." And return, his neighbour chips in, "when the hair on your head, if you have any left, is grey."