What have the reserved constituencies voted for?

In the 2014 elections, the BJP won 66 out of 131 seats reserved for SC/ST candidates, which is the highest for any single party since 1991. Prabhu Mallikarjunan looks at the statistics and tries to decipher what this says for voting behaviour in these constituencies.
21 July 2014 -

With a view to lifting the socio-economic status of backward classes and to achieve inclusive growth, Scheduled Caste (SC) and Scheduled Tribes (ST), considered among the most oppressed classes in Indian society, are given a fair share of participation in the Lok Sabha through the provision of ‘reserved constituencies.’

A total of 131 seats (18.42 per cent) are reserved for representatives of Scheduled Castes (84) and Scheduled Tribes (47). These seats are reserved in proportion to the SC/ST population as a share of the total population of the State. As per the 2011 census, these sections comprised about 16.6 per cent and 8.6 per cent, respectively, of India's population.

For the first time in the 2014 parliamentary elections, the BJP won the largest number of seats in these constituencies -- 66 out of a total 131 seats. This is also the highest number of reserved constituency seats won by any single largest party ever, since 1991. The BJP retained almost 88 per cent of the seats it had won in 2009.

The BJP in UP and elsewhere 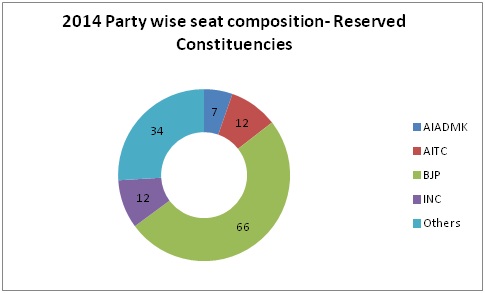 The BJP has made strides in 15 states in the reserved constituencies unlike earlier, where it had penetrated in not more than 11 states (1999, 2009). In Andhra Pradesh, it made an entry through its alliance partner TDP.

The party’s gains in the state of Maharashtra and Rajasthan among the ST community were also massive.

In Bihar, all the six reserved constituencies were captured by BJP and its alliance with the Lok Jan Shakti party, led by Ram Vilas Paswan. In 2009, the BJP had just one seat (Gaya) in the state. But the JDU which had four seats in 2009, could not win a single one this time. According to Jha, the alliance has consolidated the non-dominant caste votes and acted in favour of the BJP.

In Karnataka, the BJP retained both the Bellary and Bijapur constituencies that it had won in 2009.

However, its most striking feat has been in Uttar Pradesh, which incidentally has the highest scheduled caste population and where the regional parties like the Bahujan Samajwadi Party (BSP) and Samajwadi Party (SP) have traditionally had a strong following. Notwithstanding that, the BJP has swept all the 17 reserved constituencies in UP this time.

The SP which had 10 seats in 2009 could not retain a single one. What explains the landslide in favour of BJP among the electorate here?

In June 2014, a 15-year-old girl in Etawah committed suicide following alleged police inaction against a group of youth who tried to molest her sister and attacked her father. In July last year, a 20-year-old girl was allegedly gang raped and set afire by a youth and his associates in the same district. Reports of crimes have been reported from across the state, including the home turf of Chief Minister Akhilesh Yadav, with unfailing regularity in the months between.

The failure of the state government in controlling the incidence of crime was one of the prime reasons for voters to reject the Samajwadi Party says professor R R Jha, Dean of Social Science at Banaras Hindu University.

“There was and is absolute misgovernance. If safety could not be ensured even in the Chief Minister’s turf, it showed the extent to which the state government failed, and this in turn changed the voter’s perceptions. Perhaps, if the crime rates were controlled and safety was ensured, the SP could have been in a better position in the 16th Lok Sabha,” says Prof Jha.

In Etawah, Premdas Kateriya of the SP lost to the BJP candidate by a margin of 1.7 lakh votes.

According to the National Crime Records Bureau (NCRB) report released in June this year, in 2013, the incidence of crimes against members of the SC/ST population in UP constituted 18 percent of the crimes against these communities in the country. Also, one in every third murder committed against Scheduled Caste individuals across India happens to be from UP.

But while inability to prevent violence against the lower classes may have been a part of the cause of the SP’s downfall, in these reserved constituencies as in general, the thrust on performance and security held sway this time around. Issues like agricultural loan availability, electricity for agriculture, better law and order and better policing took priority.

In a survey conducted by Bangalore-based NGO Daksh in association with ADR, in the reserved constituencies of UP, the erstwhile MPs of Congress, SP and BJP were rated between 3 and 4 on a scale of 1-10 on their overall performance.  The MPs fared very poorly in terms of ensuring security to women and handling anti-terrorism issues.

In Hardoi constituency, for example, the SP candidate and erstwhile MP was a post graduate with no criminal cases. Yet, she lost to the BJP and stood third in the race. She was rated the lowest (1.5) in terms of her accessibility.

Daksh rating of 2009 MPs in reserved constituencies in Uttar Pradesh

However, the BJP MPs were rated no better. On a scale of 1-10, most of them were rated below average. Yet, led by the Modi wave and the strong anti-incumbency factor, the party took its tally from two to 17 in UP and managed to retain 23 out of the 26 reserved constituency seats that it held across the country in 2009.

The fall of Congress

The Congress, which once held 61 seats of these reserved constituencies lost ground over the years, and in this election, the party lost 70 percent of seats which it had won in 2009.  This underscores, yet again, the increasing thrust on performance and satisfaction of expectations. The poor performance of the erstwhile Congress MPs in these constituencies is largely behind the loss of ground for the party.

This is again borne out by the results of the Daksh survey, where the Congress MPs of the 15th Lok Sabha were found to be rated ‘average to poor’ in their overall performance. On a scale of 1-10 on the issues concerning job opportunities, better roads, hospitals, schools, agricultural loans, security of women, tackling of corruption and others, the MPs scored below 5 in many constituencies.

Dr Sandeep Shastry, psephologist, is of the opinion that winning or losing in a reserved constituency does not mean direct support from the Dalit and SC/ST communities. The party candidate may belong to one of these groups, but there are other dominant upper caste people who decide the voting patterns.

“This is purely an aspiration vote. The anti-incumbency factor and the poor performance of the ruling party at the state level, led to the victory of BJP, particularly in states like UP where the party had highly polarised the non-Yadav and upper caste votes,” he said.

Prof. Jha, too, feels that if the BJP has to retain seats in these constituencies, the government has to take efforts to improve the livelihood of Dalits and backward caste voters over the next five years.  “Though caste plays a role in these constituencies, this time, the voters have voted based on the charisma of a single person who was projected as a change maker. It would now be best for the government to address the issues raised and listen to the people of the region,’ he said.

[All election data sourced from www.indiavotes.com]