ECONOMY / THE PATH TO DEVELOPMENT

Why UPA’s folly could be Modi’s too

With Narendra Modi at the helm, the push towards market-driven development looks likely to be continued, leading to an eventual defeat of real expectations from the voter, says Pradeep Baisakh as he analyses the causes behind the UPA debacle.

Elections 2014 in India were phenomenal in many ways. For one thing, it saw, for the first time in thirty years, a single party winning such an overwhelming majority. The last time this happened was in 1984, when the Congress party secured a thumping win under the leadership of Rajiv Gandhi.

This time, the people voted overwhelmingly for the National Democratic Alliance (NDA) coalition, with the BJP (Bharatiya Janata Party) being its largest constituent. The NDA got 336 seats out of the 543 while the BJP got 282, its highest individual tally till date.

The second important outcome was the historic drubbing of the Indian National Congress (INC). Voters gave the party just 44 seats and the UPA alliance led by it only 59 seats in the Lok Sabha. In the 2009 parliamentary elections, the Congress had 206 seats and the UPA 261 seats.

For the Modi government to hold on to the huge advantage it has secured, it must succeed in governance, for which it would be crucial to grasp the reasons behind the fall of the former regime and learn from it. However, the approach of the new government does not seem to hint at that. 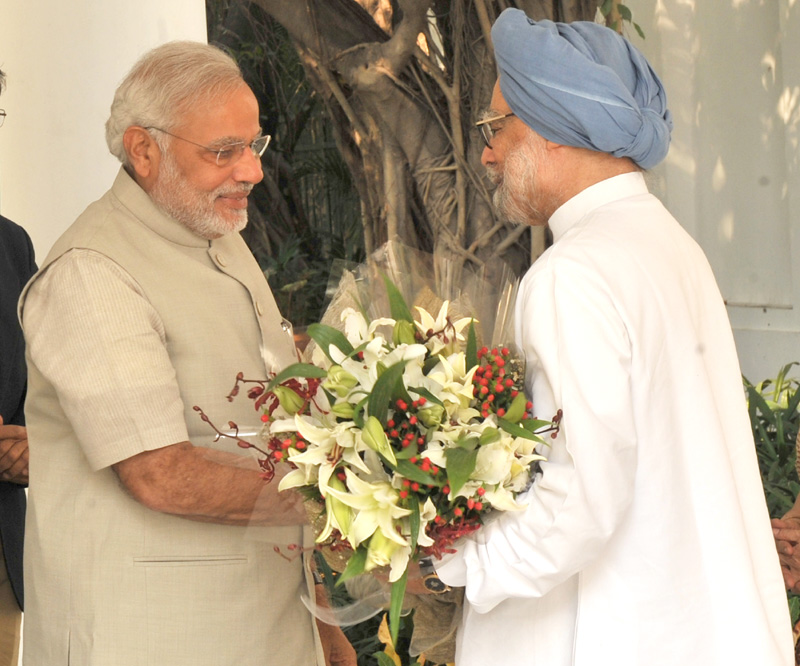 If we were to probe the reasons behind the fatal performance of the Congress party in 2014, we would broadly identify three reasons for it: insurmountable price rise; a plethora of scams, and thirdly, fast rising inequality. There could be other reasons, too, but those would be beyond the scope of discussion in this piece.

Let us probe the three reasons mentioned in more detail. Going back a little, in 1998, the BJP faced an electoral debacle in three states, despite the national wave being in favour of the party, for a single reason: Onion prices had hit an unmanageable high of Rupees 40 per kg, rising six-fold over the previous year! Prices of other essential commodities had also risen. As a result, the BJP lost Delhi and Rajasthan to the Congress and performed poorly in Madhya Pradesh where the Congress retained power though the BJP-led NDA government was voted to power at the centre in same year.

Fast forward to 2014 and for the UPA too, the inflationary pressure of food and other essential commodities proved to be a big blow. Despite repeated assurances from the economist prime minister Manmohan Singh, inflation refused to decline. In April 2014, food prices increased by 9.66 per cent from a year earlier. In fact, the general trend of price rise has been felt for years together now, with an overall impact on the purchasing power of the people.

The health sector, too, has become unaffordable. During my visits to Balangir, Kalahandi, Koraput - some of the poorest districts of Odisha, and elsewhere, I have witnessed that if a member of a poor family, or one bordering on the threshold of poverty, suffers a major ailment, the family is forced to sell out its land and other family assets to fund the treatment. While the ailing person may or may not be cured, the family is often left penniless after the treatment and deep in debt.

Added to the bitter inflation pill, was the exposure of the multi-billion dollar scams in which the Manmohan government was embroiled. These included the 2G scam, the Coalgate scam, and the Commonwealth Games scam, to name just a few.

In addition to inflation and big ticket corruption, the third big factor one needs to consider is the bent of economic policy followed over the last decade. The neo-liberal economic policies introduced in the early 1990s by the Narasimha Rao-Manmohan Singh team naturally appealed to the UPA, but the UPA-I, though led by Singh, pursued similar policies with a check, as the left parties formed its coalition partners.

The strength of the UPA-I lay in effecting several welfare legislations such as the employment guarantee law (the Mahatma Gandhi National Rural Employment Guarantee Act, in short MGNREGA) the Right to Education Act, forest rights law and very importantly, the Right to Information law. All of these favoured the marginalised sections of society and also, the people in general.

The UPA-II bounced back to power with greater numbers than in the first term, which is attributed to the success of primarily the MGNREGA by many political analysts. However, UPA II, where left parties were not part of the government, got a free hand to pursue the policies of neo-liberalism except over the last two years, which is termed a period of ‘policy paralysis’.

Aggressive industrialisation policies marked massive subsidy to corporate organisations and free doles of natural resources like mineral, water and land to both MNCs and Indian bigwigs. Revenue foregone in the form of corporate income tax, excise and customs duty from 2005-06 to 2012-13 amounted to $523 billion or 31 lakh crore rupees.

The market driven economy led to the trickle-up theory where newly created wealth poured into the hands of the elite and inequality went up visibly. 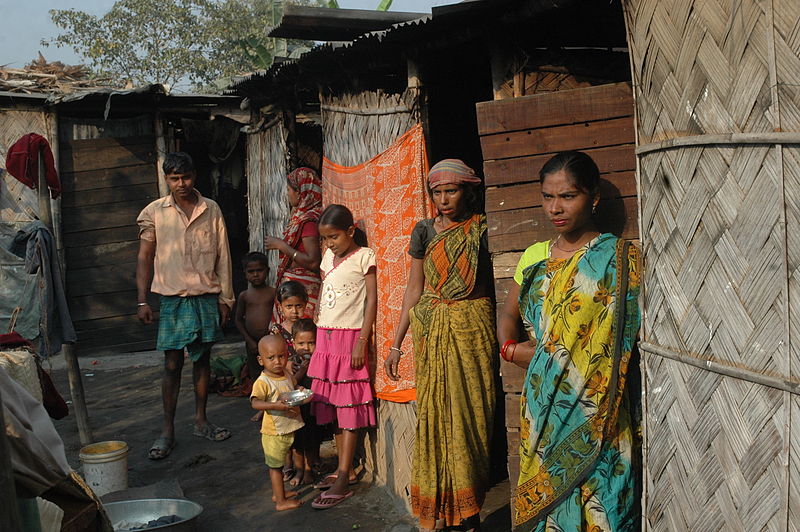 With market-driven economic policies, inequality in India has risen sharply
leading to expansion of slums and growth in numbers of the urban poor.
(Illustrative picture, courtesy: Pallabjyoti Kalita/Wikimedia)

Erroneous parameters chosen by the government to estimate poverty often obfuscate the real picture of poverty in the country. The government estimate of poverty stood at 21.9 percent in 2011-12, down from 45.3 in 1993-94. However, the Arjun Sengupta committee report on the unorganised sector, 2007 found that 77 per cent of people live below an income of 20 rupees a day. The N C Saxena Committee 2009 suggested that the percentage of people below poverty line should be revised to 50 percent.

It is not surprising, therefore, that over the same period, the country witnessed massive unrest in the form of expansion of Maoist presence in backward regions of the country, open movements by people against forced industrialisation, environmental protests and so on.

Why the future is unlikely to be different

Even as one holds the Manmohan Singh government’s policies responsible for such misguided policies, it must be remembered that the Vajpayee-led NDA pursued liberalisation with a vigour no less.

More FDI and FIIs for increasing investment, tax concessions for industrial growth, deregulation of prices of several commodities including petroleum products, reduction of state spending on welfare schemes to keep a check on fiscal deficit were some of the policies carried forward.

The outcome was the same, however. All these economic measures created resentment among the people. The consequence was visible in the 2004 general elections when, despite projections to the contrary, the BJP-led NDA coalition crumbled to 181 seats from a tally of 303 in 1999.

It must also be notd that over the last twenty five years, whether it has been a BJP-led or a Congress-led government at the Centre, the agriculture sector has been neglected grossly, leading to mass exodus of small and marginal farmers from the farm sector, and even large scale farm suicides. The latest National Crime Records Bureau (NCRB) report suggests that there have been about 2.7 lakh farm suicides since 1995.

About 15 million farmers have left the sector since 1991 and over 7.7 million since 2001, shows the Census data of 2011. As farmers migrated to cities seeking work in the unprotected, unorganised sectors, slums in the cities witnessed a sharp expansion.

Narendra Modi, the great strategist, may have taken full advantage of the anti-incumbency factor and the absence of any alternative to the NDA combination in the recently concluded general elections, but his thrust has been the same.

During the campaign, Modi highlighted his Gujarat development model and indicated that he would replicate it across the country to bring about change in the lives of people. Most of the Indian media continued to exaggerate his achievements without discussing the root cause of price rise and inequality.

The Gujarat model is primarily a market-driven economy, though even by those standards it is not the best, given that Maharastra, Delhi and Tamil Nadu attract more FDI than the state. In terms of the Human Development Index, it stands at 9 among 20 states. Welfare economist Jean Dreze elaborates on this in his columns in The Hindu, The Gujarat Muddle and The Gujarat Middle.

Modi’s slogans like ‘Less Government and More Governance’ or ‘Government has no business in businesses’ fit in well with the neo-liberal economic model. Just after assuming office, his finance minister declared that his priority would be bringing in more foreign investment.

While listing out his ten priorities for the first 100 days, Modi included “removing hurdles for economic growth” at the top. “Pushing reforms in infrastructure focusing on attracting investment” featured among other major priorities.

While he does place emphasis on education and health sectors, it remains to be seen how these sectors are supported: through increased state funding, or through promotion of the public-private partnership (PPP) model which could push up the education and health expenditures of families to even higher levels than at present.

The rhetoric and steps taken so far strongly suggest that Modi is unlikely to reverse Manmohanomics. A proper analysis of a neo-liberal economy and its impact in India and other countries would clearly spell out what it means for the masses who matter. If Modi does not realise this, I will not be surprised if he is also shown the way out by Indian voters!

The author is an independent journalist based in New Delhi. He was a media fellow of National Foundation for India (NFI) in 2012.