Blank Noise, begun as Jasmeen Patheja's personal reaction to street sexual harassment, has grown to record women's experiences in creative ways. The latest of these is a clothes collection effort to tackle the misconception that women's attire invites harassment. Vasudha V reports.
22 December 2005 -

Jasmeen Patheja, a fine arts graduate from the Srishti School of Art and Design Technology, Bangalore, is collecting old clothes from across the country for her project. Not just any clothes. Clothes that carry with them tales of harassment. Named Blank Noise, Patheja's is a participatory project that addresses the issue of sexual harassment on the streets, or "eve teasing". "It started off as a project when I was in my final year. The project was conceived as a personal reaction to street sexual harassment," the artist says.

The latest stage of this project is "Did you ask for it?". Patheja has asked people to send her clothes that they were wearing when they were sexually harassed or threatened on the streets. "Since the common perception is that women 'ask for it on account of the clothing they wear', I want to confront this justification for sexual offence. The clothes will take the form of testimonies that have been witness to an incident. When clothes from different parts of the world are put together, the question can be asked again. This is an ongoing project and I am still waiting for clothes to reach me," she says.

As a girl grows up, her introduction to the world and its ways are not gentle, but are often rude instead. She realises that her body is changing not when she outgrows the previous summer's frocks, but when someone gropes her in a crowded bus. This is at an age when she does not know what lust is or what pleasure a pervert gets pawing her as she walks by (which no woman will probably understand). Sexual harassment pervades the roads, disguised as "eve teasing". And Patheja is out to confront it, head on. Patheja, who is from Kolkata, moved to Bangalore when she was 19. "The threat of being sexually harassed every time I was out of home and then labelling this invasion of my privacy with an innocuous term 'eve teasing* made me realise that this is an offence that has often been ignored or trivialised. Being in a new city made me feel more vulnerable to the situation where there was no 'home' to run back to," she recalls.

Picture: An auto-rickshaw hosts an opinion poll conducted by the Blank Noise group in Bangalore. It led to discussions and debate, treating "eve-teasing" as an issue.

While it is bad enough that sexual harassment gets labeled the trivial pastime of roadside Romeos, the reaction that Patheja got from her peers was worse. A casual "yes, it happens everyday" or "it's normal". Or more horrifyingly, complete denial: "How come this happens only to you?"

Nevertheless, realising that it was not just her problem, Patheja asked a group of over 60 girls from Srishti to make a mind map with the phrase "public space". "In three minutes, words such as 'groping', 'fear', 'Vulnerable', 'weak', 'staring' and 'feeling sick' appeared. Then I proposed the project" she says. While 24 of the group members responded positively, the others found the issue "no big deal". In most situations, it is a form of 'wooing', but when does this wooing become offensive and aggressive? When is it not accepted? Who is drawing the line? Do you expect it, therefore accept it?" These are some of the questions Patheja fires back.

While it is bad enough that sexual harassment gets labeled the trivial pastime of roadside Romeos, the reaction that Patheja got from her peers was worse. A casual "yes, it happens everyday" or "it's normal". Or more horrifyingly, complete denial: "How come this happens only to you?"

•  Are girl students safe?
•  Sexual harassment at work
•  Rape and the urban environment
•  More than the letter of the law
•  The SC's Visakha guidelines
•  blanknoiseproject.blogspot.com

Initial stage of the project

The first phase of the Blank Noise project dealt with victimhood. Patheja began with a series of workshops that explored the public and private identities of nine women. This collective participatory experience evolved into an installation that included video, sound and photographs. With this installation I tried to address the victim, the perpetrator and the silent spectator," Patheja explains.

After graduating from Srishti the youngster decided to take the project to the next level, namely that of public confrontation. "With a grant from Sarai and support from Srishti, I envisioned Blank Noise as a participatory, public art project where I could take the issue to the streets while including a wider base of participants," she says. In its current stage, the project has a diverse set of participants that includes college students, members of theatre groups and the general public. "We are currently working on public interventions that are performative in nature. This stage of the project has us disseminating and questioning the law  Section 354 of the Indian Penal Code (IPC), which deals with outraging the 'modesty' of a woman," Patheja says.

Patheja is also tapping technology to her advantage. Another ongoing experiment deals with the reversal of power where the perpetrator is shot on film with a camera and the pictures are posted on a blog. The blog has also brought together a number of people from across the world, who have prposed to carry out the project in their cities. 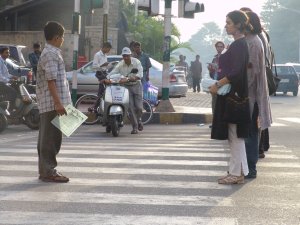 A demonstration on Bangalore streets by Jasmeen Patheja and her group; the women stood at traffic signals wearing letters on them that spelt out "Y R U LOOKIN AT ME".

Though activism seems to have come to Patheja as a natural reaction, she chooses not to get labeled an activist, feminist or public artist "I feel that as an artist, one has to play all these roles. I would also like to emphasise that none of these roles can be played in isolation. There are many kinds of artists, and each one of us has something to say, to express. The form and space in which things are addressed leads to its impact," she reasons.

Also a student of "communication for social change", Patheja stresses that art does indeed play a role in social change. She says, "Artists such as the Guerilla Girls, Peggy Diggs and Gran Fury have been responsible in bringing about a change in societal attitudes through their art. Their art appeared on billboards, posters, milk cartons, wherever it was appropriate. Peggy Diggs was concerned about domestic violence. She printed her message on milk cartons and since all women bought milk for their families, it reached out to them. Gran Fury collaborated with activist groups and created billboards, confronting public with the social stigma attached to AIDS."

In the future, Patheja says, Blank Noise will be working with more groups, people who function as key authority figures in public spaces. "The idea is not only to get an 'angry' response but to tackle the issue from different dimensions. Who is the victim, who is the spectator, who is the perpetrator?" she asks. (Quest Features and Footage)

Vasudha V is an independent journalist associated with Quest Features and Footage, Kerala.