Biosafety: Who is liable for damages?

The BRAI Bill 2013 purports to uphold the Cartagena Protocol on Biosafety but completely overlooks a critical sub-protocol that provides for liability and redress in case of damage to biodiversity. Shalini Bhutani explains why that defeats the very purpose of the Bill.
22 October 2013 -

The Biotechnology Regulatory Authority of India (BRAI) Bill, 2013 was introduced in the Lok Sabha in April this year, and has since been referred to the Parliamentary Committee on Science & Technology, Environment & Forests. The Committee will examine the Bill before submitting its report to the House.

The opening lines of the BRAI Bill make mention of the international treaty it attempts to implement, that is the Convention on Biological Diversity (CBD) and its sub-treaty, the Cartagena Protocol on Biosafety (CPB). However it omits mention of CPB's latest and perhaps most critical sub-protocol - the Nagoya-Kuala Lumpur Supplementary Protocol on Liability and Redress (N-KL SP), the text of which was adopted at CBD meetings at Nagoya, Japan in October 2010. The Protocol makes it mandatory for countries to enact domestic rules and procedures providing for liability and redress for damage to biological diversity resulting from transboundary movements of living modified organisms (LMOs).

The Supplementary Protocol is a global acknowledgement that LMOs can cause damage. But it is yet to come into force. It awaits 40 ratifications, while nearly a score of countries (including the European Union) have ratified it thus far. The key LMO exporting countries - Argentina, Australia, Canada and USA, are neither parties to the Cartagena Protocol nor the Supplementary Protocol. Yet, as per the N-KL SP, domestic law implementing it shall also apply to damage resulting from cross border movements of LMOs from non-Parties (such as USA).

The Government of India signed the Supplementary Protocol on 10 October 2011; this decision is awaiting Cabinet approval to ratify the same to make India a member country. But our law-makers need to already begin to lay the foundations of an international regime on civil liability with respect to LMOs in line with the Supplementary Protocol. The building blocks will lie in the blueprint of the domestic level law.

Why is the Supplementary Protocol so important?

The purpose of the BRAI Bill is not only to set up a central independent statutory authority, but as expressly stated in its opening paragraphs, to also strengthen the implementation of the CBD and Cartagena Protocol. The Strategic Plan for the Cartagena Protocol for the year 2011-2020 prescribes that member countries such as India must have in place legal and administrative frameworks for biosafety by 2020. As current chair of the CBD processes uptil 2014, India ought to take a lead in this matter.

In the context of biosafety, liability and redress (L+R) as in the Supplementary Protocol (SP) will only be triggered by an attribution of responsibility for damage to biodiversity, taking into account risks to human health. "Damage," according to the SP, means an adverse effect on the conservation and sustainable use of biological diversity. The SP requires this damage to be both 'measurable' and 'significant'. The 'severity threshold' for damage has to be established by the domestic biosafety authority to be able to make a case for L+R. However, there are no provisions for reparation of damage to biodiversity in the BRAI Bill.

The justification given by the Government for the new law is that it would update the current biotechnology regulatory regime. Ironically, Rule 15 of the existing LMO Rules of 1989 issued under the Environment Protection Act (EPA), 1986 already provide that in cases where immediate interventions are required in order to prevent any damage to the environment, nature or health, the District Level Committee or State Biotechnology Coordination Committee may take necessary steps without issuing any orders or notice. It is also stated therein that the expenses incurred for this purpose will be repayable by the person responsible for such damage.

India has also had limited experience with the Public Liability Insurance Act, 1991, which is meant to provide for victims of an accident which occurs as a result of handling any hazardous substance. The Act applies to all owners associated with the production or handling of any hazardous chemicals. This idea, however, has not been extended to the use and handling of LMOs. The Global Industry Coalition (GIC) does not want new mandatory financial guarantees to be imposed on LMO operators under legislation on biosafety. But the international Protocol gives good reason to governments for legislating for the 'polluter pays principle. at the national level. 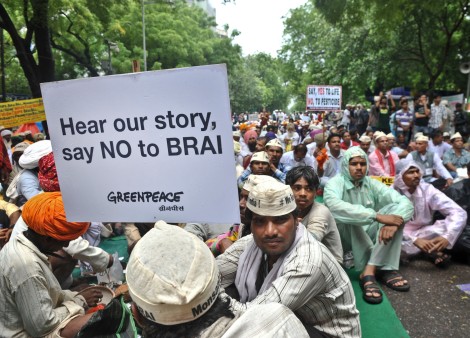 Farmers and citizens protest against the BRAI Bill in Delhi. Courtesy: Karan Vaid/Greenpeace.

The BRAI Bill does contain a specific chapter on 'offences and penalties'. It lays down that where an offence under the Bill has been committed, 'every person directly in charge of and responsible to' the organisation shall be held accountable. But in all cases, (whether an offence is committed by companies, societies, universities or government departments) it allows the accused to be let off if he proves that the offence was committed without his knowledge or that he has exercised all due diligence to prevent the commission of such offence [Chapter XII].

The very nature of risk from either illegal field trials or unapproved shipments of LMOs, i.e. potential to cause irreversible damage to human and ecological health, warrants a much more strict standard of responsibility. Else it defeats the very purpose of the Bill. If indeed the new law is to secure biosafety, it is essential for the Bill to take forward the civil liability option that the global Protocol provides.

Many state civil liability systems do not have laws and procedures in place to specifically address claims related to biological diversity. Yet, even though the SP talks of the 'restoration of biological diversity', monies collected from fines might not be able to make up for or reverse the genetic contamination of biological resources. However, it does allow countries like India that are taking an administrative approach to biosafety to impose strict liability for damage. This element has been completely overlooked in the BRAI Bill.

Express mention of the SP in the Bill itself would perhaps have sent out a much stronger message on responsible science and technology. It would also signify the government's serious intent to implement it. Strict liability is one of the elements to consider in exercising domestic civil liability options for LMOs as the Protocol advocates. But the Bill in its 88 sections does not adequately provide for either such liability or redress.

In August 2012, the report from an agriculture-related Parliamentary Standing Committee (PSC) took due notice of the matter. Paragraph 4.23 of the report on biotechnology in agriculture clearly stated that "(a)s a Party to the Supplementary Protocol, a special legislation in the field of liability and redress for damage resulting from LMOs would need to be enacted to meet the obligations under the Supplementary Protocol as the EPA 1986 and Rules 1989 and the proposed BRAI Bill do not address the concept of (i) damage and sufficient likelihood of damage from LMOs and response measures including financial security to take preventive measures."

The PSC Report was clearly considered by the Supreme Court of India in a pending public interest petition before it, namely that of Aruna Rodrigues & Others versus Union of India & others, [Writ Petition (Civil) No. 260 of 2005]. A Technical Expert Committee (TEC) of the Supreme Court has been able to recommend that there should be a moratorium on transgenic crops for ten years, and a ban on all GM crops of which India is a centre of diversity.

In response, the counsel for the respondents brought it to the notice of the Court that the Government of India has prepared a BRAI Bill, 2013 but the same is still wanting on the biosafety front. In attempting to 'regulate' the modern biotechnology industry, the proposed Bill ought not to open the floodgate of approvals for commercial application of GM products sans an adequate domestic liability and redress regime.

The BRAI Bill clearly needs to be redrafted. Mere window dressing the text with words such as safe and responsible use of biotechnology is not enough. Permitting operators to safely use LMOs is very different from restricting use to ensure safety.

Shalini Bhutani works on law and policy issues around agriculture.