Mumbai fights the towers that trouble

For some reason, cities have not followed the lead of Jaipur and more significantly, Mumbai in questioning the proliferation of cell towers, which are a wide-spread source of radiation. Indeed, in Mumbai itself, it is all the more surprising that a sustained city-wide campaign has been mounted by just two residents of Malabar Hill, which would probably rank as the precinct with the richest Indians in the country, and correspondingly low turnout at the voting booth in elections.

The prominent builder-politician Mangal Prabhat Lodha, also a resident, has written to the Minister of State for Telecom Milind Deora about these towers. It is by no means coincidental that Deora also hails from this neighbourhood. Another hill, also peopled by the rich and Bollywood, is Pali in Bandra, where some residents have shifted out of their bedrooms because they are disturbed by radiation when asleep; others do not permit their children to ever step out into their balconies for this reason.

Thanks to activists Juhi Chawla and her fellow Malabar Hill resident Prakash Munshi, one locality after another in Mumbai, gradually extending to the suburbs, is becoming aware of this potential menace to health and life itself. Under such pressure, the Brihanmumbai Municipal Corporation (BMC), after several false starts, has just issued a revised policy, but this falls short of citizens' expectations.

Under the BMC policy, seven out of every ten residents of a cooperative society must agree whenever the erection of a new tower on top of a building is approved or an older one is regularized. The Department of Telecommunications (DoT) had issued a policy on 1 August, which specifies that state governments and municipal bodies should obtain a NOC from housing societies each time permission is renewed for a tower at a site, and thus endorses regular monitoring. Municipal Commissioner Sitaram Kunte stated that because of the fact that the DoT revises its guidelines frequently, the BMC went ahead with the current draft. But he promised that changes would be incorporated subsequently. According to a survey conducted by the BMC, over 3000 out of 4776 towers in the city are illegal; Malabar Hill has 333 unauthorised installations and Bandra 300.

The new policy doesn't require cell tower companies to obtain a no objection certificate (NOC) from the residents of the building every year; instead a one-time clearance will do. This is a welcome change. However, the policy does not take into account the heightened awareness from citizens as time passes and the growing body of evidence about the hazards of such towers.

Other objections raised by citizens do not find their way into the BMC policy either. Residents had demanded that only two antennae should be permitted on a building, as against two mobile towers, which can have several antennae. Citizens have also asked to be included in monitoring committees. The DoT's Telecom Enforcement Resource and Monitoring (TERM) cell in Mumbai is hopelessly understaffed and under-equipped. It was set up at a time when there was virtually no awareness of the potential dangers of people contracting illnesses, including forms of cancer, due to the radiation issued by these towers.

Most building societies had fallen for the bait then - the fee of around Rs 5 lakh a year that telecom companies pay per tower. However, the cell is now deluged by requests to have housing societies measured for radiation at various floors. 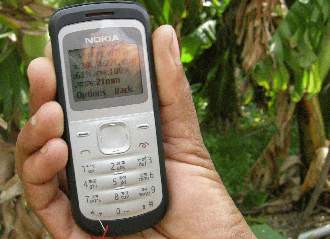 There may also be an entirely different environmental threat - climate change, no less - from the indiscriminate use of cell phones. A new study suggests that an iPhone uses more energy than a refrigerator, if you include its wireless connections, data usage, and battery charges.

It has just been revealed that the DoT's guidelines to state governments require all government agencies to first consult their respective TERM cell for approval before removing or shifting of towers over radiation or other fears. In other words, citizen activists, with or without assistance from state agencies or civic bodies, cannot take action without first approaching the TERM cell. This is a regressive move and is a recipe for inaction at best, and a reversal of precautionary steps at worst. All environmentalists believe that public participation . in this case, participation of the residents most affected . should have a say in the safety and preservation of their surroundings. This is why major transport and other projects are required to hold public hearings before being given the go-ahead.

Citizens have also demanded that the permission of residents of the top floor . who are most vulnerable to radiation . should be compulsorily sought, as well as the removal or regulation of towers which have sprouted on flyovers and lamp posts throughout the city, which is also true of the country as a whole. As Prakash Munshi alleges, "Such a revised policy by the BMC cannot be termed 'stringent' as they are going soft on the numerous towers that are already in existence."

Like many areas of new science, such as genetically modified crops or even nuclear power, it is difficult to draw a clear cause-and-effect relationship between cell tower radiation and people's health. Situations obviously vary, depending on several factors including the location of the building. Mumbai is probably the city most at risk because it has the highest density of high-rises in the country. What is more, every person has a different metabolism, which in turn affects how he or she reacts to the presence of a potential hazard.

Cell phone users obviously expose themselves to even greater risks, but they do so of their own accord, rather like smokers. It took half a century of persistent public pressure in the West to bring cigarette manufacturers to book, and the saga is by no means over in developing countries. The World Health Organisation estimates that 100 million were killed by tobacco in the 20th century, more than the two World Wars combined. People living below and near cell towers, on the other hand, are mostly exposed to a risk not of their own choosing. In all such risks, campaigners endorse the precautionary principle, which enjoins that public authorities regulate the presence of any potential risk to health in the absence of any cast-iron proof. To be safe, rather than sorry.

Mumbai's citizens also have a bone to pick with the DoT's guidelines on cell tower radiation. The latter takes pride in announcing that "India has adopted strict limits for radiation from base tower radiation (BTR) which is one-tenth of the international norms".

However, Mumbai's foremost authority on this subject, Prof Girish Kumar of IIT says "India has adopted 1/10th of ICNIRP [International Commission on Non-Ionizing Radiation Protection, a publicly funded body of independent scientific experts] guidelines, which works out to be 470 milliwatts/sq.m for GSM900 and 920 milliwatts/sq.m for GSM1800 [GSM or Global System for Mobile Communications, is a standard set developed by the Institute to describe protocols for second generation (2G) digital cellular networks used by mobile phones]. The most stringent norm in the world is adopted by Austria, which is 1.0 milliwatt/sq.m."

Munshi adds, "What they fail to tell citizens is that 95 per cent of the readings were already below the revised norm (10 per cent of original) and so the objective of reducing radiation levels and health hazards were not achieved at the ground level. This was an eye wash." He believes that the DoT should have divulged the highest reading of the 95 per cent and given a chart of readings for each decile in the manner below:

Munshi also alleges that the Secretary of DoT has admitted that there was no scientific basis for fixing this limit, incredible as it may sound. "What was the basis in fixing the revised norm to 10 per cent of the original and not 25 per cent or 5 per cent?" he demands to know.

Another important clause which the BMC has missed relates to educational institutions and hospitals. The DoT policy prescribes a ban on installation of mobile tower antennae on top of and within 100 metres of educational institutions (nurseries, schools and colleges), hospitals, nursing homes, old peoples' homes, hostels and orphanages. The antennae should not be directed / positioned towards such buildings. In February 2013, the Supreme Court began hearings on the Rajasthan High Court's ruling that cell towers should be removed from the roofs of schools, hospitals, jails and heritage buildings on a case filed by telecom-industry lobbies.

The real and present danger

Meanwhile, some of the latest findings on the hazards posed by use of cell phones come from Israel. Researchers at Tel Aviv University have found indicators of a major risk of cancer in the saliva of people who were heavy users of cell phones. Since cell phones are placed close to the salivary glands when in use, the scientists decided to examine the saliva of users to look for clues in the relationship between these phones and cancer.

The study examined men who used their cell phones for at least eight hours a month, although most cell phone users speak for much longer, as much as 30 to 40 hours a month, according to researcher Dr. Yaniv Hamzany of Tel Aviv University's Sackler Faculty of Medicine. Their saliva was compared to people who didn't use cell phones at all, or only used them to send text messages. The scientists discovered that the saliva of those who were heavy users showed high amounts of oxidative stress. Oxidative stress produces free radicals which damage all parts of cells including DNA, and is an important risk factor for cancer.

"This suggests that there is considerable oxidative stress on the tissue and glands which are close to the cell phone when in use," Dr Hamzany says. "The damage caused by oxidative stress is linked to cellular and genetic mutations which cause the development of tumors."

The International Agency for Research on Cancer issued a statement in 2011 that said cell phones may cause cancer in humans and currently classify them as carcinogenic category 2B . potentially carcinogenic to humans. They based their findings on studies which found that using a cell phone for 10 years doubles the risk of developing a glioma, the same type of cancerous tumour that killed US Senator Ted Kennedy.