Vidarbha distress and the end of innocence

Ten months after his father ended his life, Madhav toils from 6 am to 8 pm to herd the cattle of a big farmer for a paltry Rs 20 a day. Education? Forget it. In village after Vidarbha village where farmers have committed suicide, children have eventually dropped out of schools to take up the plough and work like beasts of burden, reports Jaideep Hardikar.
17 November 2005 -

, Vidarbha - When cotton farmer Digambar Agose, 55, swallowed pesticide in Malvagad village near Mahagaon town in Yavatmal on January 18, 2005, his 12-year-old son Madhav became a debtor by inheritance. Today, ten months after his father committed suicide, Madhav toils from 6 am to 8 pm to herd the cattle of a big farmer for a paltry Rs 20 a day. Education? Forget it. He has to help his mother Rukmabai feed the family. Then, he has to tend to his three younger siblings. Cut in to Padha village, also in Yavatmal: 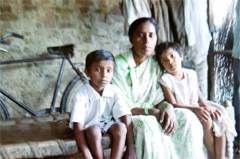 The widow and children of Santosh Bhaltilak of Dahihanda village in Akola. Santosh hung himself from the roof on the eve of Ganesh chaturthi earlier this year when Ravi, about five, was at home. His wife Sunita had gone with her daughter to her maternal home in the nearby village. Pic: Jaideep Hardikar.

Satish Shende, 15, is slowly learning to farm, but has dropped out of the school. In June last year, his father Atmaram, also a cotton farmer, consumed pesticide to end himself. Satish is too young to understand the complexities that forced his father to commit suicide. He knows his father is dead, but doesn't know why. He's yet to know that the debt burden has automatically shifted on to his shoulders along with the family's responsibilities. Satish will now have to marry off his two sisters, besides paying off the liabilities of his father by helping his mother Nirmalabai. Atmaram married off his eldest daughter, but had loans of about Rs one lakh (100,000) outstanding. "I first started herding goats, and got Re 1 per goat per day till recently. I had to look after 25 goats of the villagers," says Satish.

In Akola's Dahihanda village, Ganesh Thakre's son Sushil, 20, wanted to become an engineer. "We spent Rs 25,000 on his admission and fee to a polytechnic college," his mother Rekha informs. After first year, he left the college and joined his father to run a vegetable shop. In June, with every thing gone wrong at home and farm, a debt-ridden Thakre ended his life in distress, and Sushil left his studies forever. He says he has no option but farm and run vegetable shop to make ends meet.

"This is the saddest fallout of farmers' suicides," says Ritesh Parchake, a stringer with a language daily in Yavatmal. Adds another journalist Sanjay Bhagat, in Mahagaon, Yavatmal: "It can't get any worse than this. The Agose family was virtually penniless and still the government inquiry into the suicide of Digambar concluded that he had ended his life due to depression. Had the government taken a sympathetic view and given the compensation, this Andh tribal family could have breathed a little easier, and all the children could have continued with their education."

"Had the government taken a sympathetic view and given the compensation, this (penniless) Andh tribal family could have breathed a little easier, and all the children could have continued with their education."
-- Sanjay Bhagat, Yavatmal journalist

The state government and the Centre have refused to move, though. "The situation is responsible," was the flat answer Maharashtra Marketing Minister Harshwardhan Patil gave at a press conference in Nagpur, to persistent queries on reasons for unabated farm suicides.

Union Agriculture Minister Sharad Pawar was more forthcoming. "The state (Maharashtra) is doing as bad as any other state in the country in the agriculture sector due to declining private and public investments," said the Maratha strongman touring Vidarbha. But about suicides, he shrugged off the responsibility to point out: "Agriculture is a state subject."

But if agriculture is a state subject, why does the Centre not send the state's ministers to WTO meetings instead of the Central ministers? Pawar skirted this and further questions on the issue and his thrust still remained on private and corporate partnerships. He told reporters that a significant drop in investments in agriculture was the reason for the serious agrarian crisis prevailing in the country. A slew of measures, he said, would be needed to bring that sector back on the rails.

Meanwhile, Yashodabai, Ratilal Rathod's widow in Bandargaon, a remote and backward village in Yavatmal inhabited by the Banjaras (tribal community), has no knowledge of this backstage politics. She has lost her husband to an agrarian crisis that has for long been not just neglected but also blatantly ignored by the nation's polity.

When Dr M S Swaminathan, widely known as the father of green revolution and Chairman of the National Commission on Farmers, visited this family and offered to provide for the education to her children, a perplexed Yashodabai refused to part with her less-than-12-year-old daughters, Ranjana and Kalpana, both of whom dropped out of school after their father's suicide on August 21, 2005. "They help me eke out our living," she told a cavalcade of NFC members, agriculture department officials and some of top bureaucrats. The two girls work as farm labourers for Rs 20 each and contribute to the income of house. Their brother, Sadanand, is too small to work yet. 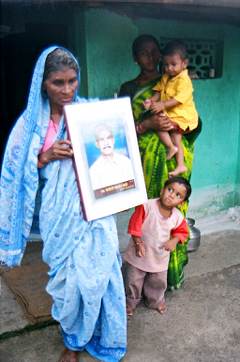 The mother, children and wife of Maruti Mahadev Rasse of village Pisgaon in Yavatmal. Martui, 28, committed suicide on 26 June 2005. His tiny tots are too young to understand the demise of their father. Pic: Jaideep Hardikar.

More than 20 cotton farmers ended their lives  and many others continue to do so in the dusty villages of Vidarbha, after the NCF toured the region. One estimate suggests that a farmer is committing suicide every 22 hours, and that rate, fear farm leaders, would accelerate over the next three months. Vidarbha alone has reported 110 suicides since 2 June 2005. That is since the fresh agriculture season commenced in the cotton belt.

Sadly, even widows are following the footsteps of their husbands who ended themselves in the past seven years. Meerabai Hatti Chavan, a Banjara woman, consumed pesticide on Diwali day (Nov. 1), in Ambezari village of Ghatanji, Yavatmal. Seven years ago, her husband had done the same thing. And the reason for both suicides was soaring debts. Now, their four children are at the mercy of the village for food and work.

In Chandrapur's Bhisi village, Baba Wanjari, another marginal cotton farmer ended his life out of distress on November 8 barely a year after his wife ended herself in their dilapidated hut. Four children, including two daughters, of the Wanjaris are staring at a grim future. Suvarna, 14, their eldest daughter, is still in a state of shock. She now has the responsibility of her young siblings. It was last year after scoring 60% marks in SSC she dropped out of school.

In village after Vidarbha village, amidst the graves of farmers, young girls and boys are fast losing their innocence to a piling debt and daunting responsibilities, after the suicide of their fathers. In every farming family that has seen the headman commit suicide, the children have eventually dropped out of schools to take up the plough and work like the beasts of burden at tender age. Girls are among the worst hit. Problems prop up when they get ready for marriage. Finding a groom for a girl whose farmer father commits suicide proves to be tough. The prospective groom could reject the proposal for two more reasons: One, the economic compulsions of bride's family would force the marriage to be a low-key affair, and two it could shift some of family responsibilities (including debt of bride's father) on to the groom. "That's why many families don't report the suicides, fearing for the social ramifications," says a high ranking police officer who asked not to be named because the issue was politically delicate.

But now, these kids are potential suicide candidates, fears local stringer Parchake. And he is not wrong. Neeta Pundalikrao Bhopat, 19, a bright student of BA first year in Aasra village of Amravati district snapped her life by consuming pesticide on November 4, during Diwali vacation. "My family can't make even a thousand rupees a month. And I have two younger sisters. My parents can't bear the burden of our marriages when we don't have enough to eat. So, I am ending my life. Nobody should be blamed for it," wrote Neeta in her neat handwriting, minutes before she took the extreme step. She had lots of aspirations, the villagers remember. But back home, things had slowly come to a boil, and she could sense, most certainly, that if it weren't her, it would be her father any moment. Pundalikrao is a marginal farmer of four acres of unirrigated land. He has private debts amounting to Rs 75,000.

So, this student of a nearby Mahatma Jyotiba Phule College consumed Endosulphane and bade good-bye to the world. The suicide note speaks much more than those four lines. It insists that the agrarian crisis has ripped apart farming households in rural Vidarbha. It has ensnared its every member  infants, young and old, alike. It's not just the death of a farmer when he commits suicide but the end of innocence for his kids as well.