It is not just another feature film; new generation director Kamaleshwar Mukherjee's fictionalised depiction of the life and genius of iconic film-maker Ritwik Ghatak is in itself cinema at its best. Shoma A Chatterji reviews the film.
06 July 2013 -

Fictionalising the life and work of one of the most controversial and misunderstood geniuses of Indian cinema in the same language - cinema - is not an easy task. But it is also a challenge and a risk which a relatively new entrant into cinema took up. Kamaleshwar Mukherjee who changed tracks from practicing medicine to directing films (beginning with Uro Chithi), has made Meghe Dhaka Tara, a fictionalized, full-length Bengali feature film on Ritwik Ghatak. In keeping with the time Ghatak lived and worked in (1925-1976), Mukherjee chose to make the film in Black-and-White in post-production and this sharpens the conflicts and ironies of his life and his work, blurring the lines of difference between the two.

“My film is a fusion of facts gleaned from Ghatak’s life and facts gleaned from his directorial work. It has been challenging to bring across how the mind of this creative genius worked. Meghe Dhaka Tara is by no means a biographical celluloid essay. It is an exploration of the filmmaker’s mind,” says Mukherjee.

For Ghatak, “The movie camera was not just an obstructive eavesdropper but a commentator, philosopher, historian, critic and poet, not a peep window into the lives of a group of characters but a testament - narrating, recalling, rejecting, accepting, questioning protesting, losing and winning,” wrote the late Safdar Hashmi. Kamaleshwar Mukherjee has tried his best to use a narrative structure that vacillates between the past and the present beginning in 1969 and going back to 1933, to tell the story of a man who became an international icon of cinema only after his tragic death. 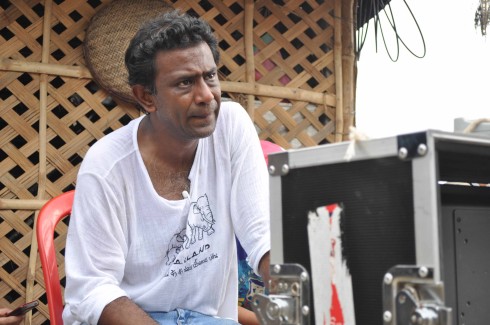 Instead of following a dull, chronological narrative that follows a linear storyline beginning with birth and ending in death, Mukherjee opens the film with a little-known incident in Ghatak’s life. It is situated within the walls of a mental asylum in Calcutta where Ghatak was admitted for treatment of his incurable alcoholism and bouts of depression. Neelkantha Bagchi (Ghatak’s name in the film) played by Saswata Chatterjee, is brought to the asylum by his wife Durga who has left three small kids behind to bring her husband here in the hope of getting a cure. She is, at the time, also appearing in exams to qualify as a primary teacher and trying for a job.

Two things happen within the low-key asylum that saw better days in the past. The first is the strange relationship that evolves between the patient Neelkantha and the resident doctor, Dr. Mukherjee (Abir Chatterjee), who offers a poetic counterpoint to Ghatak’s erratic nature with his subtle sanity. Dr. Mukherjee embarks on a metaphorical journey with Neelkantha into his past, appearing at random in a haphazard manner in harmony with Ghatak’s irrational psyche.

The second is Neelkantha trying to put up a play written by him within the asylum, with the inmates participating under his direction. If this was an insane idea, Neelkantha was far from sane. The preparations for the play - Neelkantha trying to set up the physical props, Neelkantha directing the mentally sick inmates, desperately trying to extract speech out of a young rape victim Phoolmoni, who is numbed by the shock -- is dotted with different facets of Neelkantha’s journey through life. It traces his growth from an adolescent boy to a young man who falls in love with Durga (Ananya Chatterjee), his participation in the people’s theatre movement, his writings, his films that flopped miserably and that critics did not understand, except Meghe Dhaka Tara, which he describes as ‘the only exam I passed in.’ In all of this, Dr. Mukherjee observes him and tries to understand the psyche of this disturbed individual with a wife more loving and loyal than the husband deserved.

What made a person, who hated to touch any liquor and in fact, put up a notice in the studio warning his cast and crew against the clandestine intake of alcohol, become so incurably addicted that his wife was forced to admit him for psychiatric treatment of his disturbed mental state and his alcoholism?

Meghe Dhaka Tara is not a linear story. In fact, it cannot even be called a ‘story.’ It is a collage of moments drawn from his life, concepts, his ideologies, his eccentricities, his reading, his writings, his anger and his frustrations expressed everywhere, and even the adulation of some of his fans within the asylum - a caring nurse who has seen his Megher Adale (the pseudonym for Ghatak’s Meghe Dhaka Tara) and a non-Bengali inmate who has seen three of his films that, to him, looked like beautiful paintings but “kuchh samajh mein nahi aya.” Dr. Mukherjee is familiar with his famous name but has not seen his films.

During the rehearsals of the play, Neelkantha falls sick so often that the doctor decides to give him a series of electric shocks. Neelkantha struggles to make his ‘actors’ perform, struggles with his anger and the frustrating reminiscences he shares with the doctor, punctuated with the electric shock cycles he is forced into. On the day of the play, he is wheeled into the asylum’s auditorium but is too sick to lift his head. Dr. Mukherjee, wife Durga and the other patients form the audience. The play begins and Phoolmoni, the rape victim who has lost the power of speech, springs up to perform the great dance of the Mother Goddess in full fury.

Kamaleshwar Mukherjee has used the metaphor of Bangabala in the closing shots of his film, now in 'colour', where a young girl, Bangabala, from Ghatak's Jukti Takko Aar Golpo is given concrete shape to look like the rape victim Phoolmoni in the mental home. She waits for Neelkantha out in the fields, as if inviting him to join her back, to his roots in Pabna and other places in East Pakistan once a part of undivided Bengal. Mukherjee beautifully suggests the 'liberation' of Ghatak who frees himself to join his 'Bangabala' to go on a new journey and perhaps begin to rewrite his life again. Phoolmoni is liberated and so is Neelkantha. The director does not use the darkness of death but the brightness of a yellow horizon in the distance, shown in bright colour, where the two figures become smaller and smaller till the film freezes to a close.

To draw out the full implication of his deeply disturbed psyche, Mukherjee has placed Neelkantha against the political-historical backdrop of the times he grew up in, covering the Bengal Famine (1943), the beginning of the 20-years Vietnam War (1955), Yuri Gagarin’s first flight into space (1961), the Partition of India (1947) followed by the Indo-Bangladesh war (1971), and many similar events through clipped English radio broadcasts in a voice-over by Arijit Dutta.Â  Other references like the Partition of Bengal (1905), Ray’s films winning international acclaim, brutalities, atrocities and rapes committed on women and children are structured into the script in dialogue and monologue.There is the repeated metaphor of a tall, burning effigy against a distant horizon in flames that could be an expression of Ghatak’s psyche on the one hand and a symbol of the burning times he witnessed at first hand on the other.

The film pays tribute to world cinema - through posters from Battleship Potemkin and other films, portraits of Hollywood stars like Clark Gable and Greta Garbo on the walls of Calcutta’s Metro Cinema and a reference to Satyajit Ray’s international acclaim through Pather Panchali. The home of ‘Supriya Choudhury’ (Mumtaz Sorcar) has a big portrait of Sophia Loren. Mukherjee makes imaginative and aesthetic use of filmic codes, e.g. camera, montage, music, sound, even a movieola. The presence of cinematic items and other paraphernalia, such as the movie camera, the boom, the lights, the make-up, the costumes, a moving reel, the make-up room, etc, makes this a self-reflexive film, Black-and-White adding an archival touch minus gloss or glamour.

“After seeing Jukti Takko Aar Goppo, I was inspired to make a film on Ritwik Ghatak. I chose the title Meghe Dhaka Tara from his classic film because it defines his life very well. If Satyajit Ray’s films were eye-openers to classics, Ritwik Ghatak was unique in his varied experiences with form and content. The content of his films was pro-people and their narratives were strong, angry, even universal,” says Kamaleshwar Mukherjee.

Meghe Dhaka Tara begins in 1969 and moves back and forth, showing Neelkantha as a boy hitching a ride with his little ‘friend’ from Bari Theke Paliye in the glossy new Chevrolet that later became the jalopy in Ajantrik. What made a person, who hated to touch any liquor and in fact, put up a notice in the studio warning his cast and crew against the clandestine intake of alcohol, become so incurably addicted that his wife was forced to admit him for psychiatric treatment of his disturbed mental state and his alcoholism? The camera pans across the wall in one shot with the notice pasted on it, across time and space spanning posters of his films, to pan back at the notice - now wet, faded and crumpled on the same wall. It then tracks down to show the same man, sozzled, with an unkempt beard, bright eyes drooping, seated under the same poster fondling his bottle. 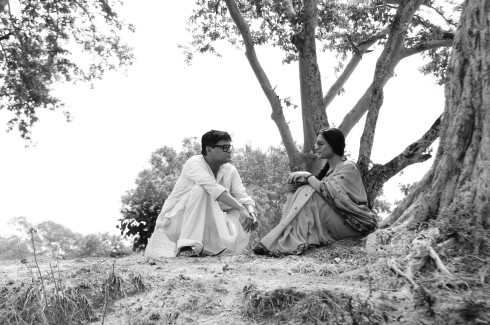 The play-within-the-film offers a glimpse into his subjects - the archetype of the mythological mother he was famous for, the victims of Partition, and the tragedy of being a refugee. For the first time through cinema, the audience is offered the chance to have a glimpse of the theatrical creativity of Ghatak. His volatile, love-hate relationship with wife Durga, his disillusionment with the people’s theatre movement, his deep frustrations consequent to the failure of all his films except Meghe Dhaka Tara, the blocking of the release of Nagarik, his incomplete scripts and films that triggered alcoholism in a man who did not touch it are brought out through small scenes that cut quickly into the next before they begin to drag. Kamaleshwar has not used any archival clippings from Ghatak’s films. He has treated them through changed names mentioned in dialogues and conversations and film posters spread across the footage at different points.

Soumik Haldar’s cinematography and Rabi Ranjan Maitra’s editing are a beautiful blend that bring out the erratic temperament, language and structure of the film, often viewed through the delirium and alcohol-soaked vision of a person fluctuating between sanity and insanity and through the narrow lanes of his delirious mind - through time, events, incidents and bytes of real life. Biswadeep Chatterjee’s sound design is dotted with sounds of gunshots, blasts, music pieces, voice-overs, and silent pauses. Tanmoy Chakraborty’s production design suggests imagination and research in the way that the nondescript, uncared for interiors of the mental home, his familial home and his past dotted with disturbances have been depicted with imaginative aesthetics. The best quality of the post-production is that there is no attempt to glamorize the visuals.

The only fictitious character is Dr. Mukherjee, brought out beautifully by Abir Chatterjee. His objectivity complements Neelkantha’s involvement, passion and obsession, pain and struggle in every scene that pools them together.

The only negative feature of the film is its inordinate length, mainly on account of repeat shots of certain episodes where a single shot tells everything and repeats are superfluous. But in Meghe Dhaka Tara, Bengali cinema has found a new director who has the guts to face challenges, cinematic and otherwise.