The Modi government has moved fast and furious on charting a new policy regarding intellectual property rights; Shalini Bhutani’s recap of recent developments shows that much of it has been with an overt focus on industry, rather than innovation in general.
20 January 2015 -

In early September 2014, India’s Minister of State for Commerce and Industry, Nirmala Sitharaman had announced that India would get a ‘new’ policy on intellectual property (IP) within a period of six months.

Accustomed to the slow pace of both economic reforms and governmental policy-making at the Centre in general, no one would have expected the state machinery to actually come out with a policy document before the year-end, especially since it was reported that it was tasked to a mere team of six, sans any proper office infrastructure.

However, the Union Ministry of Commerce and Industry, through its Department of Industrial Policy & Promotion (DIPP), announced the first draft of the National IPR Policy on 30 December 2014 and even invited those interested to submit their comments on or before 30 January 2015.

It is important to understand the alacrity behind the official process. A quick recapitulation of the relevant events from September to December 2014 will help place the IP policy process in perspective. It will also help ordinary citizens and unrepresented stakeholders assess how much they can expect to change in the text, even as the process is opened up for public comments.

The Prime Minister of India, Narendra Modi undertook his maiden visit to the United States of America (USA) through 26-30 September 2014. In a statement before his departure to the USA, he expressed confidence that the visit will mark the start of a new chapter in the US-India strategic partnership. During that visit he also held a bilateral summit with the President of USA, Barack Obama.

It is, of course, no secret that big business and investors from USA have always wanted a favourable IP environment in foreign markets. During the visit, Modi met with the CEOs of all major US companies and investment institutions in Washington. The US-India Business Council (USIBC) also hosted him on one occasion. 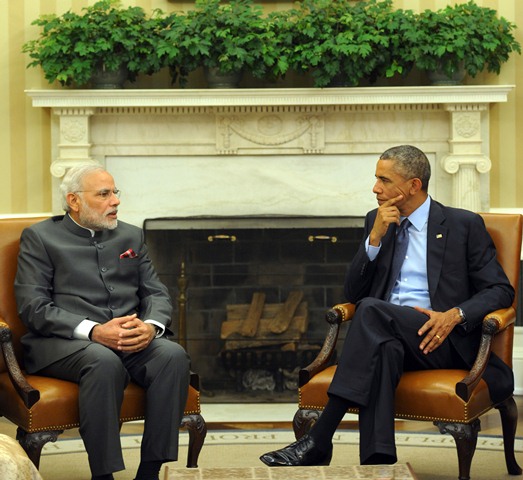 PM Narendra Modi in a bilateral meeting with the US President Barack Obama at the White House in Washington DC on 30 September, 2014. Photo Courtesy: Press Information Bureau

The US-India Joint Statement issued after the bilateral summit on 30 September 2014, stated, among other things, that the Indian Government (a)greeing on the need to foster innovation in a manner that promotes economic growth and job creation…committed to establish an annual high-level Intellectual Property (IP) Working Group with appropriate decision-making and technical-level meetings as part of the Trade Policy Forum.

The joint editorial by the two leaders in the Washington Post on the same day was clear indication that the motto was to be a ‘Forward Together we go’.

The DIPP issued a statement on the bilateral mechanism for discussing IPR Issues with USA on 3 October 2014, though it also mentioned that an Indo-US Trade Policy Forum had already been in operation since 2010. An Innovation and Creativity Focus Group in that forum pre-dates the formation of the new joint IP Working Group. Under the circumstances, the necessity for setting up a joint Indo-US IP Working Group was not really explained.

An IPR Think Tank was constituted by the DIPP in October 2014 and a press release announcing the same was issued on 24 October 2014. Among the terms of reference of the think tank, drafting the National IPR Policy topped the list.

The timing of the formation of the IPR Think Tank was notable as the prime minister had only recently returned from his visit to the USA. Civil society groups wrote an open letter to PM Modi around the same time, cautioning him about US bilateralism on the issue of IP and urging him not to deal with the subject from the relatively narrow confines of trade and economic policy.

They reiterated that the issue of IP is not only crosscutting, but also has multiple dimensions beyond that of industrial policy and should therefore involve a process outside the DIPP. A holistic IP policy will necessitate gathering inputs and analysis from various sectors, such as agriculture, education and health.

In mid-November, it was reported that India and USA had come to an agreement on a contentious issue that the two sides had been wrangling over in the World Trade Organisation (WTO) for some time – that of public stockholding for food security purposes. India took a bilateral route in the matter rather than a multilateral one at the WTO, where the problem arose.

Though this was not an IP dispute (of the kind seen when US activated the WTO’s Dispute Settlement Mechanism in a complaint on India’s IP laws), the practice sets precedence for resolving differences at a bilateral level with the US trade negotiators, without galvanising developing country partners on an issue that affects them equally.

This is despite the signal that the Ministry of External Affairs sent out previously in the context of the PM’s presence at the United Nations, indicating that it was an affirmation of India’s abiding commitment to multilateralism.

November was also when the US Assistant Secretary of State for Economic and Business Affairs, Charles Rivkin, travelled to Mumbai and New Delhi, through 13-20 November for the India-US Technology Summit, coorganised by the Government of India’s Department of Science and Technology, the Confederation of Indian Industry and the US Department of State. This was held for the first time with the US as a country partner.

Continuing on the bilateral track, the US-India Trade Policy Forum meetings were held as scheduled on 25 November 2014 at New Delhi. This Forum is the premier bilateral platform for addressing trade and investment issues between USA and India. The US Trade Representative (USTR) Ambassador Michael Froman met with Indian Minister Nirmala Sitharaman to discuss issues including agriculture, investment, as well as Innovation and Creativity (read intellectual property rights).

In a particular work session on IPR, when the Indian minister highlighted India’s work on a new IPR policy, the United States agreed to share information on this subject to support India’s on-going efforts. But it is important to note that in the dialogue architecture between the two countries, the issue of IPR is largely being dealt with under the rubric of commerce.

In December the USTR completed the Out-of-Cycle Review (OCR) of India’s IP policies. It is reportedly satisfied for now by the ‘useful commitments’ made by the Modi government on IPR and refrained from taking any action against India. The official statement from the USTR on the Out-of-Cycle Review of India asserted, “The United States notes these steps and urges India to further strengthen and deepen our bilateral engagement on IP issues in the coming months and beyond.”

Meanwhile, talks at a bilateral level through government and business channels continue. On 20 January 2015, the USIBC hosts the Secretary, DIPP, Amitabh Kant in Washington DC. President Obama is scheduled to visit India later in the month. The high-level engagement on the IP issue has now been institutionalised, as a result of which the economic partnership between the two sides is expected to deepen.

In the light of the ongoing economic diplomacy, it will be critical for Indian civil society to ensure that India’s National IPR Policy is drafted as a social policy. 2015 also marks 20 years of the WTO’s IPR agreement – TRIPS. While insisting on the long-pending review of TRIPS at the global level, at the national level the government policy on IPR must be kept close to the needs of the people of India rather than being charted as one aligned to the principles of high-level commerce and technology initiatives.