Inexplicably, Maharashtra's bosses have gone into hiding after announcing a "bailout package" for Vidarbha's beleaguered farmers. Not a single pie has been distributed yet, two months after the chief minister, Vilasrao Deshmukh, announced it. Farmers' suicides are failing to move a heartless government, reports Jaideep Hardikar.
11 March 2006 -

Yavatmal, Amravati, Wardha: It's only getting worse and worse. The first nine days of this month have seen 25 farmers commit suicide in Vidarbha. The register of farmers' suicides is swelling with every passing day in Vidarbha  367 according to the Vidarbha Jan Andolan Samiti (VJAS) at the last count on 10 March -- for the agriculture season that started on June 2 last year. Over 150 suicides have happened in the last three months, and a hundred of them are in Yavatmal alone. Those who are clinging on to a hope for better life and an end to the crisis are unfortunately discovering far greater levels of distress and desperation, even as the marketing season silently comes to end. 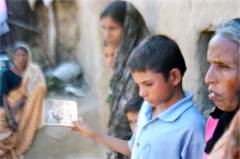 Mangesh Suroshe, 12, holds the only picture of his father Rameshwar, 35, who committed suicide in February 2006, while the farmer's widow Annapurna and his mother Godavaribai stand in grief. Pic: Jaideep Hardikar.

Inexplicably, the state bosses have gone in to hiding, after much brouhaha over the announcement of, what they call, a bailout package. Ironically, not a single pie of even that package has been distributed yet to the beleaguered farmers, two months after the chief minister, Vilasrao Deshmukh, announced it in Nagpur.

"Continuing spell of suicides is a concern; the implementation of package is being delayed," Deshmukh himself admitted in Yavatmal, while addressing a farmers' rally on February 27, 2006. He had announced the much-trumpeted package during the winter session of the Maharashtra Legislature at Nagpur. That delay though has cost over 150 lives  that's the number of farmers who committed suicide since the announcement of the package in Vidarbha.

The Rs.1075 crore package is for only six cotton districts of Vidarbha, but the ugly spell of suicides is spreading in eastern districts of the region that grow paddy. Over 30 paddy growers too have ended themselves in the past three months  in Gondia, Bhandara and Chandrapur districts. And the central reason, evidently, remains the same: declining market prices and rising production cost.

"The trend is not surprising," says farmers' leader Vijay Jawandhia at Wardha. "Paddy cultivators are not getting the minimum support price, which is why they are unable to recover the high production cost." A little trigger is disastrous then.

The losses to the cotton growers are phenomenal this year, says Kishore Tiwari of the Vidarbha Jan Andolan Samiti. Maharashtra government withdrew advance bonus of Rs.500 a quintal over the guaranteed price before the commencement of the season  that alone amounts to a loss of thousand crore rupees to the cotton cultivators, notes Jawandhia. "By March 9, the federation's procurement stood at 15 lakh quintals, while that by the private buyers had crossed a hundred lakh quintals," says a high placed federation official at Nagpur, who preferred to not be named. "That's a phenomenal dip considering the last year's record 250 lakh quintal procurement by us," he adds. "Whereas the total bills stood at Rs.4000 crore last year, this year we've had to pay only Rs.180 crore to the farmers so far." Add to that the abysmal prices in private markets that have picked up about a hundred lakh quintals of cotton from the growers. (1 lakh = 100,000)

Suicides continue, even as the state bureaucracy holds programmes in villages to "revitalise the self-confidence of farmers" or "generate awareness."

Former General Manager (Procurement) of the Maharashtra State Cooperative Cotton Growers Marketing Federation S N Deshmukh says the yield may not be more than 170 lakh quintals this time around. That means about 50 lakh quintals of cotton is still with growers, procured neither by the federation nor by private buyers. And the clamour for selling it is just picking up.

"It's clear, the government is pushing the farmers to private buyers," Jawandhia points out. By the end of January, the state-run federation had silently closed down its procurement centres without giving any reason, leaving the farmers in the lurch. In Yavatmal, tens of farmers awaited the federation or private traders to buy their cotton. Nobody did so for days, pushing the cultivators to a point of desperation. So much so that at one centre angry farmers resorted to violence.

But the state government remained unmoved, negligent towards their plight. What is more, the government had clandestinely applied a clause to its policy of procurement. The federation decided not to buy substandard cotton (called Kavdi in this region), mostly the one that comes with the third or the fourth picking. Kavdi forms a substantial quantity and is processed into bales and sold at cheaper rates to the mills. The decision not to buy Kavdi was not made public. Farmers did not know this. It was a silent move -- the government feared it would have triggered a political storm.

However, in February the government rolled back that decision apparently under fire from the Centre over the suicides. "We had decided not to buy cotton that was below par on its micronear quality, but we've withdrawn that condition now," marketing minister Harshwardhan Patil said at a news conference in Nagpur on March 1. He said that was the reason why the federation's procurement centres did not buy cotton from cultivators for some time. "Now that we've issued the GR, the centres will start procurement." 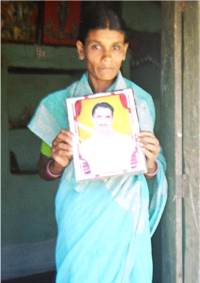 Home alone: it's a long and treacherous journey ahead, and Shantabai knows it won't be easy for her to run the house. In Awalgaon in Chandrapur district's paddy producing Brahmapuri block, Shantabai lost her husband Yadav Narule, 44, on 12 December 2005, to a crisis hardly acknowledged in this belt.

"We can't keep cotton beyond March. Its quality will start deteriorating fast if it is not sent for ginning soon," Deshmukh says. If their remaining cotton is not bought now, farmers are doomed. But this is the trick, says Tiwari. "Now the growers will sell it in distress at any (little) price."

Kavdi is being procured at Rs.750 a quintal, said a federation official. But the federation will try to brand even the good grade cotton as Kavdi and try to buy all of it at Rs 750. This is the end of the season. Gradation has always been a problem and steeped in corruption. The government-run agency has presumed that the cotton left to be sold is of poor quality. The abysmal prices will ensure farmers won't go to the federation anyway (which is the main reason why the government has taken this decision) and would prefer to sell cotton to private traders at slightly better prices. This is how the government is withdrawing itself from the game - by hook or by crook.

Another factor: The losses have been accentuated by failure of Bt seeds, notes an official in the federation's Nagpur office who prefers to remain unnamed. Bureaucrats in the federation do not want to come on record fearing that may create a further controversy. While the crop failed, the cultivation cost multiplied manifold. And drop in prices mean a sure disaster, says Tiwari. But not all the cotton crops that failed were due to the bollworm pest. In fact along with the pest attack, the cause for devastation this time around was a disease called 'Lalya' in local parlance, or "reddening". Farmers say this was unseen before, and that it affected Bt more than the non-Bt cotton crop.

Suicides continue, even as the state bureaucracy hold programmes in villages to "revitalise the self-confidence of farmers" or "generate awareness." In Pusad block of Yavatmal, for instance, the sub-divisional officer, Vijay Swami, hosted discourses in villages to prevent farmers from committing suicide. He called it a way to reinvigorate the lost confidence among the crisis-hit peasants of his area.

Farmers though want a better price to their yield. "Until we get better prices and institutional credit, the situation won't improve," holds Anil Kale, a progressive farmer in Pandharkawda. The prices have dwindled to Rs.1400 a quintal in private markets, which start the day's procurement with a better price to draw farmers to their mandi. "But by the noon, rates start sliding, and by the evening, we may get only Rs.1400 or further less a quintal," says a farmer.

Holds Jawandhia: "These 'jan-jagruti' programmes may go on, but after a slew of important policy measures  institutional credit and better prices, of all." Says Tiwari: "We don't need to make aware the farmers any more. We've to make the heartless government aware of the grass-root situation. The need is not of shetkari atmavishwas jagruti abhiyaan, but sarkar jagruti abhiyaan!" So far, the government's approach to tackling such a serious issue has been appalling.

In fact, the government's drive against sahukars (rural money lenders) notwithstanding, exploitation is going unchecked. Sanjay Mohod, 35, was beaten by a whip by his lender, when he failed to repay Rs.400 borrowed a month ago in Amravati's Chincholi village. Broken by that, Mohod made a futile bid to take his own life. With two acres of land to farm upon, he also works as a labourer to make his both ends meet.