Why do these ghastly stories rarely make news headlines?

Crime and atrocities against Dalits is on rise, while support and justice in these cases are long delayed and the coverage of these crimes is inept, biased or voyeuristic. Pushpa Achanta finds out why media, the fourth pillar of our democracy, is falling short in its duty.
24 August 2015 -

‘Honour’ killing in English, Gaurava kole in Kannada, Khap Panchayats in Haryana and their equivalent in other parts of India: sadly, these are some terms associated with relationships of love and marriage and in recent years, even friendships that transcend the boundaries of caste, religion or faith, class and gender across India.

The brutality and wantonness of some threats, attacks and murders pertaining to inter-caste, inter-faith and gender ‘non-conforming’ relationships makes one wonder if the persons executing the crime are human, especially when they are the parents or siblings of one or both people in the relationship. Of course, usually the people who are beaten up, assaulted or killed are one of the couple and sometimes his or her family members, friends or other supporters who all belong to a minority caste, religion or gender. Shamefully, news media reports on such occurrences are typically sparse, biased or voyeuristic.

Then, there are incidents like the bestial rape and murder of two teenaged Dalit girls in  Badaun district of Uttar Pradesh that occurred in May 2014 and the shocking rape of four teenage Dalit girls in Bhagana village in Hissar district of Haryana in March 2014. These inhuman incidents are often passed off as suicide or false or exaggerated, since the police, politicians and sometimes even government officials are often complicit in the violent acts, even if indirectly.

Typically, in situations like the above, the police do not register any complaints or do so only after pressure from the family of the survivor or victim and or human rights defenders and activists. Even administrative officers in the district initiate relevant investigation only upon compulsion, driven by supporters or sometimes the news media and local public. Despite the stringent provisions of the SC/ST Prevention of Atrocities Act 1989), assistance and compensation also depends on the build up of such pressure as referred to above. 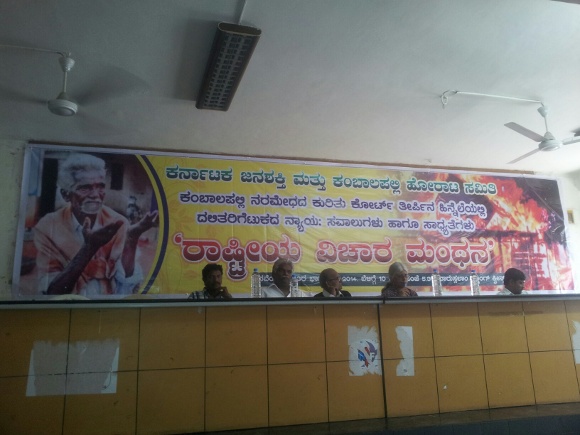 Survivors of Tsundur and Kambalpalli massacres and their allies, speaking at a seminar on Injustice to Dalits facing caste atrocities, Bangalore. Pic: Pushpa Achanta

Sadly, it is not just the entrenched groups that have a role to play in this perpetuation of violence and discrimination. Media – newspapers and television channels – do not report such incidents regularly, or in sufficient detail, especially when the incidents involve Dalits. They either sensationalise or trivialise the story without reporting the crucial facts in a complete and correct manner. If at all the story is published or broadcast, it is encapsulated in brief as a snippet or a bite, except perhaps in regional or local language editions and channels.

For instance, the beheaded body of a young Dalit male engineering student from Namakkal district in Tamil Nadu, was found beside railway tracks in June 2015. It was initially termed as suicide. The revelation of murder, relevant arrests and investigation came only after intense pressure from the family and human rights defenders.

Similarly, in an incident in June 2015 in Bangalore, a young Dalit woman who hails from Anantapur district in Andhra Pradesh, her younger brother, father and uncle were brutally assaulted by the supporters of a Bangalore-based man belonging to a dominant caste. This was because they had requested the man to fulfil his promise of marriage to the young Dalit lady with whom he was in a relationship and had fathered a child. Most English newspapers and television channels barely reported these situations.

Questioning the minimal and unsatisfactory reportage of crimes against Dalits through a Facebook post a Bangalore-based correspondent of an English national daily provided the examples of the sketchy manner in which English newspapers based in southern India covered the Tamil Nadu incident.

Another post on Facebook by Meena Seshu, a feminist and human rights defender based in Kolhapur, on two recent incidents of Dalit murders in Maharashtra evoked the following response by Sudha Nagavarapu, a health rights activist based in Bangalore, “It is important to expose these ghastly happenings through alternate or independent media. As always, such incidents are rarely reported in newspapers or television channels.”

The reasons behind under-reporting

There are many reasons for the poor news coverage of crimes against Dalits. One is the lack of a significant number of persons with these social identities in the news media which has come to be owned in large part by private corporations or families who tend to be from the dominant caste or the majority religion.

Although the caste, faith or gender of a journalist or a publisher must not matter to the kind of news being reported, reporters are unlikely to feature stories that they consider unimportant or do not relate to directly, because they have a different social identity. At times, personal bias, ignorance, indifference or insufficient experience or knowledge of an issue may also lead them to suppress relevant news deliberately or unintentionally. Some of the inadequate reporting can also be attributed to an absence of awareness, sensitivity and objectivity not only among field staff, but also in the editors.

In her essay, The Doctor and the Saint (an introduction to Navayana’s annotated, critical edition of Dr. B. R. Ambedkar’s famous and scintillating essay Annihilation of Caste), Arundhati Roy states, “In 2006, the CSDS did a survey on the social profile of New Delhi’s media elite. Of the 315 key decision-makers surveyed from 37 Delhi-based Hindi and English publications and television channels, almost 90 per cent of the decision-makers in the English language print media and 79 per cent in television were found to be ‘upper caste’. Of them, 49 per cent were Brahmins. Not one of the 315 was a Dalit or an Adivasi; only 4 per cent belonged to castes designated as Shudra, and 3 per cent were Muslim (who make up 13.4 per cent of the population)”.

Moreover, as television news programmes are assigned targeted rating points (TRPs) based on viewership, channels are forced to broadcast content that is sensational or even voyeuristic, rather than of substance or importance.

The under-reporting of occurrences of caste-based discrimination (overt or otherwise), harassment, abuse, violence (physical, oral and sexual) and murders is not just sad and shameful but also a sign of exclusion and social irresponsibility of a kind. The headline, content and timeliness of a news report are very crucial for the survivors to get immediate medical and legal assistance, police intervention and the capture of the perpetrators, as applicable. Oversight or shoddy coverage therefore leads to continued perpetration, directly or indirectly, by encouraging the guilty or others with a promise of invisibility and impunity.

It also lets the government get away without penalising or punishing the wrongdoers in a timely and satisfactory manner.

Unfortunately, the location of a crime on Dalits too has an impact. If it happens in or around urban areas, the likelihood of it being reported is greater as there are usually more correspondents. Also, social workers who intervene have a greater chance of being heard or noticed, although the follow up may take a long time in many cases.

Between 2001 and 2013, a total of 4,09,642 (including 39,408 in 2013 alone) crimes were reported against Dalits across India under various categories such as arson, murder, rape, dacoity, kidnapping et al, according to data obtained from the National Crime Records Bureau (NCRB). However, at the end of 2013, investigation and trial were pending in 14,168 and 99,928 cases respectively. This shows that 3.45 per cent were not even investigated while nearly 25 per cent of the crimes are awaiting trial.

If this is the condition of incidents noted by the government, one is certain that the reality of caste atrocities is much worse, considering that many crimes are unreported by news media or state agencies.

During a discussion held a few months back in Bangalore on government statistics on crime, S. T. Ramesh, DGP (retired), Training, Karnataka said, “NCRB data is obtained from each state through the police. It may not provide statistics completely or correctly as it could reflect on the rate and status of crimes in a specific state, a fact which most governments are not keen to project”.

Amudhan R. P., an acclaimed documentary filmmaker and media activist based in Tamil Nadu raised attention on social media to the poor manner in which the press conference releasing the socio-economic and caste census (SECC) data in early July 2015 was covered on the television. The relevant headlines and reports on the website of many national English newspapers and channels merely referred in brief to the government’s release of the SECC, instead of providing highlights or even a summary of the data.

India Today, a national magazine published in English (and a few other languages) was the only publication to have provided an insightful summary. A few publications remarked on how the government did not release the caste-wise distribution of the Indian population although it was available. A few reports that came out are sampled below:

NDTV briefly reported the release but did not summarise the content of the SECC data;

The Hindu offered brief insights into the SECC data;

Business Standard had a politicised analysis of why the caste wise data in the SECC may not have been released.

It is essential to remember here that the B P Mandal Commission published a report on reservations in 1979 while the K B Saxena Commission released a study on prevention of caste atrocities (initiated by the National Human Rights Commission in 2004). Additionally, the National Commission for Scheduled Castes carried out investigations into instances of discrimination and harassment based on caste in the All India Institute of Medical Sciences in 2007 and the non-implementation of caste-based reservations in the Benaras Hindu University.

All of the above also made specific and detailed recommendations to enhance the socio-economic status of Dalits in general, eliminate discrimination and harassment and render them assistance and justice when they are subjected to abuse, assault, violence, murder or other crimes. However, ground realities show that there is minimal implementation of any of these recommendations.

This is unpardonable. However, the greater worry perhaps is that the Indian middle class is not even aware of the rampancy of such crimes and in their mind, most feel that such instances rarely happen nowadays. Going by the current trends however, crimes against Dalits, minimal assistance and justice to the survivors and poor reportage of the incidents are likely to continue or increase.