Pushpa Achanta describes the unrelenting efforts of the Karnataka Dalit Mahila Vedike (KDMV) in educating members of the Dalit and Adivasi communities in the state about their legal entitlements and helping them wage battles for justice in cases involving caste atrocity and discrimination.
06 April 2015 -

These places remind us not only of the inhuman and shameful caste-based discrimination, violence and murders that we saw in them, but also of the prolonged court trials, threatening of witnesses and allies and unjust acquittal or minimal punishment of the perpetrators of these horrifying crimes.

All of this happened despite powerful legislations in place, such as the Protection of Civil Rights Act 1955 and the Scheduled Caste/Scheduled Tribe Prevention of Atrocities Act (SC/ST PoA Act) 1989, prescribing stringent punishment for those committing crimes on Scheduled Castes or Scheduled Tribes (Adivasis).

The law also seeks to monetarily, medically and legally compensate Dalits and Adivasis whose lives, homes or possessions are attacked. Additionally, the Indian Constitution lists the fundamental right to non-discrimination and equality through Articles 14 and 15 and prohibits untouchability and bonded labour through Articles 17 and 23.

However, “strong and essential laws protecting the rights and civil liberties of all Indians often do not guarantee justice. In fact, when dominant caste and community persons harm socio-economically marginalised communities such as Dalits and Adivasis, complaints usually remain unregistered. Even when they are registered, the First Information Report (FIR) may be incomplete or incorrect. And then the guilty may be untraced or unpunished or bailed out,” observes Yashoda P. This feisty 40-year-old lady based in Anekal taluk in Bangalore Urban district founded the Karnataka Dalit Mahila Vedike (KDMV) in 2007 and heads it.

KDMV is a state-wide collective of socio-economically marginalised women championing the advancement of their peers by creating awareness about basic rights and social entitlements, and assisting them when they are discriminated against or harassed at home or outside. A part of the National Federation of the Dalit Land Rights Movement (which grew from the National Campaign for Dalit Human Rights), KDMV helps nearly 20,000 Dalit women in around 22 of Karnataka's 30 districts. 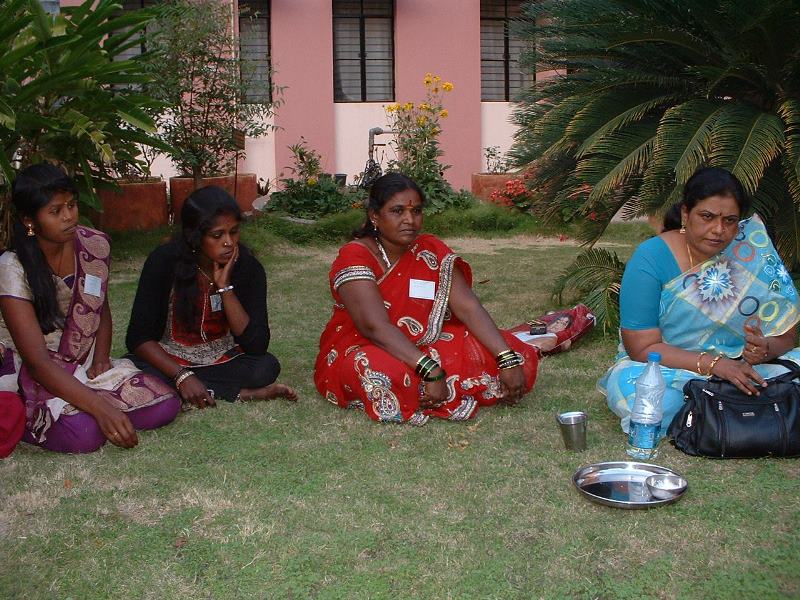 KDMV members at an emergency meet of the forum. Pic: Pushpa Achanta

Further, KDMV partners with nearly 100 community groups of Dalits and Dalit women addressing caste, gender discrimination and assault issues and also guiding them in accessing social benefits. Around 120 Dalit women who joined through local women's rights groups or organisations or as individuals are in KDMV as leaders at the district and taluk levels. A few women who have fought domestic violence, workplace or public sexual harassment and caste atrocities with KDMV's support through its district-level leaders and representatives have also joined the forum.

Examples are many. In 2009 when a Dalit lady in Nelamakana village of Malavalli taluk in Mandya district resisted sexual abuse by a dominant caste man, he attacked her brutally and set fire to her and disappeared. KDMV pressurised the local police to register complaints under the SC/ST PoA Act and protested (with human rights groups from Bangalore) against government inaction. Consequently the state provided the lady’s family cash compensation of Rs. 1,20,000 and promised to support her minor children’s education.

The same year, in Sindumuru and Tadakallu villages in Raichur district, when the local women’s collective backed by KDMV opposed a ban on Dalits using well water, the government provided them access to the wells. In the same district but at a different location, the government approved construction of a private hospital on land occupied by Dalits, rendering them homeless. An investigation by KDMV members revealed that the offenders were unpunished.

A memorandum to the government led to the arrest of the guilty under the Karnataka Prevention of Transfer of Certain Lands Act, 1979 (sections regarding SC/ST). The Dalit land owners were then compensated and their land/homes restored to them a week later.

KDMV also assists other distressed communities in Karnataka. In 2010, when adivasis who had not received various government benefits such as family ration cards and job cards under MGNREGA etc died to due to starvation in Hunsuru taluk of Mysore district, KDMV members protested and submitted a memorandum to the local tehsildar compelling him to meet the families. The activists ensured that all the families received ration and job cards subsequently, as well as a compensation of five lakh rupees and support to build houses. 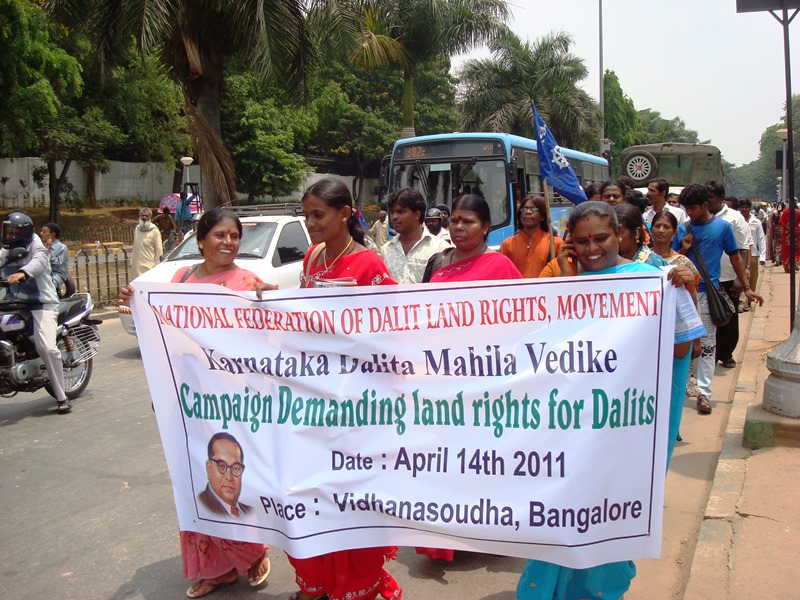 KDMV activists and allies at a rally in Bangalore in 2011. Pic courtesy: Karnataka Dalit Mahila Vedike

In 2010, some KDMV members including Yashoda and other human rights defenders in Karnataka, launched the Committee Monitoring and Strengthening Scheduled Castes and Scheduled Tribes in Karnataka (CMASK). CMASK recently released its unique annual report tracking the implementation of the crucial SC/ST PoA Act in Karnataka.

Since 2010, CMASK has been publishing reports using statistics from the crime records bureau. These show that in Karnataka, one crime was reported against the Scheduled Castes (SCs) or Scheduled Tribes (STs) every 5 hours in 2013 (1859 cases in all). Edwin, a CMASK co-founder, shares the alarming statistics of such crime:

Under the SC/ST (PoA) Rules 16(2), the state must have a State Vigilance and Monitoring Committee (SVMC) comprising the Chief Minister, Dalit ministers and MLAs, the Home Minister, the Finance Minister and the Social Welfare minister. This Committee must meet every January and July, review pertinent state and district reports and act as necessary.

Similarly, Rule 17(3) mandates that the Collector/Commissioner, Police Commissioner or a counterpart, Social Welfare Commissioner and representatives of organisations and groups monitoring the human rights situation must constitute a District Vigilance and Monitoring Committee (DVMC) that meets every three months to track the status of Dalits and Adivasis and take required action.

DVMCs must also ascertain that in incidents of atrocity against Dalits and Adivasis, the Deputy Superintendent of Police investigates and files an FIR under the SC/ST PoA Act. The Committee should ensure that 25 percent compensation is provided within the first 24 hours and that victims also receive dearness and travel allowance for court hearings. The DVMC is required to monitor the case closely and ensure 100 percent compensation before the case closes.

Though all districts have conducted at least one DVMC meeting since 2009, only Chamarajnagar, Uttara Kannada and Udupi DVMC’s met quarterly in 2013, down from six districts in 2012.

The overwhelming need for a watchdog and activist

According to the National Crime Records Bureau (NCRB) data for 2014, Karnataka has the sixth highest number of crimes against SCs (2566 of 39,408 i.e., 6.51 percent) in India, though the state ranks ninth in the country in terms of SC population.

Three ‘atrocity-prone’ districts (Bangalore, Bidar and Kolar) have zero conviction rates. Tumkur has an exclusive special court with a conviction rate of 2 percent in 2013 (1 of 44) and disposed 47 cases with just 3 convictions in 2012 and had nil convictions of 106 cases in 2011.

More cases are being registered and less ‘B’ (or closure) reports are being filed. This could mean that the police are being more vigilant and sensitive or that complaints are not being accepted or registered under the SC/ST PoA Act. The state has a high, but dwindling ‘B’ report rate (22 percent in 2011, 14 percent in 2012, 13 percent in 2013).

The above statistics are unsurprising, considering the status of the case regarding the 35 Dalit women in Chitradurga district who were sexually assaulted by dominant caste men in 2011. KDMV’s investigation revealed that their husbands did not stop the perpetrators. Further, their houses were burnt down after the activists left.

KDMV organized a protest rally and met the district collector who promised land and employment under NREGA for the poor women. While the 2 acres of agricultural land and housing were granted and the guilty were arrested, the judicial process continues.

KDMV also assists Dalits facing gender and caste discrimination, harassment and violence by providing medical help in public hospitals and legal assistance (as applicable) through its networks with human rights lawyers. It pressures the government into arresting and punishing the criminals, providing alternative livelihoods, housing, vocational skills (as necessary) and police protection (if required) to the survivors by meeting pertinent officers.

If the government responds late or unsatisfactorily, KDMV and its allied human rights defenders organise peaceful sit-ins and/or rallies until the government acts. It also tracks the status of survivors and pertinent cases by contacting affected individuals/families and through law courts and issues media releases (if necessary).

In 2013, the Karnataka government passed an Act to ensure implementation of the SC/ST sub-plan which provides for funds for the development of Dalits and Adivasis in many areas. KDMV is also involved in monitoring the SC/ST sub-plan.

“We found that the allocated amount is unsatisfactory this year. Additionally, the release of allotted sums and their utilisation is quite poor. However, very few individuals or groups question the government about this or the relentless exclusion and torture of Dalits and Adivasis. That is primarily because neither state nor society prioritises the well being or socio-economic advancement of Dalits and Adivasis. Hence, we will continue strengthening and expanding our different activities,” says the fearless and determined Yashoda.