The right to dance

Can the State impose arbitrary and varying standards of vulgarity, indecency and obscenity for different sections of society or classes of people? Flavia Agnes notes that the Mumbai High Court's verdict in the dance bar bans case strikes the right note.
25 July 2006 -

The Bombay High Court ruling upholding the right of women to earn their living by dancing in bars has come as a morale booster for many of us who have been fighting an uphill battle against extreme odds, countering thehypocritical aspects of middleclass Maharashtrian morality. For the past several months, it had seemed as if the ground under our feet was slipping away and we had only a slender hope that the judiciary would decide in our favour  given that the ban was justified as essential to 'cleanse' the city of sex and sleaze. The High Court ruling, therefore, not only came as a pleasant surprise but also offered a ray of hope for the bar dancer confined to the margins of society.

The judgement striking down the dance bar ban as unconstitutional, in the case of Indian Hotels and Restaurants Association and others Vs. the State of Maharashtra and others, was pronounced on April 12, 2006, to a packed courtroom by a division bench comprising Justices F I Rebello and Roshan Dalvi. The statute that was struck down was an amendment to the Bombay Police Act, 1951, passed by both the Houses of the Maharashtra State Legislature in July 2005. The ban came into effect on August 15, 2005, so as to coincide with the Independence Day celebrations.

The statute banning dance performances in bars had curiously allowed hotels with three stars or above as well as gymkhanas and clubs to hold such performances to 'promote culture' and 'boost tourism'. As the state celebrated the Independence Day, an estimated 75,000 girls, mainly from the lower economic strata, lost their means of livelihood. 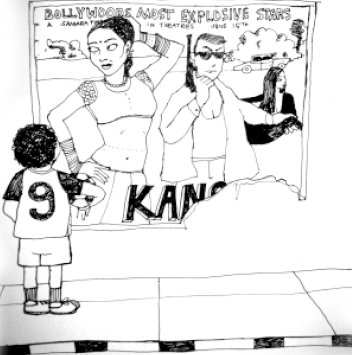 Soon thereafter, petitions were filed in the Bombay High Court challenging the Government's move by three different segments  the bar owners associations, the bar girls' union and social organisations. After months of legal battle, the High Court struck down the ban on the following grounds:

Regarding the exemption given to star hotels, gymkhanas and clubs, among others, the Court held as follows: "... the financial capacity of an individual to pay or his social status is repugnant to what the founding fathers believed when they enacted Article 14 and enshrined the immortal words, that the State shall not discriminate."

But if this was the only ground for violation of fundamental rights, then the Court could have struck down the provision granting exemption to a certain category of establishments, contained in a separate section, i.e. Section 33B1 of the amended statute. The ban could have been retained and made uniformly applicable to all establishments. But the fact that the judgement goes much beyond this and deals elaborately with yet another fundamental right seemed to have missed media attention.

The Court struck down the dance bar ban on the ground that it violates the fundamental freedom guaranteed under Article 19(1)(g) of the Constitution. This is a significant development and nearly half of the extensive 257- page judgment deals with this concern. "Are our fundamental rights so fickle that a citizen has to dance to the State's tune" is a caustic comment in the judgement. [2[ Further, the Court held:

If an item number in a Hindi film could be screened in public theatres, then how could an imitation of the same be termed vulgar?

"The State does not find it offensive to the morals or dignity of women and/or their presence in the place of public entertainment being derogatory, as long as they do not dance. The State's case for prohibiting dance in dance bars is that it is dancing which arouses the physical lust amongst the customers present. There is no arousing of lust when women serve the customers liquor or beer in the eating house, but that happens only when the women start dancing The right to dance has been recognised by the Apex Court as part of the fundamental right of speech and expression. If that be so, it will be open to a citizen to commercially benefit from the exercise of the fundamental right. This could be by a bar owner having dance performance or by bar dancers themselves using their creative talent to carry on an occupation or profession. In other words, using their skills to make a living [3].

The ban was based on two premises that were contradictory to each other. The first portrayed the bar dancers as evil and immoral, corrupting the youth and wrecking middle-class homes, hankering after easy money and amassing a fortune each night by goading innocent and gullible young men into sex and sleaze. The second one claimed that bars were in fact brothels, and bar owners traffickers who sexually exploited the girls for commercial gains. This premise refused to grant an agency to the women dancers. Rather unfortunately, both these populist premises appealed to the parochial, middle-class Maharashtrian sense of morality. What was even worse, the demand for a ban was framed within the language of 'women's liberation', and the economic disempowerment of this vulnerable class of women came to be projected as a plank that would liberate them from sexual bondage.

While the ban adversely impacted bar owners and bar dancers from the lower economic rungs, the state exempted hotels with three or more stars, clubs and gymkhanas. Those of us who opposed the ban raised some uncomfortable questions: Could the State impose arbitrary and varying standards of vulgarity, indecency and obscenity for different sections of society or classes of people? If an 'item number' in a Hindi film could be screened in public theatres, then how could an imitation of the same be termed 'vulgar'? The bar dancers imitate what they see in Indian films, television serials, fashion shows and advertisements. All these industries use the woman's body for commercial gain. There is sexual exploitation of women in these and many other industries. But no one has ever suggested that an entire industry should be shut down because there is sexual exploitation of women! Bars employ women as waitresses but the ban does not affect this category. Waitresses mingle more with the customers than the dancers, who are confined to the dance floor. And if certain bars were functioning as brothels, why were the licenses issued to them not revoked? 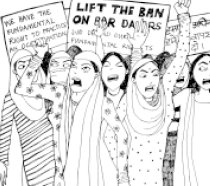 Despite us pointing out such contradictions in the stand adopted by the ruling party and the pro-ban lobby, no one was willing to listen. On August 14, 2005, at midnight, as music blared in bars packed to capacity in and around the city of Mumbai, disco lights were turned off and the dancers took their final bow and faded into oblivion.

Some left the city in search of other options, others fell by the wayside. Some became homeless. Some could no provide medical care for their ailing parents. Some had to pull their children out of school. Some were battered and bruised by drunken husbands as they were no longer bringing in money. Some put their preteen daughters out for sale in the flesh market. And some committed suicide; they remained just names in police diaries: Meena Raju, Bilquis Shahu, Kajol There were more to follow in the intervening months. A few stuck on, begging for work as waitresses in the same bars.

With the exit of the dancers, the dance bar industry came to a grinding halt. Devoid of glamour and fanfare, the profit margins plummeted and many bars closed down. Few others braved the storm and worked around the ban by transforming themselves into 'silent bars' or 'pick-up points'  slang used for the sex trade industry. Left with few options, women accepted the paltry sums thrown at them by customers to make ends meet. Groups working for prevention of HIV/AIDS sounded warning alarms about the increasing number of girls turning up for STD check-ups.

Why was the dance bar ban struck down? To understand this, we must first examine the Statement of Objects and Reasons (SOR) of the amendment. The SOR claimed the following:

The Court overruled each of these reasons stated by the Government on the ground that there was no rational nexus between the amendment and its aims and objectives. Some relevant comments from the judgement are summarised in the accompanying box.

A glaring discrepancy in the arguments put forward by the state was in the realm of the agency of women. At one level, the state and the pro-ban lobby advanced an argument that the dancers were evil women, who came to the bars to earn 'easy money' and corrupt society. This argument granted an agency to women dancers. But after the ban, the government tried to justify it on the ground of trafficking and argued that these women lack an agency and need state intervention to free them from the world of sexual depravity in which they were trapped.

Refuting the argument of trafficking, the Court commented: "No material has been brought on record from those cases that the women working in the bars were forced or lured into working in the bars. The Statement of Objects and Reasons does not so indicate this To support the charge of trafficking in order to prohibit or restrict the exercise of a fundamental right, the State had to place reliable material which was available when the amending Act was enacted or even thereafter to justify it. A Constitutional Court, in considering an act directly affecting the fundamental rights of citizens, has to look beyond narrow confines to ensure protection of those rights. In answer to the call attention motion, an admission was made by the Home Minister and it is also stated in the Statement of Objects and Reasons that young girls were going to the dance bars because of the easy money they earned and that resulted also in immoral activities. There was no mention of trafficking."9

During the entire campaign, the world of the bar dancer beyond these confines lay hidden from feminist activists who were campaigning for their cause. Only now and then would it spill over, though more as a defiant statement. So while we were exposed to one aspect of their lives with its many problems  of parenting, poverty, pain and police harassment, we must admit that this was only a partial projection, an incomplete picture. We could not enter the other world in which they are constantly negotiating their sexuality, the dizzy heights they scale while they dance draped in gorgeous chiffons studded with sequins, oozing out female erotica and enticing their patrons to part with a generous tip.

Did the problem lie with our ideas and the picture that we wanted to paint for them? Perhaps yes. But for now, as the State prepares to file its appeal in the Supreme Court, aided by the best legal minds in the country to defend its stand on sexual morality, we would be content if we are able to safeguard the advantages we gained in the Bombay High Court.

Flavia Agnes is a lawyer and women's rights activist. She is also the founder member of Majlis, a legal and cultural resource centre based in Mumbai. This article is republished in India Together from Manushi, through our Space Share program for publishers of other magazines.

BACK TO SCHOOL : Meaningful restart of education is critical
MORE ARTICLES
on similar topics ...
CULTURE