The defence services are convinced that the sixth Central Pay Commission has further downgraded the status of Indian soldiers. Maj Gen S G Vombatkere (retd) cautions that testing the patience of the Indian soldier cannot be in the best interests of the nation.

Pay scales are important to soldiers  this term includes all personnel of India's army, navy and air force  but status and honour are any day more important. The first is important to satisfy the corporal and temporal needs of the fighting man and his family, and the second is what motivates him to fight for his country and if need be, sacrifice his life. In our increasingly materialistic society, the two are inextricably linked. The way a soldier is treated by the public at large and by bureaucracy in particular when he is on duty (official interactions) and off duty (on leave, at a personal level) is a part of how the soldier understands where and how he fits into India's society. 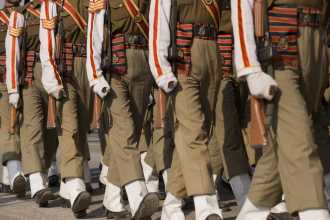 Soliders marching at a Republic Day parade in New Delhi.

The public is not, in general, sufficiently interested in the soldier to understand the reason for the rank structure, and is often ignorant of what the soldier does or the stresses and risks that he undergoes, or that 90 per cent of them retire before they are 40 years of age. And then there is the handful of people who think that the defence budget is a waste of money.

There is often no sense of parity between the rungs of the bureaucracy and defence services. A Brigadier with 24 years service having to deal with a Deputy Commissioner with half that service but equivalent pay or a bureaucrat treating the ordinary jawan, who gets paid less than a police constable, dismissively, only heightens the feeling of disparity. Public disinterest and thinly veiled bureaucratic hostility rankle in soldiers' minds, but the discipline of military training keeps the soldier silent.

Successive Central Pay Commissions (CPCs) have brought down the inter se status of all ranks of the defence services with respect to the bureaucracy and police.

The recent Sixth CPC is consistent in that respect, with yet another step downwards. For many years, the defence services have been asking that since the soldier and the ex-soldier form by far the largest chunk of all government employees and pensioners respectively, the CPC should have representation of at least one serving soldier, but the request has been routinely brushed aside. Because of the consistent degradation of the pay and status of the soldier and the lack of understanding on part of the bureaucrat, the status of senior defence services officers vis-à-vis civilian officials has been falling with every CPC. The soldier is left with no option but Yours not to reason why, yours but to do and die. All this has been borne patiently and silently by the soldier, under successive insensitive governments.

The soldier is routinely called out in his secondary role of aid to civil power for insurgency, social unrest or natural or man-made disasters, almost always because the civil administration (bureaucrats and the police under their control) has proved incompetent in its primary role. If this situation is exacerbated by degrading the soldiers' status vis-à-vis the bureaucracy and police, it cannot be viewed by the soldier as otherwise than deliberate insult.

The three Service Chiefs conveyed to the Defence Minister that the 6CPC Review Committee that went into the anomalies of soldiers' pay packages once again without defence service representation, actually heightened the anomalous situation rather than remedy it. This culminated in their stating that the implementation of the 6CPC may not be possible because of the sensibilities of soldiers constrained to silence, but this was interpreted as breach of discipline.

As reported in the Indian Express e-newspaper article on 28 September 2008, Service Chiefs back off after Antony tough talk, the Defence Minister said words to the effect that ... the armed forces cannot unilaterally decide not to implement a Union Cabinet decision and that there was no way the UPA government would let them get away with it. If the Defence Minister imagines that the 6CPC recommendations will bring cheer to the soldier for Diwali he is sadly misinformed, because it has actually further diminished soldiers' status. On the other hand, it further heightens the soldiers dismay with the manner in which his General, Admiral and Air Chief Marshal have been collectively disciplined.

The Defence Service Chiefs' acquiescence is not because they were intimidated into submission by the Defence Minister's tough talk, but because of their mature understanding of India's democracy, so as not to cause a constitutional crisis.

Veerappa Moily's off-the-cuff remark on NDTV's programme on 28 September 2008, Men in arms, Up in arms, that the soldier appears to speak about these issues only after he retires, is evidence of his ignorance of the conditions of military service that (necessarily) deny the serving soldier the right of freedom of speech and expression and freedom to form associations or unions under Article 19 (a) and (c) of the Constitution of India. He might like to cogitate on what might happen to India if, God forbid, the suggestive title of NDTV's programme came true.

Soldiers who have the experience and honour of commanding men in the risky and life-threatening circumstances of military operations understand human nature in general, and in particular of the fighting man much better than bureaucrats or politicians ensconced in their offices. It is mature understanding of human nature that a patient and silent man is not weak. Testing the patience and misinterpreting the silence of the Indian soldier with respect to the 6CPC cannot be in the best interests of the Indian nation.