In the shadow of the Narmada dam, those displaced by the canal once hoped that its water would irrigate their fields. Little did they know how their lives would turn out. Neeta Deshpande reports.
07 November 2009 -

When Devilal Tadvi of the Adivasi village of Gadkoi in Gujarat first saw the site of the Sardar Sarovar dam located about twelve kilometres from his home, a singular thought crossed his eager mind. When would the mighty Narmada water his small field? Little did he know, that not only would he get no water from the dam in the future, but that he wouldn't have much agricultural land left either.

Devilal's father Jatanbhai had already lost seven and a half acres to the dam's main canal in the early eighties. With only four acres left over that was partitioned between Jatanbhai and his four sons, Devilal's share was less than an acre. Though Gujarat Government officials promised the family adequate cash compensation when they acquired the land, they soon reneged on their sugar-coated assurances. Eventually, Jatanbhai was paid a meagre Rs.2800 an acre, impoverishing him with a stroke of a pen, for life.

Government officials also promised that all four of his sons would be employed, but only one son was hired as a clerk in a State Bank branch in the colony built for dam engineers and staff. Now Devilal was forced to work as a labourer on other people's farms, pulling out weeds all day for a tiny payment. When dry, merciless summers arrived, he had to leave home for Surat, to sweat and slog at construction sites in inhospitable conditions. But he still had hope that the Government would compensate his family for the land it had so unjustly usurped, that it would provide them Narmada waters to irrigate the fields which buttressed their lives. The compensation money never came. Nor did the water. 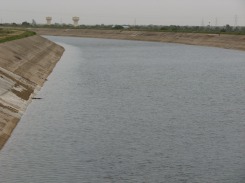 Devilal, who would have been a farmer in his own right, was forced into a life of labour to profit others, leaving him to struggle for the basic necessities of life. (Photo: The main canal of the Sardar Sarovar dam.)

Jatanbhai is one of thousands of farmers who lost land to the canal network of the dam, much touted as Gujarat's lifeline. The 1992 report of the Independent Review commissioned by the World Bank - which initially sanctioned a loan of $450 million for the Sardar Sarovar Projects (SSP) - puts the figure of land-owning farmers with titles who would become landless or be left with less than two hectares, at about 14,000. The report further states that based on discussions with affected families, in many regions, one title holder is equal to three or four families.

Yet, despite being uprooted from their fields, these farmers were not recognized as project-affected, and thus, not even entitled to resettlement. Instead, their lands were acquired under the Land Acquisition Act at ridiculously low rates, steeping their lives in penury for generations to come.

Jatanbhai tells the story of his loss with a straight face. His voice is calm, his words matter-of-fact: "Only when I saw them measuring other fields in the area, I found out that I'd lose mine too. They cut my standing groundnut crop. We had to feed it to our livestock. They said they'd compensate me. But they never did. After I signed the papers, the police warned me not to go to my field. What could I have done? They'd already started digging up my land with a bulldozer. Should I have sat with my head in my hands and cried?"

While lands in his area were being measured for acquisition, Jatanbhai was struck by another grave tragedy. When his sister-in-law underwent a tubectomy, his wife decided to follow suit. After asking her husband's permission, she boarded a motor vehicle for the Government hospital some 25 kilometres away. She was given an injection for anesthesia, says Jatanbhai, after which she passed away. Did he ask the doctor what happened? "The doctor had no explanation", he replies. "He only said: nasha ho gaya." Soon after, Jatanbhai pulled his children out of school, and resolved to bring them up without a mother's care. At the time, his youngest son was only three.

When he lost his mother, Devilal - the third son - was still in the seventh standard. Today, his eyes reflect his emotions when he recalls his school days. "I never had new clothes or books. Through my schooling, I wore my older brother's clothes, read from his used textbooks. We never had enough money for food, leave alone clothes. And when my father couldn't manage the expenses anymore, what option did I have? My classmates from better families continued to study, and secured jobs, as teachers, clerks or nurses. But I couldn't ..." he trails off.

Devilal, who would have been a farmer in his own right, was now forced into a life of labour to profit others, leaving him to struggle for the basic necessities of life. When agricultural work was unavailable during the summer months, he had no choice but to leave his village in a desperate bid to find work, any work. The only employment that came his way: the inhuman grind of a construction labourer. He prepared cement mixture for plastering walls, sprinkled water over buildings, lifted unbearably heavy bags of cement - the lot of an animal of burden.

His contractors would not allow him to sleep in the buildings he built for fear of theft, so he had to make the adverse footpaths his home for the nights. "My fingers had injuries", he remembers, "and the contractor would abuse me with insulting words. Arranging food was difficult, and I've had to go hungry for a day or two. My life has been very difficult. But if I don't suffer, how will my children eat?"

A few years down the line, Devilal was afflicted by a severe attack of malaria. The disease took its toll - he was ill for an entire six months. He vowed never to return to the city again. Later in 1984, he applied to the same Government Hospital where his mother had died a most unfortunate death, for a job as a nurse. He was selected, but an official kept his order pending for two months. Then, as expected, the official demanded a bribe: a thousand rupees. Devilal went from one relative to another in a desperate attempt to borrow money. When he failed to raise it, his competitor secured the position.

His brother's application for the position of a security guard in the Secretariat at Gandhinagar also fell through. The people in charge hired their relatives, and Devilal's brother, without any connections in the right places, didn't even stand a chance.

Later in the mid-eighties, Devilal took up work in an office of Jaiprakash Associates, contractors for the very dam which had uprooted him from his ancestral livelihood. For twelve years, he swept and mopped their office, and served water and tea to the staff who built the dam that had ruined him for good. He was paid Rs.22 a day. How did he manage household expenses? "You have to eat less", he answers simply. "Grain, tea and oil cost money." This from a man, whose family at one time lived off their own land.

When asked, he animatedly lists nine different crops his father once used to grow. Now Devilal can only grow tur and maize. How did he feel having to sweep and mop floors dirtied by others? "I had to", he replies without hesitation. "What else could I have done?"

Unable to make ends meet with twenty-two rupees a day, Devilal and other employees formed a union, and in the early nineties, demanded a raise. For an entire month, the workers went without wages, waiting patiently for a fair recompense. But life had a cruel twist in store which they could never have imagined. The leader of their union was bribed. The organisation fell apart. Devilal went back to work, serving tea with a straight face. Five years later, he was told there was no work for him. "Sab labour ki chutti kar di", he says. "Kam hi nahin tha."

Back to removing weeds on other people's farms, Devilal now earns a meagre Rs.30 a day for nine hours of exhausting labour. "Everything is so expensive", he complains. "A kilo of oil costs eighty rupees, a kilo of rice costs sixteen. There are six people to eat in my house, with my wife and four daughters. I'm the only one who earns. If I'm late by an hour because of household difficulties or rains, my employer sends me back home. What can I do? I live a very tough life."

Despite the tremendous odds, Devilal is confident that he will manage to survive, a skill he has learnt the hard way. What is eating at him though, is the question of his daughters' future. The responsibility of their marriages weighs heavily on his mind today. Each wedding will cost about half a lakh of rupees, he explains. With less than one acre of land, how is he to raise such a large amount? He has no choice but to mortgage his land for Rs.20,000.

And then, despite his resolute decision, it would be time again for him to return to the city he had fled, this time taking his wife along with him. The couple would have to leave their daughters behind, perhaps at the house of a relative, where they could labour on farms to survive. Taking his young daughters to the city is not safe, he knows. If he earns enough, it would still take him several years to pay back his mortgage.

The risk of losing his only acre of land, along with a life of back-breaking, dehumanising labour, stares Devilal in the face today. His only hope: compensation for the land that was commandeered from him so brutally, and water from the spectacular dam to quench his leftover field. With neither possibility in sight, Devilal must return to a city which glitters with a million lights, yet leaves his life condemned to darkness.

Neeta Deshpande is a freelance writer based in Bangalore. This article is part of a series on uprootment and survival in the Narmada valley. Names of persons in this article have been changed.