Despite numerous development plans and programs implemented since Independence, the tribals of our nation remain the most marginalised group. Abhijit Mohanty examines the Tribal Sub Plan funds and what's happening with them.

Around 8.2 percent of Indian population belongs to the Scheduled Tribes (STs) communities. After 68 years of independence, they are still the poorest and most marginalised group. Today 47.4 per cent of the STs in the rural areas are below the poverty line, households covered by a health scheme are merely 2.6 per cent, 68.5 per cent of tribal women are anaemic, only 19.7 per cent have access to clean and potable water, literacy rate is 58.9 per cent and the child mortality rate remains at 35.8 per cent.

In 1974-75 during the 5th Five-Year Plan, a Tribal Sub Plan (TSP) was initiated by the government of India. As per the Planning Commission guidelines, the broad objectives of the TSP were to ensure the share of state plan resources spent for the benefits of STs to be in proportion to their population in the state, a substantial reduction in poverty and unemployment among STs, creation of productive assets in favour of STs through sustainable development efforts, human resource development through adequate educational services, and provision of physical and financial security against all types of exploitation.

However, several research studies have shown that the implementation of TSP has been not taken up either in the spirit or the letter of the law.

Ministry of Tribal Affairs (MoTA) which is the nodal agency for the implementation of TSP at the national level has admitted that the impact of TSP is far from being satisfactory. The prominent reasons for underperformance of TSP as identified by an evaluation study that Planning Commission got conducted by a third party were:

Status of TSP in Odisha

The Schedule Areas in the state are spread over 69403.11 square kilometres covering 13 districts and constitute 44.71% of total area of state. Among 13 districts, 7 districts namely Koraput, Nabarangpur, Rayagada, Malkangiri, Sundargarh, Mayurbhanj, and Kandhamal are complete Schedule Areas and other 6 districts such as Gajapati, Ganjam, Sambalpur, Kendujhar, Kalahandi, and Balasore come under partial Schedule Areas.

Whereas, the TSP area in the state is spread over 68896.3 square kilometres in 12 districts which constitute 44.21% of total area of the state. Total TSP area includes 21 ITDAs, 17 Micro Projects, 46 Modified Area Development Approach(MADA) pockets and 14 Cluster Approach Pockets in the state.

In Odisha TSP gets funds from sources like:
i. The state plan
ii. The central sector and centrally sponsored schemes
iii. Special Central Assistance (SCA) to TSP
iv. Institutional finance

Odisha is not following single demand budget. The outlay for TSP is being budgeted under different department’s demands under the minor head - Tribal Area Sub-Plan. All the departments of the state allocating funds and the expenditure approved towards tribal development are accounted under this budget head.

The state government is following the divisible and non-divisible concept for allocating funds towards TSP in their annual plans and Five-Year Plans. Every year, ITDAs receive funds under Special Central Assistance (SCA) towards TSP. The funds are then allocated to various sub heads of ITDA like Agriculture, Horticulture, Skill Up-gradation and Vocational Education, SHG approach, Credit and Subsidy, SCA irrigation, SCA infrastructure etc.

In Odisha, there are 40 Administrative departments like Panchayati Raj, Women and Child Development, Rural Development, Agriculture, ITDA and many others which receive funds under TSP on a regular basis every year. As per the guidelines of TSP, each department should get proportional amount of TSP funds according to the proportion of the tribal population of the state. Also, the departments which have direct impact on the development of the tribals should get funds under the TSP.

But, there are several instances where allocation of TSP funds was done to departments which have zero or least impact on the tribal communities. Like Home and Industry department which received Rs. 21.43 and 10.79 crores respectively during the year 2010. Similarly in 2011, Rs 16.92 and Rs17.97 crores were sanctioned to these departments respectively.

Planning Commission guidelines clearly state that TSP funds are non-divertible. Yet, the Odisha state government diverted Rs 6 and Rs 5 Crores of TSP funds for construction of a Flyover at Rajmahal Square in Bhubaneswar, and improvement of the Daya Canal on the city outskirt respectively. 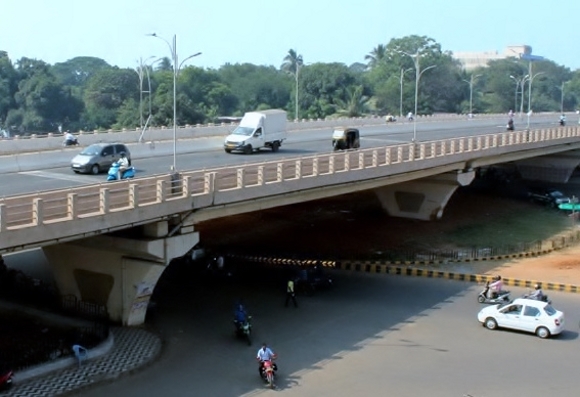 The Comptroller and Auditor General recorded this large scale diversion of funds from TSP to other projects describing it as highly irregular and completely inadmissible, recommending a thorough investigation into this massive lapse in the budgetary control mechanism. Regrettably, to date nothing has been done in this regard.

Moreover, TSP funds have also been diverted to schemes like modernisation of police barracks, residential buildings for police through the Odisha State Police Housing and Welfare Corporation, even special funds were allocated for police training. And, the tribal communities were simply unaware of this diversion by the state government.

An attempt was made to know the fund flow pattern of TSP under its Plan and Non-Plan head in the Scheduled and Non-Scheduled areas. It was only after a review and thorough analysis of the Annual Reports of 2008 to 2011 of the Scheduled Tribe (ST) and Scheduled Caste (SC) Development and Welfare Department, it was revealed that districts which comes under Non-Scheduled areas like Nayagarh, Angul and Cuttack are receiving regular TSP funds under the Non-Plan head. During 2008-09, Nayagarh, Angul and Cuttack received Rs 150, Rs 110, and Rs 150 lakhs under the Non-Plan head of TSP.

According to the Planning Commission guidelines, the Tribal Welfare Department is the nodal agency for the formulation and implementation of the TSP in the states. But, the ST & SC Development and Welfare Department of Odisha has miserably failed to achieve its TSP objectives. There is no representation of tribals in TSP Monitoring Committees. As a result, the tribal communities are not able to represent their issues, concerns and suggestions for  effective implementation of the TSP activities.

To date there is no TSP legislation in the state which can hold anyone accountable for any failures. 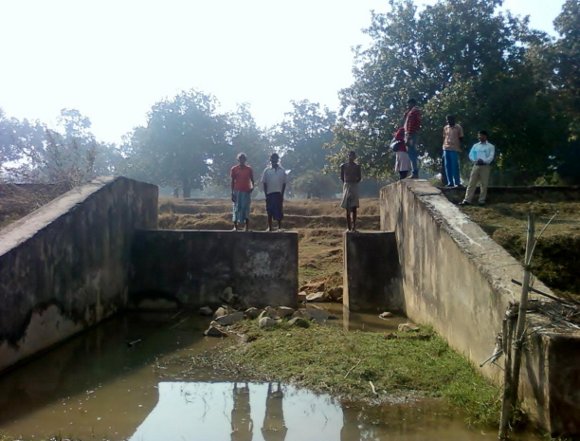 Issues at the grassroots level

Khudisila is a tribal village of Jarak panchayat in Thakurmunda block under Mayurbhanj district. Here, during 2009-10, a Diversion Weir (D/W) was constructed with the support of ITDA under SCA to TSP. A total of Rs 800000/- was sanctioned for the work order. But, according to the villagers, they were not consulted before the construction work. Some community leaders voluntarily suggested constructing the D/W at Makapadar which has potential of irrigating around 50 acres of agricultural land. But, the officials did not pay any attention to their suggestion and constructed the D/W at Kiayanala which can irrigate only 20 acres. And till today there is no sub gate and canal gate in the D/W.

Similarly, in Kalakada village of Patbil panchayat in Karanjia block, a check dam, estimated cost Rs 500000, was sanctioned by the ITDA in 2010-11. Here too the villagers were not consulted prior to the construction of the check dam. The villagers complained that there is a more suitable place for a check dam which could have irrigated more than 40 acres, whereas now it can irrigate only 15 acres. The worst part is, till today the check dam is not completed. 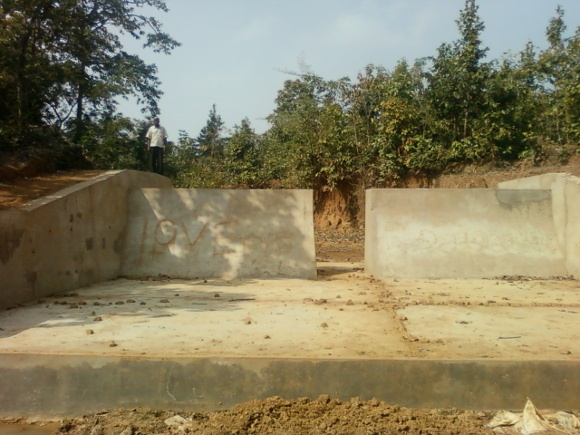 The lack of awareness and ignorance of the community about TSP, helps unscrupulous officials and contractors in hijacking TSP funds.

Take Dangadhia village of Champajhar panchayat located in the Similipal Biosphere and Tiger Reserve in the district. According to the Annual Report of ITDA, during the period of 2009-10, a check dam of estimated cost Rs 1000000 was sanctioned and 100 percent of utilisation of the fund is shown. But no such check dam exists, villagers say. A similar case is also noticed in Pulandi village of Tudipaju panchayat in Phulbani block under Kandhamal district. Here, during the period of 2009-10, a Diversion Weir with cost estimated at Rs. 800000/- was sanctioned by the ITDA. But, according to the villagers no such D/W was ever constructed.

Thus, it is quite clear that despite various projects funded under TSP, there is hardly any perceptible impact on the tribal communities. The views, planning and indigenous knowledge of the community are not taken into due consideration in the implementation of projects. TSP funds are specially meant for the development of the tribals, but they get the minimal benefit and it is the contractor and the vested interest groups who benefit the most.

In order to ensure transparency and accountability in effective implementation of  TSP, a single line administration is required. The state government has to undertake awareness programmes, and camps on TSP in a mission mode at grassroot level. The present top-down approach of planning has to be replaced with promoting local perspective planning based on a need based approach.

This will enable active community participation in decision making process of the TSP activities. There should be enough representation of tribal communities in the TSP Monitoring Committee at the state level. Most importantly,  the guidelines of the Planning Commission on TSP have to be strictly followed by the state government, there should not be any diversion.

The author is associated with Agragamee and writes on tribal development issues.