The narcissism of the neurotic

The Commonwealth Games were no showcase, but a mirror of India 2010. If they presented anything, it was Indian crony, casino capitalism at its most vigorous, writes P Sainath.
19 October 2010 -

The Commonwealth Games over, we can now return to those of everyday Indian life. For all the protests, though, there was nothing in the corruption that marked the Games that does not permeate every town and city, all the time. Just that, in these Games, it got concentrated in one very high-profile event, under constant public and media gaze. Much of the agonising - over what was routine corruption - was occasioned by "what the world will think of us." For 'world' read Western world. We care little about what Tuvalu or Tonga or Papua New Guinea think of us.

The corruption - or its public manifestation - hurt us because it messed with our self-image and our need to be accepted as special by the Western elite, in every way, even at sports. After all, we are knocking at the door of the G-8. Else, there were no surprises in the corruption. Shocking, yes. Surprising, no. Dirty contracts handed out to sleazy builders? That's business as usual in Mumbai, any day in the past three decades. Most of the city's 36 MLAs are builders or contractors, which is its own comment.

Shoddy construction? Footbridges that collapse? We figured out how flimsy were the buildings in Gujarat's cities after the 2000 quake. Yet we continue to build huge high-rises in high seismic zones - because there's money in that. It was logical for the authorities to say of the collapsed footbridge in Delhi that - it was meant for ordinary citizens, not athletes. (Read: It's okay if ordinary citizens fall off it.)

Kickbacks for the boys? Conflict of interest? You're more likely to win the lottery than find the citizen surprised by these. Appropriation of the resources of the public, particularly of poor people? Well, Maharashtra shows you how. You can grab adivasi land - inalienable in law - for your private city and hill station. The Revenue Minister will "regularise" these violations for you. Contrast this with the daily struggle of people in Mumbai's slums for 'regularisation.' Their massive contribution to the city's economy counts for nothing. 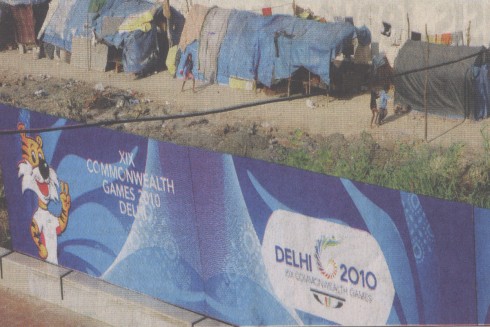 Ostensibly promoting the events, many of the signs were actually meant to hide the real Delhi from tourists' eyes.

Shady banking and money transfer practices? The Enforcement Directorate has traced slush accounts involving IPL-linked entities to perhaps a dozen countries. Overpricing for car hire, for catering, for other services - all staples of Indian life. And speaking of contracts and food, it's begun with the ICDS. Watch how midday meals, too, will steadily move from the hands of SHGs to those of private corporations in the name of "pre-mix" packages. Even as India falls to rank 67 (out of 84 nations) in IFPRI's Global Hunger Index of 2010. A rank driven by high levels of underweight children. As the GHI report tells us: "India is home to 42 per cent of the world's underweight children and 31 per cent of its stunted children."

Lying about objectives? Like saying the Games residential area would later become university hostels? When in fact several hostels were emptied during the Games (partly because of the water crisis the event entailed). And when the flats are being organised for sale, with prices already in crores. Well, low-cost housing was the excuse used during the 1982 Asiad. And we know who lives in Khelgaon now.

There are those who see the Games as a 'Triumph' of the Private Sector and a Public Sector failure. Facts count for little in matters of Faith. Who messed up the Metro Line? Public Sector. Who built the crumbling village? DDA. In truth: that sector of the Delhi Metro which did not get completed in time for the Games was the only line (probably the most profitable) that was privatised. And the giant private corporation failed to deliver. The Games village was not built by the DDA, but by a private entity. In any case, it's simple: every single private scam and racket of our time is introduced through government, in the name of the poor.

Displacement of people in and around The Games areas? Find a city, town, urban periphery or rural region where this is not an everyday fact of life. At any given moment, millions of footloose migrant labourers wander across the country, quite unsure about where the next meal comes from. Throwing out construction labourers when our work - their labour - was done in Delhi? Tens of thousands of migrant labourers, whether the Oriyas from Ganjam in Surat, or the migrants in Tirupur (owed backwages for months), or millions of others, experience this all the time. Contrast this attitude with this week's good news - the anxiety and joy over the rescue of the Chilean miners, also in a society beset by problems.

A cheering elite, telling us how wonderful we are and how we have "showcased Indian talent for the 'World'?" You can find that in most Indian newspapers or channels any day, any time. "India has showcased for the world," declaimed one television anchor, "that we can and have and always will in the future organise and run world class events." Let alone not looking beyond the world of the White and the western, what millions of Indians, including those thousands adversely affected by The Games, think, bothers us not a whit.

Another TV channel ran a programme on "What makes Indians world-beaters?" This, about India's win over an Australian cricket team that has lost Adam Gilchrist, Shane Warne, Glen McGrath and Matthew Hayden. Interestingly, all the panelists gently dissented from the proposition that we could call ourselves world-beaters. That in no way fazed the anchor, though.

Bad conditions? Athletes attending state and district level sporting meets have slept in disused railway wagons, and worse. These Games, anyway, were more about commerce and elite ego than about the athletes or their performance. The fine showing of some athletes came despite their organisers and sports bodies, not because of them. Now, they return to the bondage of bodies driven by profit, corruption and greed.

It's another matter we should never have organised this 'mega-event.' In all cities holding such events over the past four decades, a tiny elite has made billions. The city has gone bankrupt - and ordinary people then pay the bills. Los Angeles is a good example. The 'City' (i.e. Big Business) made huge profits. Residents paid the price for years afterwards. As did people in Montreal. As will those in London after the next Olympics there. Imagine, instead, if we had spent our billions on having playgrounds in all our schools? That way, you would really widen the sporting gene pool.

The point simply, is this: The Commonwealth Games were no showcase, but a mirror of India 2010. If they showcased anything, they showcased Indian crony, casino capitalism at its most vigorous. To build such a society and then expect The Games won't reflect its warts and sores is high optimism. But never in our history have an elite been so in love with themselves, so soaked in narcissism; so anxious about what 'the World' thinks. So contemptuous of what our own people think, about anything. (Though the Commonwealth wouldn't exist without them. Indians account for over 55 per cent of all people in the Commonwealth.)

There is one anomaly, though, where the Games do not typify the Indian model. The Minister of Sports, shortcomings aside, is a person of integrity (as was his outspoken predecessor). He tried cleaning up various sporting bodies and was humiliated for it. He tried curbing the number of years a person could head a sporting body. Some, in their seventies, have been around decades (a couple in their eighties, too). That bombed, as well.

On the other hand, the OC was about Organised Cronyism. Many of the tactics by which sporting bodies are run originate in Maharashtra. Sporting-politicians from there have headed more associations than they can count. Everything from kho kho and kabbadi, to wrestling and cricket. In some senses, the Games reflect the national expansion of the Maharashtra model. It's the way this state runs its cooperatives, their banks, its education. The Games, like Maharashtra, were a snapshot of primitive accumulation at work.

Meanwhile, may we suggest a modest alternative to Rahman's theme song: Jeeyo, Utho, Badho, Jeeto (Live, Get up and ready, march forward, win)? It didn't click too well, compelling the maestro to return to his Jai Ho from Slumdog Millionaire at the opening ceremony. There is some irony in that. That film outraged the same Indian elite and India Shining crowd. Leading Bollywood personalities spoke and blogged on how it had upset them. Yet the song found greater acceptance. It won an Oscar - showcasing us to the 'world' - and that overrode disquiet about the film.

Fact is: Jeeyo, Utho, Badho, Jeeto didn't quite grab us. So how about: Jaao, Loot-oh, Utho, Bagho? (Go ahead, loot, get up and scoot).