Women lead the way in eco-conservation

Women in the Sunderbans region of West Bengal are setting a trend in climate change mitigation through projects under the "Common Property Resource" initiative, and carving new frontiers in livelihood security in the process. Ajitha Menon reports.

The long green stretch of embankment along the river Gobadia under Ramganga gram panchayat in South 24 Parganas district is a sight for sore eyes. Coconut and neem trees sway to the sea breeze wafting across the river in the estuarine Sunderbans in tandem with the sundari, bakphul and minjiri trees sighing in unison with the tall areca nut plants.

Under their cool shade sit a group of women belonging to the Nivedita Self Help Group (SHG), who manage this green stretch as a common property resource (CPR), a climate change mitigation measure perceived as essential in disaster prone areas. "We had to literally wage a war for this privilege," says Aparna Das, 29, adding, "after the irrigation department made the embankment, our SHG was motivated by the Development Research Communication and Services Centre (DRCSC) volunteers to take over this unused area for plantation as a CPR, but there was lot of opposition from local residents who thought they would lose the frontage of their river-facing land or homes."

The CPR project was initiated by the DRCSC - a non-government development organisation working in 12 districts of West Bengal to strengthen livelihood security of the rural poor through sustainable management of natural resources. The project involves training local communities in disaster prone areas to map land and water resources around their villages and identify unused/underused land and water bodies and obtain consent from local authorities or private owners for utilisation rights over them through lease or rental arrangements.

The women get fodder for their cattle from this common property and food for their families from plants like bakphul or coconut. They rustle homemade remedies for cold, itches, scratches and small wounds, using produce from trees that have medicinal properties. And of course, these trees on the embankment are a natural way to prevent soil erosion and reduce carbon emission.

•  Witness to a changing world
•  Of cows and men

For the 12-odd women of Nivedita SHG, it was an uphill task to convince the panchayat and the villagers to agree to a rental arrangement for the 2,000 feet stretch of land along the embankment. "There were even minor incidents of violence against us when we were canvassing for the land four years ago," recalls Geeta Das, 23, "but we prevailed. The Area Resource Training Centre (ARTC) supplied us with seeds and saplings. We did the planting and sowing, took care of the growing trees and now we protect them ourselves. This common property resource has emerged as a lifesaver for us."

4000 trees of 31 different varieties, including sundari . from which the Sunderbans derives its name . coconut, neem, gewa, goran, keora, baen, bakphul, minjiri, areca, and so on, have been planted by the women. "Earlier, we collected fuelwood from the forest with the risk of being attacked by a tiger but now we get about eight quintal and forty kilograms of firewood from these trees . collected twice a year and shared equally," points out Jharna Das, 36, another group member.

The women also get fodder for their cattle from this common property and food for their families from plants like bakphul or coconut. They rustle homemade remedies for cold, itches, scratches and small wounds, using produce from trees like neem, which have medicinal properties. "And of course, these trees on the embankment are a natural way to prevent soil erosion and reduce carbon emission," adds Bulu Mondal, 27.

According to Engendering the climate for change: Policies and practices for gender-just adaptation, a paper published in 2011 by Alternative Futures and the Heinrich Boll Foundation, "Women are typically responsible for providing their household with water, food, fodder and firewood and they are less likely to have the education, opportunities, authority and resources they need to adapt to climate impacts. Socio-cultural access water, fuel wood, fodder and food, thereby reducing time to participate in income generating activities or in decision-making groups".

These women have now learned to liaison with the panchayat members, participate in group discussions with villagers on matters of social, financial and environmental significance like leasing the embankment land as a CPR and increased their livelihood assets significantly.

Four-five SHGs are running CPR projects on the riverside land under three gram panchayats in Patharpratima and Hingalgunj blocks and one gram panchayat in Basanti block in the Sunderbans over the last five years. "The villagers who laughed at our efforts now come to enjoy the greenery and admit that we are doing a great job to prevent soil erosion and strengthen the embankment." 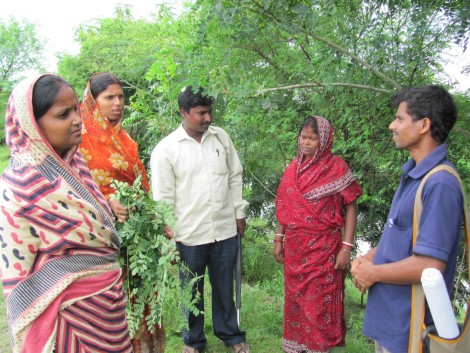 Women in their CPR area with the ARTC workers.
Credit: Subhrajit Dutta Mallick\WFS

"They also acknowledge that we made a sound financial deal besides ensuring seasonal fuel wood, fruits and fodder for cattle," remarks Madhuri Pradhan, 42, of Sarada SHG from Brojaballavpur village, adding, "This has also given us time to participate in the Swarnajayanti Gram Swarojgar Yojana (SGSY) projects with renewed vigour." The SGSY is an initiative of the Government of India to provide sustainable income to poor people living in rural areas looking at self-employment projects through the SHGs.

"Under the CPR project, we also enter into an agreement with the panchayats for selling the timber from these trees for making furniture and boats. We get a 75 per cent share while the panchayat gets 25 per cent," informs Shyamali Sathpathy, 32, of Sarada SHG.

The lease agreement is usually done for 20-25 years, with cutting of trees on maturity and replantation or growth from the stumps happening in cycles. Just a normal lease agreement is signed between the gram panchayats and the groups and it does not come under the purview of the land, pond or forest acts, according to Chandrani Das, a DRCSC worker, who adds that these agreements come by after long negotiations between the SHGs, local government authorities and villagers.

For the last 15 years, the DRCSC has been running CPR projects involving 40 SHGs in Birbhum district, where low rainfall and depletion of ground water levels is a cause for concern. There have been several examples of SHGs donating Rs 60,000 . Rs 120,000 for community development programmes from their share of the timber sales, says Chandrani.

The aftermath of Cyclone Aila in 2009 saw a massive fuel wood, food and fodder crisis. Learning a lesson from that calamity, 28 women belonging to the MaaTara and Fatima SHGs in Gobindpur village in the Sunderbans started a CPR project on the banks of Kerjan creek river and planted several varieties of saline resistant, agro-eco specific trees, shrubs and grass, including bani, vara, tara and garan. Today, these women from the scheduled tribes and minority community are reaping the benefits in the form of easy access to fodder, fuel wood and food and look forward to the time when they will be able to sell the first lot of the timber for profit.

The common property resource projects related to food, forest, mangrove plantation or pond sharing have thus had a manifold effect on climate change adaptation with women and children now having to spend less time hunting for fodder, firewood or water. Many women's groups are now growing tree saplings and selling seeds and saplings. The growing trees provide shelter to many types of birds, small animals and pollinating insects, creating small biodiversity areas. From an environmental point of view, the activity has controlled soil erosion considerably and the woodlots act as barrier against storms or floods, reducing damage to crops.