The trail of a disappearing culture

Sunanda Bhat’s award-winning Have You Seen The Arana is deeply relevant in today’s world, as it explores the deep connectedness between man and nature, and the struggle of little-known people to preserve it in the face of many onslaughts. Shoma A Chatterji reviews the film.

Wayanad District which lies on the north-east of Kerala was formed as the 12th district of the state, carved out of Kozhikode and Kannur. If one looks at the etymology of the word Wayanad, it comes from Vayal meaning ‘paddy’ and Naad meaning ‘land.’ This translates to ‘land of the paddy fields.’

Wayanad is positioned against the backdrop of the picturesque hills of the Western Ghats with altitudes ranging between 700 and 2100 meters above sea level. The district is unique culturally, ethnographically and in diversity of lifestyles, because it consists of a large population of aboriginal tribes consisting of Paniyas, Kurumas, Adiyars, Kurchiyas, Ooralis, Kadans and Kattunaikkans who own land, as well as the other tribes who toil as labourers. Wayanad accounts for 36 per cent of the total adivasi population in the districts of Kerala.

These indigenous tribes represent rich repositories of knowledge in conventional forms of rice cultivation, how to extract medicine from the forests in the area, the use of these medicinal herbs, roots, branches, plants and so on. This forms the setting of Sunanda Bhat’s Have You Seen The Arana, a brilliant documentary that sheds light on how little-known indigenous people are striving to preserve the rich natural features and elements of the environment they live and work in.

Produced by Sunanda Bhat under her production banner “Songline Films”, Have You Seen The Arana won the Golden Conch at the 2014 Mumbai International Film Festival in the above-40-minutes category. The John Abraham Documentary Award also went to this film.

As the citation revealed, this was for “its extraordinarily compassionate understanding of the harmony between nature and man and the imminent danger of its destruction. This documentary is remarkable also for its restrained yet humane exposition.”

Exploring the relations between man and nature

Sunanda first visited Wayanad in 2006 to understand the effects of an ongoing agricultural crisis on landless labour. A period of intense research unfolded stories of exploitation and struggle. As she got more and more involved with her subject that covered the local tribal communities in different parts of the district, a new picture began to emerge. Sunanda began to appreciate an incredibly vibrant landscape that sustains in spite of rapid mutations in the name of development.

In her own words, “Inspired by P Sainath’s articles on the agricultural crisis in Wayanad, I initially started out by wanting to make a film on the adivasis working in ginger plantations in Karnataka. Those were mainly stories of exploitation and abuse. I realised that I was going to be representing them in the same way as most of mainstream media does, as an exploited and helpless lot. So I started examining the way I was ‘looking’ at them.”

In the course of her research, she met a number of people who knew a lot about the land and were willing to share it readily. “These were very ‘ordinary’ people who did not get their due recognition in society. Why couldn’t I make a film on these ‘ordinary’ people who had such a special relationship with the land? That is when the film fell into place,” adds Sunanda.

Thus, one finds real stories of courage, determination and focus juxtaposed against the rise in farmer suicides due to poverty, use of chemical fertilisers and rapid loss of cultivable land. The contradictions between the positive and the negative, the real conflict between beauty and ugliness brings across how little we know about what is happening in other parts of our country.

Interwoven with the lives and tales of these people, are the legends and myths that sustain the indigenous people of the region. The Arana is at once a myth that sustains through ballads and a state of mind among kids of the locale, nurtured through years of storytelling, instilling in them the fear that the Arana is dangerous and one bite can kill you instantly.

No one visualises what the Arana is all about and no one ever will. No one knows whether it is an animal, a human being, a super-human, or a reptile. It is like a metaphorical or rather, an ideological question that both dogs and sustains the people of the land. But it lives on in the lives and minds of the people of Wayanad brought across beautifully by Sunanda in this film.

The pulapattu or the ‘song for the dead’ runs like a thread throughout the film, sung in the hope that the souls of the dead will find their way back to their ancestors.

Then there is the story of Ithi and Achan – yet another enduring legend of how the Sun and Moon Gods make their forms out of mud and as they go to the riverbed they come face to face with the terrifying form of Mali (equivalent of Kali) bathed in slush and mud. As Mali shakes it off, the hills and forests are formed and when she rushes towards the couple, they scream and run.

“The creation myth that weaves itself through contemporary narratives was told to me by friends right in the beginning. It was an amazing story that not only represented the journey of a tribe through this land but was also a story of life and death. The myth was extremely difficult to bring into the film, both in terms of filming it and weaving it seamlessly into the stories. Often we wondered whether to let go of it, if it was complicating the narratives. But we hung onto it and I believe that it gives the audience a deeper understanding of the issues in the region,” says the filmmaker.

The stories within the story

Sunanda's approach to her subject was also guided by the strong inspiration that she derives from the words of David McDougall, an ethnographic filmmaker: “Before films become a form of representing, they are a form of looking – with a certain interest, with a certain will. To look carefully requires strength, calmness and affection. The affection cannot be in the abstract, it must be an affection of the senses.”

It is this imprint on the senses that makes Have You Seen the Arana shocking in its impact as it underscores, much like a repeated punctuation mark in a long story, how excessive use of chemical fertilizers has killed Nature. Caught in this ambience, there are people who are constantly struggling against the intrusion of modern technology and fertilisers to sustain their original lifestyles.

Raman Cheruvayil is one among them, who belongs to the Kurchya tribe known for their knowledge of traditional rice cultivation. Along with wife Geetha he collaborates with NGOs to grow and preserve over 30 varieties of indigenous species of rice. He holds workshops for children on a regular basis to share his knowledge of traditional farming with them. He lives with his family in Kammana in Manathavady, Wayanad.

Raman recently bagged the P.V. Thampy Endowment Award for his work in the field of traditional farming. The camera catches candid shots of Raman with his small grandson who insists on accompanying him to the fields to root out crabs, because crabs divert the water supply or suck it up and the lands become dry.

M P Kalan is a moopan or elder belonging to the Adiya tribe. He is one of the few remaining tribals who can sing the pulapattu, normally performed as part of the rituals for the dead. He lives with his son in Thrisseri, Wayanad.

N P Jochi, a middle-aged woman with an ever-smiling demeanour, belongs to the Adiya tribe. She is a traditional healer and part of a local initiative that protects and regenerates disappearing medicinal plant species from the evergreen forests of North Wayanad. 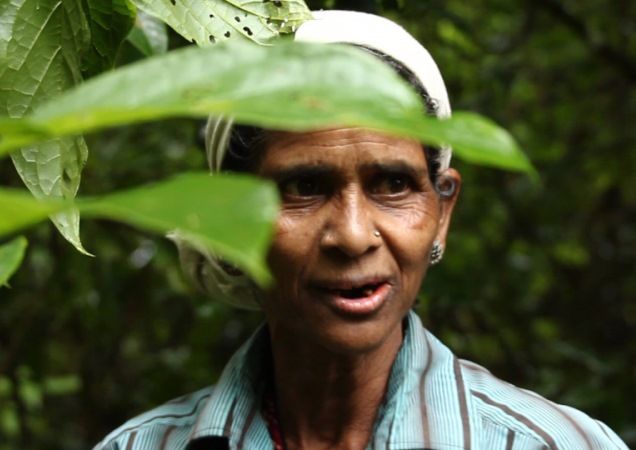 N P Jochi is deeply concerned over the disappearance of medicinal plants from the forest consequent to thriving tourism. Pic: Sunanda Bhatt

“I got interested in herbs and plants when as a child, I accompanied my father, a healer, to the forests. I have seen the rapid spread of tourism in this region which has had a very negative impact on the natural habitats of plants and herbs,” she says. Along with a local schoolteacher she has garnered the support of tribal communities in Thirunelli to protect the forests against tourist influx.

Yet another character is George Joseph, a young Syrian Christian from a family that migrated to Wayanad from South Kerala. He earned a lot of money in Saudi Arabia but when he came back, he invested almost all his earnings in ginger cultivation in neighbouring Karnataka, expecting huge profits. But the price of ginger declined sharply and he lost his entire investment. He is now looking for a job to go back to Saudi Arabia to make good his loss.

Sunanda worked on the documentary for around six years, looking for ways to capture and represent the complexity of such people and their habitations. Much of the film rests on the relationships she was able to build with her characters over this period.

Most of the pre-shooting research was done through long bus journeys which often meant traversing different terrains from rice fields in the valleys through tea, coffee and rubber plantations along slopes, ending in dense forests on hilltops.

“I tried to lighten the heaviness and the seriousness of my subject by interweaving the bus journeys with the wetness and the dryness of the seasons, with the changing contours of the land and the textures of the faces so that they blend to form a holistic picture of the people whose story I wished to get across,” says the maker.

Sunanda has neatly fulfilled her aim of capturing the changing lifestyle, economy and ethnography of Wayanad as seen through the lives of ordinary people who are doing extraordinary things to sustain the ecological balance between Man and Nature. Their common aim is to sustain the happy marriage between the two through sustainable development.