Witness to a changing world

Akanksha Joshi's film chronicles the changing world through the lives of age-old communities and the adaptations they are forced into. Shoma Chatterji reviews Earth Witness.
19 April 2012 -

Earth Witness . Reflections on the Times and the Timeless is a documentary film made by Akanksha Joshi. It won the Best Film (Climate Change & Sustainable Technologies) Award and the Best Cinematography Award at the 6th CMS Vatavaran and was screened at Mumbai International Film Festival 2012.

Four people - a father, a teacher, a farmer, a shepherd - find themselves on the frontline of the Earth's biggest, most complex crisis - climate change. Shikari Biaga is a Biaga adivasi who lives and works in Chhattisgarh. Doongra Rabaari is a semi-nomad who comes to herd his sheep in Gujarat. Seno Tsushah who speaks English is a Chakesang Naga from Nagaland. Sukdev-da is a farmer in the Sunderbans.

Belonging to India's ancient tribes, living in deep proximity with nature, they use challenges as a part of their art. They battle courageously, making weapons of wisdom and compassion; and the strategy deployed in any respected battlefield - flexibility. Their lives journey through the dark labyrinths of the multidimensional crisis, reflecting stories of our times - of trees, mining, monkeys, logging, rivers, seeds, waterfalls, flowers - and the spirit of the timeless.

Joshi explains her motivation quite succinctly. "There has been a lot of talk about climate change over the past few years. Like many, I heard the words too, reacted to them, and then, threatened by the barrage of facts and figures and complicated scientific terminologies, I became immune to it. The jargon around climate change distanced me from the issue. Yet I felt the need to connect, not just with 'Climate' but with 'Nature'. This journey began with a longing to listen to the Earth. The ideal medium would be to listen to the people who live, love, play and work with the Earth - the Biaga tribes, the Nagas, the farmers, the shepherds." 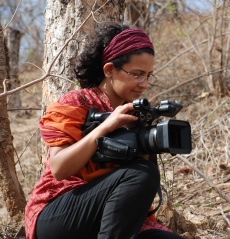 "The jargon around climate change distanced me from the issue. Yet I felt the need to connect, not just with climate, but with nature," says Joshi.

•  The iron is hot
•  Meandering an important course

Joshi is no stranger to good documentaries. Her first effort, Passengers: A Video Journey in Gujarat (2003) was a 52-minute long film that explored communal violence in India chronicling the journey of a Hindu and a Muslim family during and after the carnage. After five years, Joshi visited the carnage area to document stories of people who had saved others during the violence. This came out as "Profiles of Courage and Compassion" in a book she co-authored with Harsh Mandar titled Towards Healing. She received the Karmaveer Puruskaar, National People's Award for Citizen Social Justice and Action for Chilika Bank (2008), which highlighted ecological issues around Asia's largest brackish water lake. The film received the Livelihood Award in the 5th CMS Vatavaran Environment & Wildlife Film Festival.

Earth Witness travels across Chhattisgarh to explore the local people's indigenous Forest Ecosystem, to the Dryland Ecosystem of Gujarat, to to Nagaland's Mountain Ecosytem and finally to the Coastal Ecosystem of the Sunderbans. Each system reflects adaptation to the immediate environment by the locals who are familiar with the ecology, the geographical mapping and the benefits of the environment in which they live. The film zeroes in on an expert who talks about his/her system of taking advantage of the ecological circumstances of their lives and gaining from it without causing any harm to the environment in any way.

Shikari Biaga goes from village to village collecting seeds, realising that for the farmer the variety of seeds freely available is the basic security. That gives him the flexibility to experiment in climatic uncertainties. Says Shikari, "Ten years back there were only bullock carts on the roads. Now big companies, big industries have come up and they have captured a lot of land, built huge factories."

According to Biaga mythology, the Earth is the mother. Using a plough is like sawing through the heart of the mother. The Biagas who lived on the hills grew food by clearing small parts of the forests. They avoided tilling big and plain fields because that would need a plough and it would be sin. The technique they adopted was called dibbling, that caused minimal tillage on steep slopes. It was an intelligent way of preventing soil erosion. But this is no longer possible because traditional, shifting agriculture was banned. The land became rocky, no food grew and even the river dried up.

Sukdev Mondol of Sundarbans knows that the river will take his home, his farm. In another 15 years or so he will be homeless. Yet, he is not worried or anxious or panicky. He is aware of the damages of chemical industrial agriculture. He has stopped using chemicals in his farms. He is investing in the present, in the Earth.

He says, "The only way to survive is to keep making dams continuously." He points to a tree in the distance and asks, "You see that dead tree? There was a settlement right there. But people had to move from there. Now this dam has been built. This will also submerge soon." His home, his farm is at a level lower than that of the river level. A fragile mud bank is the only boundary protecting his home from the river's waters. A boundary the river defies at will. "What the river is trying to say is ... Give me the amount of forest I require. If I don't get the food I require I will fight for it, steal it, get it by any means," says the wise Suikhdev Mondol.

Connected to the seas, the river is tidal. Its salty waters rise and fall every six hours. Sukdev Mondol has noticed the river tides change over the years. In this interplay of river and land a new dimension has emerged. The water of the sea is expanding, and rising globally. 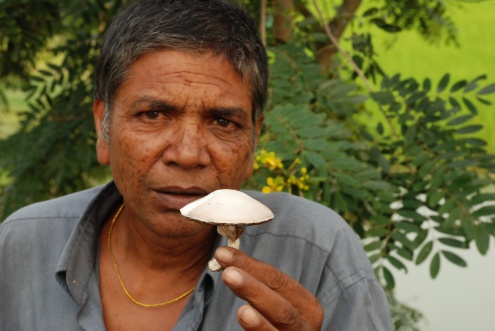 Seno is a school teacher in Nagaland. Seno's village, Chizami, is celebrated for its biodiversity. It is home to the Chakhesang Nagas. The farmers here depend on nature for productivity and on the grace of the Himalayas. Learning from nature comes simply to this ancient tribe. The forest teaches them the principle of diversity where different trees grow in harmony. Water teaches them flexibility and the rocks teach them patience. Seno says that they have more than twenty kinds of crops in the area and many wild herbs actually enrich the environment.

She explains how a particular herb is used as an addictive decoction but can also be dried and stored as a medication for malaria or to stop the bleeding from bad wounds. Bamboo channels are connected to wet paddy fields directly to prevent the wastage of water.

Doongra Rabari is from Umariya village near the Rann of Kutch. The rabaaris are semi-nomadic herdsmen. Says Doongra, smiling, "It was easier to graze the animals earlier. There were trees and fruits and it would rain in time. We could go back home ... Like people, God has also changed! He does not send the rains in time anymore!"

Once, the rabaaris were welcomed by the few farmers in the village because the sheep and goats of the rabaaris were a source of fertility for their farming fields. We did not need to pay them to stay here during grazing time. But these days, we must pay them during the time we stay here. Ten rabaari families had to pay a huge sum to the farmers to let them stay. Conflicts with farmers are now common." The forests have thinned out and there is no free land. The rabaaris now must keep running on tar roads.

The film returns to the same people in the same habitat, trying to explore and find answers to the forced 'developmental' plans that are threatening the lives and livelihoods of the original inhabitants. Shikari Biaga points out, "In Daldali, 75 villages have been relocated to make way for the bauxite mines. The land has become rocky. The water levels have gone down further due to blasting." The local Forest Development Agency orders the cutting and cleaning of the forests for planting teak. This will destroy many named, unnamed roots, plants, medicinal herbs, firewood. Teak trees will be planted here. Later, they will be cut and - most likely . be used to make furniture. This is the land where the Biagas grow their food.

Doongra talks about the sudden rise in the cultivation of BT Cotton in Gujarat. While the cultivation of traditional cotton is rain-fed, BT cotton can be planted in the dry summer. More and more of the earth's fast-depleting ground water is used for the irrigation of BT Cotton. As a result, the water table is falling by as much as three to five inches per year. Instead of growing food, much of the land has been diverted for exportable crops like BT. Global industrial agriculture is of little use to Doongra or his sheep.

Joshi treats her subjects with the respect they deserve instead of placing them on a pedestal of martyrdom. She does not allow her camera to turn voyeuristic by capitalising on the precariousness of their existence. She holds up facts as they are and leaves her viewers to draw their own conclusions. Her subjects too - Doongra, Biaga, Seno and Sukdev - do not pose as victims of climate change. They narrate the tragedy of their lives without dramatizing or expecting pity.