Girl children who were given names that reflected their unwanted status are being renamed in Maharashtra, in a new initiative to reverse the decline in sex ratio. Freny Manecksha reports.
06 September 2011 -

Narayan Waghale welcomes us inside the dim central room of his mud and stone house where family members nestle in companionable ease with clucking hens as the rain lashes down. He calls out loudly for 'Naku' and then smiles awkwardly. Old habits die hard. For he has forgotten that the seven-year-old little daughter he has just addressed was re-christened Aishwarya a week ago.

But, what's in a name? Plenty if you happen to carry the indignity of being labelled Nakusa from your cradle, as this little girl and her elder cousin found. Meaning "unwanted", the names of these two girls of Shankarwada, Narabdev village in Saygaon taluka of Satara district, Maharashtra are a reflection of just how low in esteem the girl child is held in many parts of India.

A survey in Satara district carried out through anganwadi workers and other health workers has revealed there are at least 222 girls up to the age of 16 with the same name in the blocks of Jwali, Mann, Patan, Khandala and Phaltan - many of which have low literacy rates and are situated in hilly, rather remote terrain. Not surprisingly Patan, which has the maximum number of Nakusas, also has the lowest sex ratio.

Now, an attempt is being made to bestow some dignity and status to these girls with a re-christening and official change of names.

District Health Officer Bhagwan A Pawar explains how the concept came about. "We have been concerned about the declining sex ratio in Satara district over the past few years. From 2001 to 2011 the figure of 995 (that is 995 girls born in ratio to 1000 boys), declined to 886. When we launched a vigorous campaign in favour of the girl child around two years ago in the Mann block we came across a health worker who had the name Nakusa. Some probing revealed that it was customary for many young daughters to have been saddled with such a name when they were born. 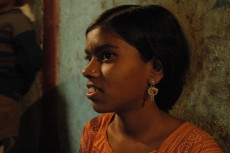 Thirteen year old Sunita Pandurang Waghale chose the name Sunita for herself, to affirm her worth in society. (Pic by Dilnaz Boga).

"We began a list at the suggestion of social activist Sudha Kankaria with the purpose of persuading the families to change the names officially so that when school and college certificates are distributed or when the girl gets married she does not have to carry this indignity forward. It was also decided to have a small ceremony and send out the message that our society wants girls and holds them in esteem."

The re-naming programme was initiated this August with a simple ceremony in which two girls - Aishwarya and her 13-year-old cousin who chose for herself the name Sunita - were felicitated and their new names officially registered in the presence of zilla parishad officials.

The re-naming is, however, just one of the slew of measures being taken by the zilla parishad to redress the declining sex ratio and to raise societal awareness on the worth of the girl child. As health workers and officials of the Primary Health Centre in Saygaon point out the re-naming should spur a change in mindset and attitude in society. "It is not as if education alone counts. After all it is educated doctors who are running illegal sex determination centres and conducting illegal female foeticide," they point out.

The desire for a male child can go to such desperate lengths that those who can afford it will undergo sex determination tests while those who cannot go through multiple births. Aishwarya was the seventh successive daughter in her family and was thus labelled Nakusa.

Health workers, therefore, face a particular challenge in persuading parents to undergo tubectomy and conform to the desired two children norm when both children are girls. One of the ways they try to send out the message of pride in daughters is by felicitating such couples who opt for tubectomy with the customary practice of presenting them with a shawl at a public function.

Social messages are being reinforced through a programme called Save the Girl Child, elaborates district health officer Pawar. These include melavas (public gatherings) and workshops that stress on the importance of health education, pre natal and ante natal care and through street plays, posters and rallies. Events like Ballika Janam Utsav to celebrate the birth of the girl child are organised with girl students being garlanded and rallies and pamphlets highlighting the dangerous consequences of a declining sex ratio.

Recently, on the occasion of Raksha Bandhan, a programme was organised whereby three lakh students of the district organised rallies and took an oath to prevent female foeticide, asserting the need for sisters. 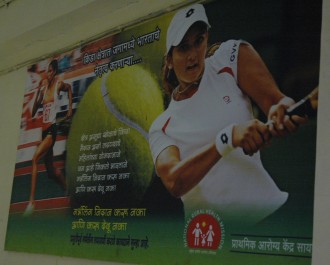 In this two-pronged approach hard-hitting measures are also employed to boost the sex ratio. This includes monitoring of all pregnant women and a tighter implementation of the PCPNDT Act (pre Conceptual and pre Natal Diagnostics Technique) which allows screening of pregnant women for genetic and metabolic disorders but disallows sex determination.

A health worker at the Saygaon Primary Health Centre explains how the monitoring of pregnant women is being undertaken by anganwadi workers, ASHA (Accredited Social Health Activists) workers whose services are utilised in rural areas for reproductive health care) ANMs and NMs. They keep tabs on all pregnant women under their care. If a woman does not turn up for her check up someone is urgently dispatched to her home. This monitoring ensures that she does not attempt to go to an illegal sex determination centre and abort a female child.

"The problem is that even if there is a complete shutdown of such centres in Maharashtra there have been instances of women going across to Karnataka and word of mouth spreading over the willingness of unscrupulous doctors to carry out sex determination tests and foeticide," say workers.

The civil surgeon of Satara, Dr S P Jagdale and 17 medical superintendents have been keeping a vigilant eye on the 136 MTP (medical termination of pregnancy) centres and the 134 sonography centres that are located in various urban centres like Satara town, Karad, Wai and Phaltan. Over the last four years 11 illegal centres were shut down. Civil society organisations, especially the Dalit Mahila Vikas Mandal and those working with OBCs, have lent support and provided decoys for sting operations.

Nodal officer Dr Deshpande, who has worked hard to ensure strict implementation of the law, explains how they are spreading awareness and sensitising people through workshops conducted for various groups like ASHA, medical students, paramedics, homemakers, teachers and anganwadi workers. One of the most important measures taken was conducting a workshop for the judiciary on the provisions of the Act and its misuse.

"One of the problems in implementation was the difficulty in lodging cases of misuse of the Act because of lack of awareness of its provisions. Many were not aware that this Act empowers the Civil Surgeon and medical superintendents to take action and that it does not need FIRs by the police to shut down a centre," says Dr Deshpande.

Consequently there were very few convictions. In 2003 the first case for misuse was lodged and in 2005 a doctor from Karad was convicted and handed the maximum sentence of imprisonment and a fine. The conviction is noteworthy in the light of data recently presented in Parliament by health minister Ghulam Nabi Azad admitting there were only 13 cases of conviction for violation of the Act in 2010. Maharashtra, Punjab and Delhi were the only states with convictions to their credit.

For the Nakusas of Maharashtra, however, the gesture of getting a new name and bid for enhanced status will assume significance only if during their lifetime they stand witness to a considerably improved sex ratio.

TIGER SANCTUARY : Are tigers back at the Buxa reserve?
MORE ARTICLES
on similar topics ...
GENDER VIOLENCE