From awareness campaigns to real change

Union Human Resource Development (HRD) Minister Kapil Sibal would do well to assess the learnings from two recent and major HIV/AIDS awareness campaigns, before "looking into the ban on sex education", if he really wants to make change, writes Charumathi Supraja.
29 July 2009 -

The Union Human Resource Development (HRD) Minister, Kapil Sibal, has promised to look into the ban on sex education, and proposed other crucial changes in the education sector.

What is Sibal up against? Theres been many a squabble on sexual health and behavior awareness for the young. An informed public debate is long pending.

We cannot step into this debate without tuning into the minds of the young. Bombarded with mass-media imagery thats all about the body, yet protected from excessive knowledge about the body - do children have space to clarify and grow safely? How honestly or comfortably do adults discuss sexual behavior, if they ever do?

Inducing behaviour change  whether among adults or adolescents - especially on sexual health, has never been easy. Its taken drastic social change and health threats to move from flat campaigns like Hum Do Hamare Do (or We Two, Ours Two) painted behind lorries to stylish TV commercials going Condom, Condom. Though both campaigns seek to change audience behavior, one is instructional while the other understands the consumers predicament and demonstrates how progressive it is to be unashamed of condoms.

Recently, HIV  the virus that causes AIDS - has challenged the communication capabilities of health and communication experts, world over. Information on HIV is not allowed easy entrance into the public psyche. The virus is not just tainted by its immediate association with promiscuity, it generates debates on funding and public health spending. HIV is a communication challenge more than a public health challenge, especially in India.

How do you build HIV awareness when sexual relations are not openly discussed even between partners or within families; when life-skills education is debated; when attitudes towards gender and sexuality are entrenched; when gender inequity is rampant; when access to education and quality healthcare is uneven; when the social pressure on conformity is higher than on honesty?

It was interesting to observe the way children, young people and adults transacted with messages on safe sexual behavior and HIV transmission during two large-scale HIV prevention campaigns - the Red Ribbon Express and the Mid-media campaign. 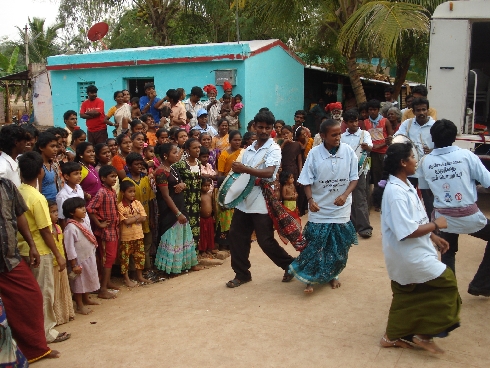 People watching a street play on HIV prevention, in Dharmapuri, Tamil Nadu, during the Mid-media campaign. Pic: Centre for Advocacy and Research.

In both campaigns, messages on modes of HIV transmission, stigma and discrimination, vulnerable groups and health services were reached out to people  in rural and urban India - by use of innovative methods and technology. Trained cultural performers traveled from village to village making a song and dance about HIV, urging people to protect themselves and ensure the well-being of their families.

The task ahead for Minister Kapil Sibal: Learnings from these campaigns noted above could be a good starting point to introduce change. He should remember that people make their own thing of campaigns and policies.

The Mid Media Campaign was a rural focused, ten-district health campaign that recently concluded in Tamil Nadu. The objective of the campaign floated by Tamil Nadu State AIDS Control Society (TANSACS) and the National AIDS Control Organisation (NACO), was to ensure that every child is born HIV free. 12 mobile vans and cultural troupes covered around 120 villages in each district, giving out information about health, HIV and related services. Detailed one-to-one communication sessions were conducted by volunteers during house visits. Institutional delivery was promoted.
Scenes from the Mid-media campaign

Its four in the evening at Boothapandi - a village near Kanyakumari, Tamil Nadu. Bare-foot cultural performers have just completed a street play on HIV. Nearby, a little girl is playing on a terrace with her friends. An impromptu, roadside competition draws her attention. The campaign volunteers are asking anyone in the floating audience to name two modes of HIV transmission. Raktham. Usi, (blood and needles) calls out the little girl. She receives her prize  a steel tumbler  smiling for a camera. The residents of the same village regularly check with their healthcare provider if she uses disposable syringes.

At Ishanthimangalam, another village near Kanyakumari, the cultural performers are setting up their sound system with only a teashop, a phone booth and a mechanic shop in sight. The village is hidden from the main road. The owner of the phone booth saunters out asking what the brouhaha is about. Some AIDS campaign, he is told. Dont say AIDS. Say Acquired Immuno-Deficiency Syndrome, he replies. The campaign volunteers ask a man from the mechanic shop how HIV transmits. The man replies awkwardly, If you are clean, you will not get AIDS. His friends goad him to say more. The volunteers ask them to explain. Oru maapilaikku oru ponnu (One woman for one man). If we follow this tenet, no one will get AIDS, says the friend. Thats not the only way. If the mother has HIV, the child might also get, says another.

At Eritchakulam, near Nagercoil, a couple of men are offended by a mobile condom stall near the bus stand. People in this village are not like that. Remove all this A bystander  a local resident - pacifies and packs them off. Back in the bus, the cultural troupe members and volunteers discuss how the response was - People never used to listen to us before. At least, they stop and listen now. Two men on a bike, stop by the bus window, pick up condom packs and zoom off.

The Red Ribbon Express - a specially designed train containing exhibits on HIV, training and counseling facilities - traveled through India for a year, covering 180 railway stations. The technology-driven exhibits facilitated a direct interface between the messages and audience. A well-designed exhibit on prevention of parent to child transmission was a crowd-puller. Most visitors were unaware that parent-to-child-transmission of HIV is preventable. They marveled at this message of hope.

High school and college students were most comfortable handling the multimedia exhibits. A group of high school girls in Dharwad, Karnataka, opined that we need to see such exhibitions more than the boys. Boys have ways of getting to know about these things.

I saw what they meant when the Red Ribbon Bus (a fraternal twin of the Express) stopped at Manolli - a village in Belgaum, Karnataka. A young man would not allow his sister to enter the bus. There are only men inside. Go home, he said. She obeyed though I pointed out the female counselor and women in the bus. 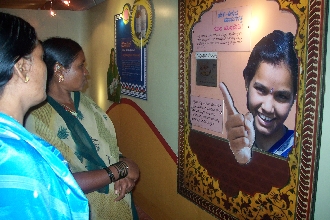 Inside the Red Ribbon Express stationed in north Karnataka. The exhibit is clarifying myths and misconceptions about HIV. Pic: Centre for Advocacy and Research.

The Red Ribbon Bus stopped at Saudatte Bus Stand, Belgaum. Considered a hotspot for clandestine Devadasi dedications, Saudatte sees a daily inflow of students from nearby villages. Its proximity to Yellammana Gudda, (temple to Yellamma - to whom Devadasis are dedicated), adds to its vulnerability.

The artists accompanying the bus improvised a stage in the middle of the bus stand. A generator powered the sound system. People gathered. They hovered, listened to the songs and watched the street-play highlighting the link between migration and HIV. The audience stayed on to enter the Red Ribbon Bus and meet the male and female counselors who explained the exhibits and clarified doubts. The visitors insisted that the bus should be taken to Yellammana Gudda.

Yellammana Gudda looked like any other pilgrimage spot in India - mountains of yellow and red Kumkum sold in makeshift shops; basket sellers seated on the pavement displaying colorful wares; traditional fortune-tellers delighted with the possibility of many hands to read. Brisk business intermingled with religious fervor.

The bus caravan drew its audience. A young couple from Bhadravathi showed keen interest in the exhibition. Lambadi women and the fortune-tellers - lingered and listened.

As visitors walked in and out of the bus, a young woman, who was with her sister, was equally hesitant to leave or speak to the counselor. Finally, she walked up and asked a complete stranger if she should have sex with a man shed known for three years. He was pressurizing her. She liked him. He was much older, married and used to visiting many women. This exhibition says unprotected sex can cause HIV infection. Should I go with this man or not? she asked. She was counseled but left looking worried.

Coming back to the task ahead for Minister Sibal, the learnings from these campaigns noted above could be a good starting point to introduce change. He should remember that people make their own thing of campaigns and policies.

Whether its a policy change in education or a decision on sex education, hope the Minister will consider and respect peoples realities. Campaigns and policies that understand and address real people  not textbook constructs  can lead to healthy social change.

Charumathi Supraja is a freelance journalist based in Bangalore. She is also a consultant with Centre for Advocacy and Research - a non-profit media and communication research group headquartered in New Delhi. She writes on gender, development and sexuality issues.