Home, not so sweet home

The recession in the West is having a profound impact on the deep rural interior of Orissa. Thousands are returning home, writes P Sainath.
01 August 2009 -

"The media write about drought and starvation in Orissa, the channels show a grim picture of agriculture here - and our employers in Gujarat use this to depress our wages," says Bikala Swain reproachfully. "The malik says: 'I know you have nothing in Orissa, so don't complain about what we give you here.'"

Bikala, whose name translates roughly as 'desperate' is speaking to us in Lathipada village in the Sorda block of Orissa's Ganjam district. He is one of hundreds of thousands who migrate from here each year in search of work. Most from this village of some 3500 people, where there is a migrant from almost every single household, go to Surat in Gujarat to work in that city's textile units. Some from this region, though not from Lathipada, also worked in Surat's diamond industry.

With the export-based units there taking a severe hit due to the recession in the West, tens of thousands of workers have returned to villages like Lathipada. A homecoming filled with problems and complexities. Over six lakh Oriyas are estimated to be working in Surat and adjoining areas. Of these, researchers and the workers themselves believe that more than four lakhs are from Ganjam.

The malik says how we eat is our concern - his concern is that the loom should not stop working for a minute.

Now, as many as 50,000 have returned to Ganjam - a district that sees labour migration each year from all its 22 blocks. "From 10 of them," says Lokanath Misra of the NGO Aruna that has researched the subject here, "there is a migrant from every household." "There is always a steady traffic to and from Surat," say people in Lathipada. "But this time many will stay back or move on to other places." Still more might follow those who have come back. And tension is building in the villages. "Who will eat? Who will provide?" asks Ganesh Pradhan who has worked over 25 years at operating looms in Surat. "People left here in the first place because there was no work in Ganjam. Now things are changing in Surat also. Apart from those laid-off, there are countless thousands of others being made to work for much less there." That in turn hits the villages of Ganjam hard as remittances from migrants run to hundreds of crores of rupees each year.

The recession in the West is having a profound impact on the deep rural interior of Orissa. (At least two returning workers in the village actually used the word 'recession.') About a hundred workers returned to Lathipada alone from Surat just days before our visit. "If someone comes home for a few weeks, it's all fine," says Achyutananda Gouda. "But if you hang on much longer, there is pressure on the family's resources." In Gujarat, says Ganesh Pradhan, "it was possible to earn up to Rs.200 or 250 a day. You do that by working 12-hour shifts each day under awful conditions that have grown worse in recent months. If you are skilled and can do dyeing and printing or embroidery, you might earn up to Rs.500 a day. That is Rs.15,000 a month." Now, it's falling apart.

Nilamani Guru has two sons in Surat. "One is skilled and was earning that Rs.15,000 a month (No holidays, weekends, nothing, you are only paid for the days you work). The other was earning the standard Rs.200 a day. Since the past few months, the skilled one's earnings have collapsed to the same level as his brother. The malik says take it or leave it."

In part, the collapse of the diamond industry has also meant a surplus of skilled and semi-skilled labourers in Surat. "This means that the owners can further push the wages down," says Kalu Panda, convenor of the CITU, Ganjam, which is working amongst the returnees. 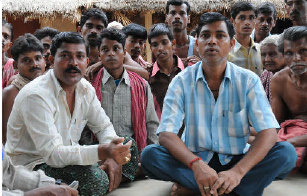 Ganesh Pradhan and other Surat-returned migrants in Lathipada explain how the crisis in Surat has hit their village in Orissa. (Picture by P Sainath).

"The employers know we have few options," says Ganesh Pradhan. "Earlier, there was more money. There was a proper one-hour recess. Quite some time ago, there was even a day off. Now a man handling four machines at one time might have to handle six. Work is up, pay is down. The lunch break has gone. The malik says how we eat is our concern - his concern is that the loom should not stop working for a minute. Not at any time in the day. So if you take a half-hour break for food, the men beside you have to operate your machine till you return. Then you do the same for them. Our 12-hour shifts could be day or night. We're losing money and strength."

The fall in wages makes Surat less attractive than it once was. "Here," say Achyutananda Gouda and Shriram Pradhan. "those who have BPL cards get rice at Rs.2 a kg. Those who don't, buy it in the market - at Rs.12 for that quality. In Surat, it is a minimum of Rs.22-24 a kilo. Everything there is costlier by Rs.10 a kilo."

"Even the rents are climbing," says Santosh Gouda. "Understand how we live. In those slums, seven to eight of us share a tiny room that we might pay Rs.1000 for or more. In any case, the landlord takes an advance of Rs.5000 when we strike the deal. (In some cases, workers have rented space in shifts, for sleeping time only.) There is no latrine of any sort and we have to make it each morning to the banks of the Tapi river for that. If many of us hire a very small place with a bathroom, that rent is upwards of Rs.2000, often more. And now wages are falling."

That's when Bikala speaks about media coverage hurting wages. But many disagree. They want journalists to highlight the desperate state of their village and insist on showing us there now almost-empty water tanks and other problems. And they do not see many ways of halting the village's loss of income.

Ganesh Pradhan, though, says he will try his luck again in Surat. "It's not as if we know that things are much better anywhere else."