How non-compliance is condoned: A short story

Evidence of violation of environment regulation by the Adani group in their Mundra Port and SEZ Ltd and the Waterfront Development Project have been found. Kanchi Kohli reports on why both the projects are still moving ahead.

It was 2010 and much was happening in Mundra. What was once a relatively unknown block in Kutch district of Gujarat had become a talking point nationally and globally. Debates around Special Economic Zones (SEZs), industrial reconstruction work post the Kutch earthquake, the meteoric rise of the Adani group of companies and visible environmental and social conflicts: it was all happening in Mundra. Cases were filed in courts and complaints were being sent to India’s environment ministry.

In December 2010, Mundra perhaps saw the first set of concrete actions being taken by the central government around environmental impacts and livelihood loss, which were playing out in the region due to large scale land use change.

The two projects at the heart of the issue were what were then known as the Mundra Port and SEZ Ltd (MPSEZ) and the Waterfront Development Project (WFDP), which included the construction of three ports and several operations including a railway line for captive use. Both these projects were being executed by the Adani group. 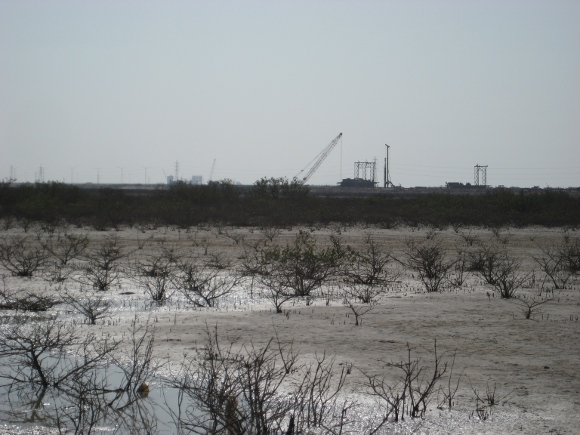 Construction activity at WFDP project in 2010, the site is not accessible anymore. Pic: Kanchi Kohli

These projects faced several allegations related to incomplete assessment and procedural lapses related to their approval. In addition, there were loud slogans around the environmental degradation and livelihood losses being caused by construction activity under these projects.

Non-compliance and the destruction of mangroves, creeks

The ministry eventually acted. After a site inspection, an official show cause notice was issued under Section 5 of the Environment Protection Act, 1986 to the MPSEZ Ltd. This notice dated 15 December 2010 concluded that reclamation was being carried out by the project in mangrove areas, a large amount of mangrove had been destroyed and the natural flow of seawater was being obstructed among other things.

The notice clearly attributed the damage to mangroves, creeks and related losses to the violation of conditions laid out in the environmental approval granted to the company for its waterfront development project in 2009. The approval in this case, as in all others, was granted either under the Environment Impact Assessment (EIA) Notification, 2006 or Coastal Regulation Zone (CRZ) notification, 2011 or both, and came with a clear set of safeguards.

The project proponent while accepting this condition had legally committed that there would be no destruction of mangroves, no filling of creeks and pledged to comply with other specified conditions.

Even as the show cause notice came and went, business continued as usual in both the WFDP and the overall SEZ. PILs continued to be filed on big issues including grazing land acquisition or the lack of approval for the operations of the SEZ itself.

Around early 2012, a few community representatives, a fishing union and NGOs in Mundra initiated a community led ground-truthing exercise. This study was an attempt to first understand the laws governing industrial and infrastructure activities in an area like Mundra, and second, if the livelihood impacts already being faced by villages in the area had any relation to the lack of compliance with environmental regulation.

This process also attempted to build on with what was happening in 2010, when the ministry had responded to complaints and issued notices.

Using different forms of evidence collection, such as satellite maps, photographic evidence, government records, newspaper articles and testimonies of affected people, it was concluded that several forms of impact brought about by the loss of mangroves, blocking of creeks, destruction of sand dunes etc were all linked to the non-compliance of the 2009 environment/CRZ approval given to the WFDP.

The exercise also highlighted that the same approval letter gave powers to the MoEF to revoke the permission to the project in case any of the conditions were not complied with. But despite the show cause notice, this had not happened.

Just as the above ground-truthing exercise was concluded, the MoEF set up a committee to carry out “inspection” of the activities of the Adani Port and SEZ Ltd (APSEZ, which was earlier known as the MPSEZ). This focussed specially on the 2009 environmental approval to the company under the EIA and CRZ notifications.

As was the case with the 2010 show cause notices, the Terms of Reference (ToR) of this committee also referred to the complaints made by a local NGO Kheti Virasat Seva Trust and the local fishing union, Machimar Adhikar Sangharsh Sangathan (MASS).

What the ministry had already concluded in 2010 was now to be reviewed again, only along with some additional context and a wider scope. In other words, the committee constituted in September 2012 had to assess whether the project proponent has complied with the conditions subject to which environmental approvals had been granted.

The Committee was also to present facts related to APSEZ’s activities and destruction of mangroves, sand dunes, creeks and so on. In addition, this committee’s ToR also extended to the impacts of the thermal power plant of  Adani Power, which too was located within the same SEZ.

The team visited Mundra and received additional submissions including the above mentioned ground-truthing report. Their report of April 2013 concluded that “there is incontrovertible evidence of violation of EC condition and non-compliance. It must also be recognized that the Company has bypassed environmental procedures in certain cases.” This included several of the conditions which had to be mandatorily followed as per the approval to the WFDP project dated 12 January 2009.

This was, therefore, the second time that either the ministry’s officials or its committee had unequivocally concluded that non-compliance of environment regulation had taken place.

The 2009 approval had clearly stated that “the ministry reserves the right to revoke this clearance, if any of the conditions stipulated are not complied with to the satisfaction of the ministry.”  This clause had the chance of being applied once again.

But the right appeared to be reserved only in favour of the violator. The report did acknowledge that the cancellation of approval was an option available to the committee.  However, this was not exercised as the committee’s report observed emphatically that it is not “prudent at this stage to halt or cease its operations” as a large amount of development had already taken place.

Instead, the committee put out a long set of recommendations to address the violations. One of these was holding back the construction of the north port, one component of the WFDP while another spoke of creating an Environment Restoration Fund worth Rs 200 crores (2 billion).

This fund had to be used for the restoration of the ecology including that of creeks, protection of mangroves and carrying out a cumulative impact study.

Almost immediately, these recommendations became debatable: Should the violations on record since 2010 be not dealt with in a more stringent manner? What is the legal basis of an environment restoration fund, and how would the APSEZ respond to it?

Flip-flops and reviewed conclusions followed. These are clear from the ministry’s file notings. On 22 December 2014 , the Special Secretary of MoEFCC recorded, not surprisingly and yet again, that there was in fact “large scale and conclusive evidence of violation of environment conditions.” He went on to present two options: either cancel the environment clearance of the waterfront development project or restore the ecosystem.

He further added that it is not advisable to cancel the approval, as it will further “halt development and economic growth.” Therefore, carrying out a cumulative impact assessment and ecosystem restoration would be the appropriate recourse for the future.

Eight months later, the story takes a different turn. The file notings of the Joint Secretary incharge on 6 August 2015 says, “…it is not possible to clearly substantiate the observation and responsibility of PP... to be directly accountable for the changes in the landscape of the area, specifically for creeks, mangroves or any other pattern”.

The same file noting refers to the 2013 report of the ministry to assert that though the committee “noted distortions in the creek pattern as well as some mangrove area degradation, they have not attributed the same to the APSEZ Ltd.” This amounted to saying that while there has been damage in the area where the waterfront development project and Adani’s SEZ exist, the ministry does not attribute it to them.

On 18 September 2015, the ministry concluded: “... it can be concluded that the response of the PP that ‘there is no non-compliance or violation of the terms of EC’ is incorrect.”  It further directs that  “the violations of the specific condition of all the ECs and CRZ clearance, if any, should be proceeded with the provisions of the EP Act, 1986. ”

This once again opens up the question on whether violations had ever occurred at all, and if they had in fact occurred whether action should be taken under the EPA, 1986.

This order also questioned and refuted the legal basis of the ministerial committee’s recommendations of the environment restoration fund in 2013. It allows for the ministry to once again consider the approval for the North Port, now that APSEZ is no longer a violator.

All other directions entail voluntary action, including the returning of grazing land of villagers by APSEZ and preparation of a specific plan for fishing livelihoods. However, the return of grazing land forms part of the mandatory obligation as directed by the High Court of Gujarat. Fishing access is already restricted in the area due to port construction.

Five years, many actors and a screenplay that questions the very basis of environmental decision-making and rule of law in India -- this is not an isolated instance but rather a case in point. It only exposes the deep crevasses within the monitoring and enforcement mechanisms in environmental regulation in the country.