Ignoring the ‘public’ at a public hearing

At a recent public hearing for the Parsa Coal Block in Chhattisgarh, citizens likely to be affected by mining there raised several concerns. However, much of it has been completely ignored in the official record of minutes, reports Kanchi Kohli.
28 May 2014 -

On 3 May 2014, the Chhattisgarh Bachao Andolan (Save Chhattisgarh Movement) wrote a letter to the Ministry of Environment and Forests (MoEF) as well as the Chhattisgarh Environment Conservation Board (CECB) alleging that none of the objections raised by them during the public hearing of the Parsa coal mine had been included while recording the minutes of the same.

Their primary contention was that the officially recorded minutes of the public hearing are grossly inadequate, do not address the critical questions raised and misrepresent what actually transpired on 28 February and 1 March 2014 at the hearings.

Public Hearings are mandatory requirements under the Environment Impact Assessment Notification (EIA), 2006. As an important step in the process to grant or reject environment clearances for industrial, mining or infrastructure projects, these hearings are critical to record the views of the locally affected people.

As a component of the public consultation process prescribed by law, public hearings are also critical for opening up the possibilities of public participation in the regulatory process. It is a one-time event where project authorities, affected communities, EIA consultants and regulators come face to face, to voice their questions, grievances about the project’s impact and seek answers. It is supposed to be conducted in a free, fair and transparent manner at a site closest to the place that a project (in this case, the coal mine) will be coming up.

Therefore, being accurate in recording what transpires in any public hearing is critical. The minutes of the public hearing become an important document, based on which appraisal of the project would take place. The video and written documents pertaining to the public consultation phase (of which public hearings are one part) are considered by the MoEF’s Expert Appraisal Committee (EAC) while reviewing the project for permission.

However, the potential of such public hearings has been curbed, manipulated and restricted ever since it was first introduced in the EIA notification in 1997.

According to the Terms of Reference (ToR) issued by the MoEF for the Parsa open cast captive coal mine in March 2013, the mining lease area covers 1252.447 ha. It is located within the Hasdeo-Arand Coalfields spread across Sarguja and Surajpur districts of Chhattisgarh.

The pre-feasibility report of the project states that the CSEB has been allotted the coal block on 2 August 2006, “to meet the coal requirement of their thermal power project. It is proposed to use coal from Parsa Coal Block in 2 x 500 MW Marwa TPP.” The thermal power plant (TPP) referred to is located in the neighbouring Janjgir-Champa district.

Mining in this coal block is going to be carried out through a joint venture (JV) between CSPGCL and Adani Mining, christened CSPGCL AEL Parsa Collieries Ltd (CAPCL). It is the CAPCL which will undertake development and operation of the coal with peak production capacity of 5 MTPA. However, the minutes of the public hearing do not have any mention of this fact.

One of the crucial issues raised at the time of the public hearing was an important condition laid out at the time when the Expert Appraisal Committee (EAC) of the MoEF had approved the ToR for the impact assessment to be carried out. There, it had been stated that since the area in question is on the fringe of forest land, biodiversity and ecological issues are very important.

Further since it is a virgin forest area, the option of underground mining should be examined. Therefore, the EIA should necessarily carry out a comparison of various possible options including opencast, underground and open cast-cum-underground mining, based on socio economic and environmental ramifications. 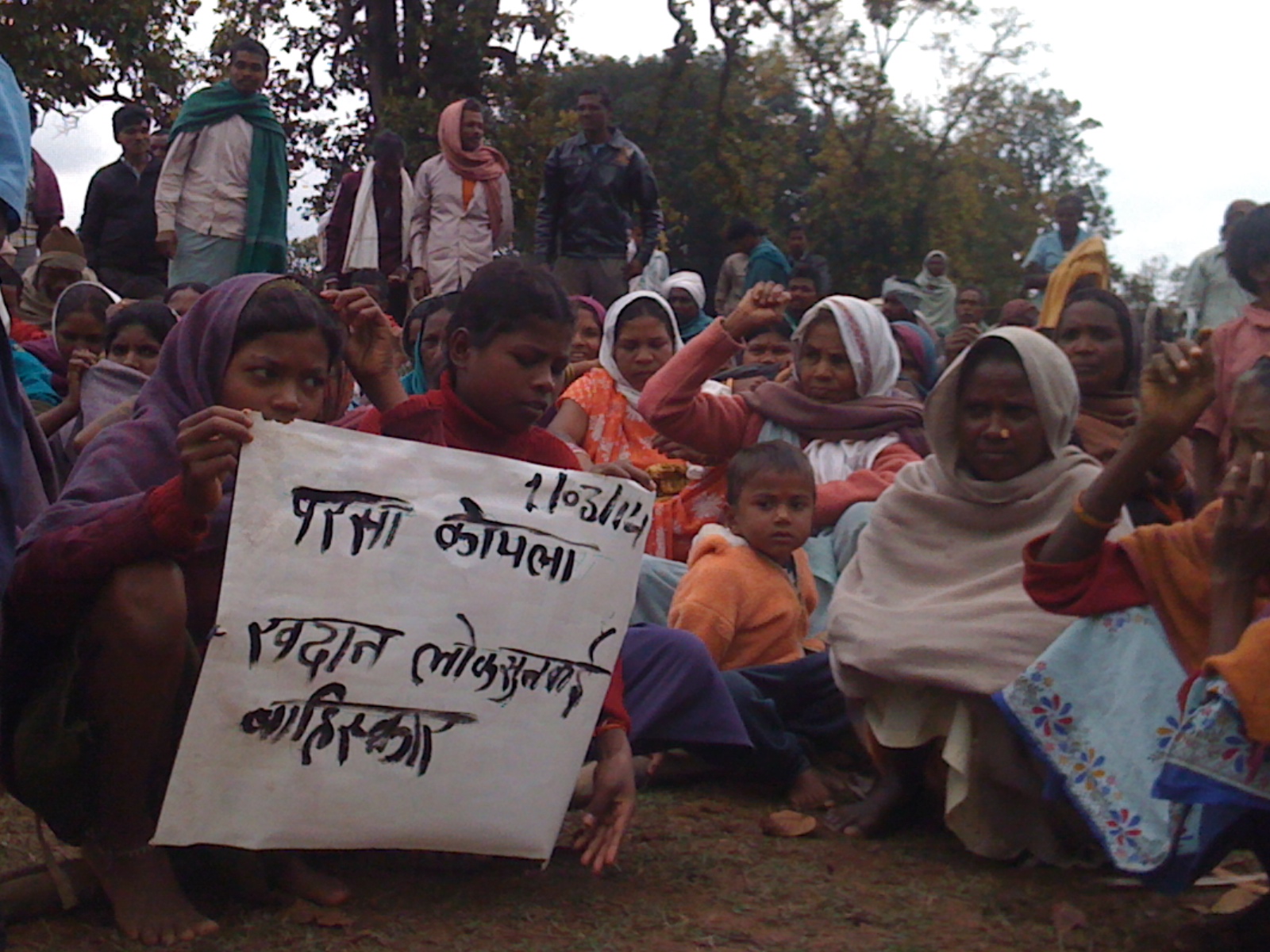 The CBA thereupon questioned the viability of this public hearing, and what would happen if the ISM subsequently concluded that open cast is not an ecologically viable option for this mine. Would the findings likely be fait accompli? Should the report not have been completed before responses of the affected people and concerned citizens were sought?

Not only was there no response to these concerns from the panel at the time of the public hearing, this entire issue, critical as it was, did not find any mention in the official minutes.

There are many other points, which were omitted in the official minutes though they are important enough to be presented before the EAC, when the project is considered for approval or rejection.

Instead of any qualitative documentation of the objections raised, the minutes portray the affected people and CBA activists as having indulged in sloganeering. With the raising of slogans and by questioning the legality of the public hearing, activists obstructed the people from participating on both the days, allege the minutes.

The CBA’s latest letter critiquing the minutes indicates that villagers of Hariharpur had written to the District Collector on 26 February 2014 demanding cancellation of the public hearing. The reasons cited in the letter include the environmental impacts and large-scale displacement likely to be caused due to an open cast mine. It also records that the area comes under Schedule V of the Constitution of India and that the due process for recognition of forest rights, as mandated by The Scheduled Tribes and Other Traditional Forest Dwellers (Recognition of Forest Rights) Act 2006, has also not been completed.

The displeasure and anger expressed at the time of the public hearing needs to be understood in the light of the fact that the collector did not take any action on the letter or give prior hearing to the villagers. He simply disregarded it and went ahead with the public hearing as scheduled.

Affected villagers highlighted their concerns once again at the time of the public hearing. A memorandum signed by 458 people boycotting the public hearing on 1 March was submitted to the collector. Neither of the submissions – the letter or the memorandum – find any mention in the final minutes of the hearing.

Other issues related to the inadequacy of the EIA report itself were also raised. Key amongst this is the issue of the forest density as well as sensitivity of the Hasdeo Arand region, and the widespread livelihood dependence of tribal and forest dwelling communities on this forest. These too are missing from the minutes.

Beyond the public hearing

While the current point of discussion may be the lapses in record keeping, a significant step in the EIA notification, the issue of the Parsa coal block is much wider. In March 2014, the National Green Tribunal (Appeal No.73 of 2012) set aside the forest diversion allowed for another coal block adjoining the Parsa open cast mine.

The judgment issued in the Parsa East and Kante-Basan (PEKB) mine set aside the approval for the use of forestland (issued under the Forest Conservation Act, 1980).  The entire basis on which the approval was granted has been questioned by the National Green Tribunal (NGT) and sent back to the MoEF’s Forest Advisory Committee (FAC) for reconsideration. It is a different matter that the project authorities here have challenged the NGT’s judgment in the Supreme Court of India.

What is important for the present case is that both the above-mentioned coal blocks are dealing with very similar issues, communities and impacts. Hasdeo Arand is a coalfield for some and an important forest for others. On one hand, it is up for extraction by joint venture partnerships and on the other, sought to be safeguarded for long-term livelihood and ecological security by some people.

It might very well transpire that the contentions raised by villagers at the time of Parsa’s public hearing are eventually set aside in search of coal underneath. But for now, the least these issues deserve is being officially acknowledged. Business as usual cannot be carried out, as if they don’t exist. That’s what the CBA demands.

2. Order of the National Green Tribunal regarding environmental clearance given to Parsa East and Kanta Besan Opencast Coal Mine

Kanchi Kohli is an independent researcher and writer.