In a significant move, the Kerala government has decided to promote the production and marketing of organic food. C Surendranath reports.
01 November 2003 -

Agriculture in Kerala is at the crossroads. Hundreds of farmers who had learnt the bitter lessons of chemical farming and mono cropping practiced hitherto in the name of scientific agriculture are making a come back to organic, multiple-crop farming. More importantly, taking a cue from the farmers initiative, the State Department of Agriculture has made a significant turn-around to promote the production and marketing of organic food by launching a programme and policy for Organic Sustainability of Kerala, named Jaivakeralam (organic Kerala).

The industry, mainly a few tourism groups, and the Confederation of Indian Industry chapter at Kochi, has chipped in, realizing the gains of branding the Gods Own Country, as the States tourism industry calls Kerala, a safe food destination. 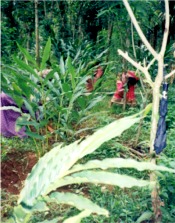 Marappanmoola village in Pulpally panchayat of Wayanad district illustrates the present movement best. By now, 454 small and medium farmers in the village owning on an average less than 2 ha of land have organized themselves to do organic farming. They now cultivate a mixed variety of crops including pepper, coffee, cardamom, coconut, areacanut, tubers, vegetables, cashew nut, nutmeg, rice etc. From the poultry and piggery units, they now collect the wastes and turn them into biogas for the kitchen and manure for the field. In place of chemical insecticides they now use the sap of chrysanthemum and marigold.

The farmers of Marappanmoola have formed the Highland Farmers Cooperative Society (Hicos) to take on the economic and ecological challenges of conversion from chemical-to-organic farming. Nearly 500 ha of contiguous smallholdings in this village already spot sign boards showing Organic Farming Zone. Though the crops from the area have not covered the waiting time (three years for perennials and two for annuals) for obtaining organic certification, even now they are being sold at 25-30 per cent premium prices in the domestic market through weekly markets. Export enquiries are increasing.

The organic farm movement in Marappanmoola is market-driven and firmly rooted in the tragic living experience of the farmers. The premium price obtainable in the external markets in the future is a major source of inspiration for the movement in Wayanad. A 50-gram pack of certified organic white pepper fetches $ 4 (Rs. 180) in the US market against the domestic price of Rs. 65-70 for a kilo of black pepper in the domestic market.

The yearning for the fabulous foreign market prices is one factor that makes many who have already been practicing sustainable agriculture in food crops remain lukewarm to the Marappanmoola movement and the support the Government has extended to it.

Initially people pooh-poohed the idea of going organic, says Jose Kodankandath, one of the pioneers of the movement that is now spreading in Wayanad. Wayanad is home to the fabled Kerala spices, especially black pepper and ginger. Coffee and tea are the other major crops in the district where cash crops rule the roost and over 80 per cent of agriculture is totally dependent on external markets. Vanilla, which fetches a dream price of more than Rs. 3,000 a kg, is now the sought-after-crop in the district.

Earlier, with each spurt in the price of pepper, farmers had increased the application of chemical inputs in farming several folds, almost 3-4 times the prescribed application dosage, eventually destroying the soil, points out S.S. Salumon, Coordinator, Special Cell for Sustainable Development in Agriculture and Organic Farming, Department of Agriculture. Pepper prices had shot up to the fabulous rate of Rs. 260 per kilo in mid-1990s. But the crash that followed (to around Rs. 70 per kilo) coincided with a devastating attack of quick wilt and root mealy bug infestations. Excessive application of chemicals during the boom reduced soil fertility and wiped out beneficial insects from the farms so that the average yield of pepper in Pulpally, the heartland of the crop, nose-dived from around 500 kg per ha to 80-100 kg per ha. Soon, caught in debt-traps, several farmers committed suicide. Many in the younger generation migrated to industrial towns to seek measly jobs in textile mills.

We observed that the mealy bug infestation had affected only plots doused with chemicals and this was the turning point, says Jose. In 1999, Jose, along with Babu Namboodakam, began organizing farmers into small groups. Now 454 farmers in the area are organized under 34 self-help groups (SHGs) including seven groups of women. The SHGs, which manage the farming activities through collective decision and work, have formed an apex body to liaison with marketing, credit and certification agencies. For internal control and monitoring, they have an ethics committee of elderly farmers. Each farmer now keeps a farm dairy of day-to-day activities. Bangalore-based IMO Control, a Swiss certification agency, has been contracted to carry out the certification process.

With 74 per cent of the cultivated area in Kerala occupied by farmers owning less than 2 ha of land, networking is the key to the success of the movement. Whereas lack of organic substitutes had been an important factor that earlier made farmers heavily dependent on chemical inputs, the SHGs now make available adequate amount of vermicompost, organic manure and pest control solutions, says Thomas, a member of Hicos. Women groups engaged in cultivation and marketing of vegetable play a major role in keeping up the morale and insisting on safe food in the kitchen.


The State Agriculture Department, which joined hands with the Marappanmoola farmers in 2002 mainly on account of the persistent efforts of Salumon, has by now conducted over 300 training programmes and set up a collection centre for organic produce in the village. Awareness creation among bureaucrats and scientists, apart from farmers and consumers is a major thrust area in the agenda of the Jaivakeralam programme because indifferent attitude of the scientific community has been recognized as a major constraint in the programme policy document.

Under the programme, the Government will play the role of a facilitator, forming farmers producing companies to manage the affairs by themselves. Two districts in the state, Idukky and Wayanad, and parts of a third, Palakkad where a few plantations groups grow organic tea, will soon be declared as organic farming zones. Crops to be given thrust under the programme include the scented rice varieties of Wayanad, called Gandhakasala and Jeerakasala; the Malabar spices and several varieties of tubers, besides tea and coffee. The Government will make support available for certification, organic manure production and marketing and also compensate the losses in the conversion period. The infrastructure support planned under the Jaivakeralam programme include a state-level research station at Aralam in Kannur district, three zonal sub-centres and regional labs with facilities for soil, leaf and produce residue analysis. The programme also aims at developing the domestic market for organic foods through a chain of supermarkets; labeling Good Agriculture Practice products; gradually withdrawing State supports on chemical inputs etc.

The State will play the role of a facilitator for farmers producing companies. Two districts, Idukky and Wayanad, and parts of a third, Palakkad, will soon be declared as organic farming zones.

Whether the intervention of the Government will institutionalize the whole movement and take out its genuine organic spirit remains to be seen, argues Tomy who runs Elements, an the eco-shop in Kozhikode. Others such as S. Usha of Thanal, an environmental group that had been in the forefront of fighting against aerial spraying of endosulphan in the cashew plantations of Kasaragod district, doubt whether the thrust on international certification and export will reduce the whole exercise to contract farming for global agribusiness corporates.

Legal restrictions on the sale of chemical inputs through measures such a prescription system is important for sustaining the organic farming movement, says Salumon. If medicines for human beings and animals could be sold only on the basis of doctors prescriptions, this should be more so in the case of with plants he says. (Quest Features and Footage)