Setting the clock back on clearances

What happens if you decide to expand your industrial project without getting fresh environment clearances? In Jindal Steel's case, it appears, you get to go on scot free. Kanchi Kohli reports.
08 January 2011 -

When it happened, it was called one of the boldest decisions taken by the Ministry of Environment and Forests (MoEF). It made the headlines of many newspapers and television reports. A show-cause notice had been issued to the Jindal Power Limited, a company owned by a current Member of Parliament - Naveen Jindal of the Congress, from Haryana. But within five months, it was back to business at MoEF, which reversed itself in a familiar sequence of events that let the company off the hook.

On 19 June 2010, by a letter written to the Director, Jindal Power Ltd. in New Delhi, MoEF withdrew its earlier approval of the Terms of Reference (ToR) issued for the expansion of Jindal's coal-based thermal power plant. A ToR is issued as a first step when a company wants to carry out an Environment Impact Assessment (EIA) prior to seeking environment clearance for expanding its project. The proposed expansion would add 2400 MW of power to the plant, which is located in Tamnar block of Raigarh district in Chhatisgarh. At the same time, the MoEF also wrote to the Environment Department, Government of Chhattisgarh to take appropriate action against the company.

The ToR had been issued in June 2009, but even before the impact assessment study for the expanded project had been initiated, the company began construction work to expand the project. In March 2010, the MoEF received a complaint by a whistle-blower group - Jan Chetana - about the unauthorised construction. The complaint highlighted the fact that Chhattisgarh Environment Conservation Board (CECB) had visited the plant site in February last year, following which it had made observations regarding the illegal construction. Soon after, the CECB asked the company to stop all construction activity. At a public hearing for the project held in May, the illegal construction was again noted by the Board.

Meanwhile, almost as an afterthought, the MoEF asked its regional office in Bhopal to carry out an inspection of the plant site, based on complaints it had been received. The RO representatives submitted their observations on 22 May 2010. This report too confirmed that construction for the expansion of the plant had been initiated without approval. The work at the site appeared to have been suspended at the time of the team's visit, but there was no doubt that construction had begun. The foundation had been dug, and roads and drains had also been constructed. The withdrawal of the ToR soon followed. 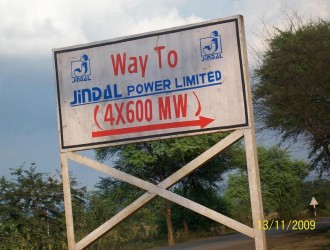 None of the company's explanations does anything to counter the fact that construction activity had already been initiated without environmental clearance. But there has been no penalty imposed for this violation. (Above: A signpost in November 2009 directing visitors to the expansion site).

The Regional Office staff also pointed to an additional irregularity, which the complaint from Jan Chetana had also mentioned - the project site had been shifted. The ToR had been granted with the understanding that 1041 hectares would be required for the construction the 2400 MW plant, along with the necessary ash dyke, water reservoir and housing colony. However, site inspections revealed that the land available with the company was on only 62 hectares.

JPL, however, argued that although it had originally estimated that 1041 hectares would be needed for the project, it had since managed to optimise the land use so that the project could be carried out in only 456 hectares. Of this, 129 hectares were already in its possession, and the remaining land was being acquired. Therefore, said JPL, the expanded project was more or less being carried out within its existing premises, and there was no cause to withdraw the ToR on account of land availability.

The company also presented other reasons why it should be allowed to continue with the project expansion. For one, the company had not been given an opportunity to explain itself before the withdrawal of ToR was issued. And secondly, the EIA notification under which environment clearances are processed does not have the provision to withdraw a ToR once issued.

None of this does anything to counter the fact that construction activity had already been initiated without environmental clearance. One needs to reinstate here that the expansion being sought by the company is to the scale of an additional four units with 2400 MW capacity, i.e. a 250 per cent addition to the existing 1000 MW under operation. It is certain that this level of revision of the original project will have significant impacts on the ecology of the region, and on traditional livelihoods in the areas to be acquired for the plant. The company, therefore, could not have regarded the expansion as mere revision of its earlier proposal, a kind of administrative formality.

Nonetheless, this is the lifeline that MoEF threw the company. The Expert Appraisal Committee of the MoEF, which met in August 2010, recommended that the project may be appraised by following the original ToRs along with additional information on compliance to existing conditions cumulative environmental impact assessment, details on ash generation and risk assessment due to expansion. That is, the project would be reapprised as though all of the information about the expansion was also available with the Ministry at the time of the original ToR. In effect, this made the illegal construction seem as though it was always part of the company's proposal, and that it too was covered under the original grant of environmental clearance.

Ramesh Agrawal from Jan Chetana questions this stance. "There are major changes in the project sites and other vital facts mentioned in the EIA submitted for the public hearing of the 2400 MW expansion. There are no details available on the location for and whether the land for ash pond, water reservoir and colony. According to the information provided, the coal handling plant and fabrication plant will be at another site about 50 kilometers from the proposed site. Should all these changes amounting to changed project parameters (explained after the public hearing) not be subject to a fresh EIA and public consultation process?"

The EAC, which met again in late September to seek more clarifications from the company, also accepted JPL's claim that "the cumulative risk due to 1000 MW and 2400 MW would restricted within the plant boundary." Agrawal questions this too, noting that the intensity of land use is an important factor in determining how the plant will affect the region around it. Even common sense would conclude that the risks and impacts of any expansion, even if the expansion itself was carried out within the boundary of the original project, would be felt outside of the plant premises.

By November, 2010, the EAC seemed to have got all the explanations it had sought, and the violation of the environmental clearance process in the first place did not seem to matter. The committee recommended that the company should be granted environmental clearance to continue with the expansion of its project, and no penal or regulatory action for the violation was taken by MoEF on the construction activity that had been initiated.

All that's left now is for MoEF to rubber stamp this recommendation.