Jindal Steel and Power Ltd. is seeking environmental clearance for a proposed Rs 2000 crore expansion project in Chhatisgarh. A public hearing this January witnessed plenty of local opposition. The 17 July visit of a Ministry of Environment expert committee has not inspired faith in due process, writes Kanchi Kohli.
03 August 2005 -

JSPL had applied to the Central Government requesting environmental clearance for a proposed Rs 2000 crore expansion project. An environmental 'public hearing' took place in Raigarh in January 2005 and witnessed plenty of local opposition to the project. Villagers and civil society groups have protested over the promoter's assessment of the project's environmental impacts. The approach of the Ministry of Environment's expert committee which visited the region on 17 July has also not inspired the villagers.

On 3 August 2004, JSPL received clearance from the Ministry of Environment and Forests for expansion and increasing the capacity of its steel plant, captive power plant, steel melting shop and other operations. The land area for this expansion was 41 hectares claimed to be within the existing plant premises and relevant clearances were obtained from the state departments. This outlay was put at Rs 600 crores.

On 18 August 2004, 15 days after the above clearance was granted, JSPL applied for yet another clearance. This time, a Rs 2000 crores expansion project spreading over three villages surrounding Patrapali -- Saraipali, Gorkha & Kalami -- was put on the table. The villages are on the outskirts of mixed deciduous and sal, bamboo and teak forests. Agriculture is a major occupation here. Some villagers are also engaged in tendu patta (minor forest produce, Tendu leaves) collection. Government records show the population of the villages to be close to 3000, excluding Patrapali village itself. (1 crore = 10 million) 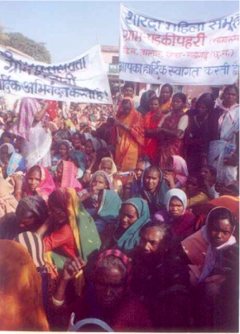 A public hearing for the Jindal expansion project was to be conducted in Raigarh on 4 January 2005. Lok Shakti, a civil society group in Raigarh had chanced upon a notice announcing the hearing. Environmental public hearings are a requirement under the law, the Environment Impact Assessment (EIA) Notification, 1994. The District Collector organises the environmental public hearing and is a member of the hearing panel. The meeting is supposed to hear concerns, opposition and clarifications on the project and its impact on the local environment and the people.

But the hearing could not proceed. JPSL brought a large number of its supporters and the proceedings were disrupted. Infact, the District Collector R S Vishwakarma had to employ the police force. Vishwakarma rescheduled the hearing for 18 January 2005. However, this would have clashed with the local panchayat election, which was pointed out by the representatives of Lok Shakti, a local citizens' organisation. After much persuasion, the public hearing was shifted for 29 January 2005.

Before the 29 January hearing, a group of Chhatigarh based civil society organisations banded together informally as the Raigarh Jila Bachao Sangharsh Morcha (RJBSM). The network included Lok Shakti, Chhatisgarh Mukti Morcha and Ekta Parishad to name a few, along with several independent individual supporters.

The process followed for organizing the public hearing was in clear violation of what is stipulated by law. Both the postponements (18th and 29th) were without the required 30 day notice period. The English version of the EIA report was made available only at 3 of the 5 places mandated as per law. The Hindi version of the report and its executive summary were not made available and this affected the effective participation of the local people at the public hearing.

Present on the 29 Jan. hearing

On 29 January, there were several problems with the way the hearing proceeded. One, no actual public hearing was conducted. People were asked to queue up to give in their complaints in a manner similar to a voting process. There was no interaction with the hearing panel. Two, the constitution of the hearing panel itself raised serious questions. (See sidebar).

The hearing was attended by more than 10,000 people. Local groups had brought villagers from outside the affected area as well, in a sign of solidarity. Expressions of opposition were both written and verbal. The message was loud and clear, but the District Collector only allowed for queuing up and registering of complaints! What could have been an opportunity for the gathering to become a forum for discussion and debate was completely undermined by bureaucratic disregard. The violations of the public hearing process were immediately registered in the form of a letter by the RJBSM to the Collector.

Apart from legal and procedural issues, there are serious implications of this expansion that warrant scrutiny. The EIA Report was prepared by EMRTC Consultants Pvt. Ltd., Delhi, and does not address many of them.

Even for the current and approved expansions of JSPL's operations, a comprehensive analysis of environmental impacts is not available. Any large industrial operation with heavy extraction of water, dumping of hazardous waste and moreover expanding land requirements would have its social and ecological implications. Still, JSPL is certified with Environment Management System, ISO 14001, which is mark of excellence in environmental performance. They claim to comply with all requirements of law. The realities seem to tell a different story.

Sanjeev Ghotge, a development analyst and an IIT alumnus, reviewed the EIA report and drew several conclusions. One is that "several hundred million tonnes per annum of solid wastes and fly ash are being indiscriminately dumped on land. These contain heavy metal constituents that will eventually leach into both surface and ground water regimes over the years, making the water unfit for human and animal consumption as well as damaging to all other forms of life. Health consequences will inevitably follow...". Ghotge is the author of a recent paper on the Chhattisgarh Industrial Policy 2004-09, published by the National Centre for Advocacy Studies, Pune. He explores possible alternative modes of development for a new state like Chhattisgarh in the paper. (See www.ncasindia.org)

The RJBSM also submitted its own critique of the EIA report to the public hearing panel. One of their points was this: 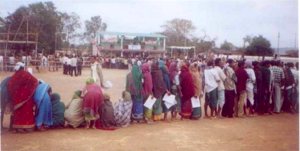 People lining up to register their voices at the 29 January 'hearing'. Pic: Lok Shakti.

"Chapter 5 discusses in detail about the forest ecosystem in Raigarh and around the proposed area. The forest types mentioned here include mixed deciduous and sal, bamboo and teak forestshowever, there is no discussion about the impact, in terms of pollution or tree felling, of the proposed plant on the vegetation or natural regeneration."

As of today, JSPL's application for environmental clearance is pending with Ministry of Environment and Forests expert committee on Industrial Projects. It is upto the committee to understand the socio-ecological impacts of JSPL's expansion proposal and the procedural lapses before it takes a decision on whether the expansion should be granted a clean green chit. But the committee's approach has not left the local groups feeling very hopeful.

Prior to its scheduled meeting on 29-30 June 2005, the committee's Chairman and Member Secretary G V Subrahmaniam received a comprehensive submission from RJBSM. This prompted the committee to defer its decision on the project and undertake a site visit. In addition to the Chairman, B Sengupta, R K Garg, and Ahuja Rai were the other members who visited. The visit itself was somewhat secretive. It was only through rumours that the local groups had even gotten an inkling of the visiting officials. Still, there was hope, and a spark of positive energy that expert committees do listen to appeals from local groups.

However, what transpired seemed to be mere eyewash. The expert committee members visited the area only for one day on the 17 July 2005, and chose to completely ignore RJBSM, the group that made the comprehensive submission. RJBSM had regularly attempted to highlight the problems arising out of the project. This has thrown up myriad questions, the answers to which can only be mere speculation. Why did the expert committee choose only to interact with JSPL? Was a one day visit enough to understand the concerns and implications that have been pointed out repeatedly? What were the intentions of the expert committee? (The Ministry of Environment's website declared only on 20 July that a site visit was conducted on 17 July, with no other details).

Local citizens groups in Raigarh now fear that the project will likely be cleared. But they do not appear to be giving up.

Kanchi Kohli is based in New Delhi and a member of the Kalpavriksh Environmental Action Group. She undertook a critique of the JSPL project's EIA report which was submitted at the 29 January public hearing. She was also involved with assisting the Chhatisgarh NGO Lok Shakti on information and strategy for the public hearings described in this article.