Women in Kashmir do not physically encounter violence as much as men do, but their feelings of helplessness and subsequent guilt resulting from the violence around them is taking a toll. Freny Manecksha reports.
24 May 2011 -

"I see several women every day. Many of them are employed, and earning fairly well. But I have yet to encounter someone who can confidently state 'Yes, I am happy, I am content.' The peace has gone from our hearts," says Dr Zahida Shah, director of a health care and fitness centre for women in Srinagar.

Sociologists like Dr Bashir A Dabla have pointed out how militarisation and prolonged conflict in the Kashmir Valley has had an effect on every aspect of life in this region - social, cultural, psychological, economic and educational. Women have been particularly vulnerable to these effects, and this has impacted on their health and well being in many direct and indirect ways.

Deaths and enforced disappearances of male members from the 1990s, either because of the militancy or operations by security forces, have left many women heading and providing for families single-handedly. The precarious position of "half widows" or women, unsure of the fate of their husbands, is particularly poignant. They cannot inherit property or claim widow benefits, and according to Islamic law must wait for at least seven years before they can marry again. The majority of them have chosen not to remarry. Apart from issues of livelihood they must live with the haunting trauma of wondering what happened to their loved ones.

Parveena Ahangar, who heads the Association of Parents of Disappeared Persons, and whose 16-year-old son disappeared after he was rounded up by security forces, recounts the aching loneliness of Magli, a woman who was divorced and whose son was forcibly disappeared. "In the last few years before her death Magli was reduced to talking to her hookah as she grappled with painful memories," says Ahangar.

Undoubtedly the most distressing repercussions of the conflict and high levels of exposure to violence for women are with regard to mental health. The international medical aid group Medicins Sans Frontiers (Doctors Without Borders) published a report, titled Conflict and Health, based on a study in villages of Kupwara and Budgam districts in 2005 to assess confrontation with violence and its consequences on mental health and socio-economic functioning. Over one-third of the respondents in this study were found to have symptoms of psychological distress expressed through symptoms like nervousness, tiredness, being easily frightened and complaints of headaches. Women scored significantly higher. 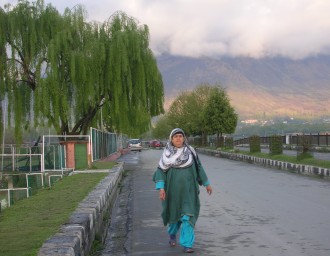 During periods of turmoil and curfews women were unable to step out of the home and enjoy simple pleasures like a walk.

•  Memories of protest
•  Haunted by the riots

There was also a high prevalence of suicidal ideation with one third of respondents saying they had contemplated ending their lives. (The rate of suicide, according to MSF for both males and females is twice the rest of India's average).

The study also says that for women most of the psychological distress was associated with feelings of powerlessness, dependency on others for daily living and witnessing killing and torture. Women had lower confrontation with violence being confined to the homes but, the study notes, feelings of helplessness and guilt caused by witnessing violence was often more traumatic than experiencing it.

Last summer's uprising, in which thousands took to the streets in angry protests and operations by security forces left 123 dead and thousands injured saw a resurgence of psychological distress. Dr Muzaffar Khan, a clinical psychiatrist in Srinagar, explains how Post Traumatic Stress Disorder (PTSD), formally recognised as a psychiatric disease in the 1980s, has manifested among his patients especially among the youth in feelings of depression, fears of the unknown and palpitations. He says he has seen young women from villages exhibiting PTSD symptoms of panic attacks and reporting feelings of impending doom and shivering fits.

Dr Khan, who also runs the de-addiction clinic under the state's police at the control room in Srinagar, says there is a definite link between prescription drug misuse and PTSD. Drugs that are misused include painkillers like Spasmoproxyvon, codeines, sedatives and other painkillers.

Although women have not attended the de-addiction centres because of fears of being stigmatised, there is evidence to show that the problem is not restricted to men. After an education programme on drug addiction in Pattan there were inquiries by girl students who asked if they could visit in a group. However there are no facilities as yet to treat women in addiction.

Besides these obvious psychological disorders women's health has been affected by the lifestyle changes necessitated by the conflict situation. Dr Zahida Shah points out how prolonged low activity because of inability to freely move about and lack of recreational facilities has led to obesity and its attendant ailments of diabetes, hypertension and arthritis.

"During curfews or periods of unrest even taking a walk was not possible. Typical social activities like picnics or going to the parks or gardens were curtailed. One rushed to be back home by 5 PM.

This shift in lifestyle was accompanied by a change in eating habits with an increased uptake of fast foods. All this coupled with baseline stress because of the curfews, protests and disruption of normal life has resulted in the region's women suffering from high cholesterol levels, angina and even myocardial infarction at a much earlier age than before."

Women's reproductive health has also been affected. Dr Bilquees, a gynaecologist, says that stress along with factors like being overweight, has seen a significant increase in polycystic ovarian disease among young Kashmiri women. PCOD has symptoms like irregular menstrual cycles, central obesity and glucose intolerance. It can consequently lead to infertility, obesity, diabetes during pregnancy, early menopause and early aging. Stress, she says, has also contributed to menstrual irregularities and certain menstrual abnormalities. She has observed an increasing trend towards early onset of menstruation.

The breakdown of social infrastructure and lack of medical facilities has also contributed to pregnancy mishaps. She narrated instances of how the lack of transportation - especially during shutdowns and curfews - has led to women with foetal distress reaching the hospital too late, and newborns dying before they got necessary attention as a result.