Incredible Medepally: so clean and green

No other village is more eco-friendly than this one in Andhra Pradesh. From 100-per cent toilet coverage to rain water harvesting; from soak pits in every house to clean streets. Usha Turaga-Revelli reports.
25 December 2008 -

Khammam (Women's Feature Service) - It takes less than 30 minutes to clean this village - the entire village. And it is no hamlet. With a population of about 3,000, Medepally, in the Mudigonda administrative mandal of Andhra Pradesh's Khammam district, is a village that is spread over a two-kilometre radius.

More than 500 women - all members of various self-help groups (SHGs) in the village - assigned themselves a stretch of each street that they clean twice a week. "I don't live in the village anymore. But, on Mondays and Thursdays, I commute to the village first thing in the morning to finish my part of the job," says Sudha Rani, who now lives in Kusumanchi, about 10 kilometres away. Sudha can be often seen zipping around the village in her two-wheeler, with a broom hanging onto the carriage. 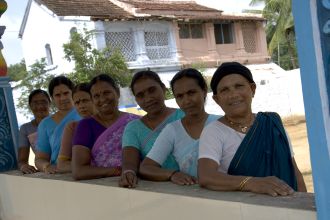 But the 525 members of the 48 SHGs in Medepally haven't limited their good work to maintaining sanitation in the village. They have also got together to provide clean drinking water and ensure maintenance of the ground water, the chief source of drinking water here.

"It was more than a year ago that we noticed most of us were suffering from joint pains, hives and skin discolouration. But, it took us some time to link it with the water we drank and used," says Nagalakshmi Kothapalli, leader of a women's group and president of the Mandal Praja Parishad, a local body.

Although the neighbouring district of Nalgonda had hazardous levels of fluoride in its ground water, which had caused health problems and had led to mass migration, it was only recently that Khammam began to feel the impact of fluoride. In fact, the state government has identified the Palair region of the district, where a reservoir from the tail end of the Nagarjuna Sagar left bank canal was recently built, as a fluoride-affected region. Fluoride is essential, within permissible limits, for dental and skeletal strength. World Health Organisation (WHO) states the limit to be one ppm (parts per million). However, Nalgonda has reported 10 ppm in certain places and Mudigonda in Khammam has levels exceeding 2.5 ppm.

The women say that the happiest moment for them was when they could actually have a Rangoli (intricate floor patterns filled in with coloured powder) contest on their clean streets to celebrate the harvest festival of Sankranthi.

Recognising this as a hazard, the administration recently announced time-bound plans to pump in over Rs.1 billion (Rs.100 crores) for the provision of clean drinking water as the region is primarily dependent on ground water for all its water needs.

However, long before the authorities took any action, the women of Medepally decided to nip the problem in the bud. Acknowledging that ground water was their only source of water they consulted the sarpanch (village council head) and decided to build a water purification plant. Many meetings and plans later, the village launched a mineral water plant with an investment of about Rs.200,000.

The plant has been set up by the village-level federation of all SHGs, Snehita Mahila Grama Sangham. With the help of the sarpanch, some women leaders went to the district headquarters, Khammam, and collected the necessary information to build a water purification plant. They then sought a commercial estimate from a company, who came and set up the plant for them. The women contributed Rs.75,000 and collected the rest from the villagers. Money was also pooled in for the construction of the room that has the reverse osmosis machines and storage tanks. 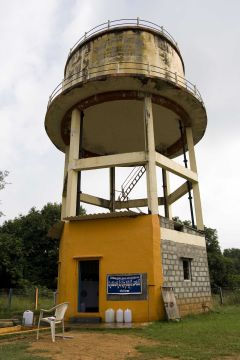 The work began in January this year and was completed within a couple of weeks. The plant itself has been set up under the village water storage tank, which is attached to the main water source, the ground water well. The filtered water is filled into a fibre tank, from which it is filled into cans through a tap. Since, the water is not stored for more than an hour at any given point of time there is no problem of moss or contamination and all the containers are periodically cleaned.

The women worked out cost of the purified water and also chalked out a timeframe in which to recover the money spent on the project. Today, a 20-litre can of purified water is sold at a mere one rupee. Similar sized cans bought from nearby towns come at the commercial price of Rs.40. A minimum of 300 cans are supplied to the village households in a day. This results in a monthly income of not less that Rs.10,000 to the woman's self help group.

Part of the money they earn goes to employ two workers of the panchayat towards returns for the money contributed by the villagers. "We did such pioneering work that three plants were set up in quick succession in the near-by villages. Even a popular hotel on the national highway followed in our footsteps. Now, we have leaders of SHGs visiting us from as far as Anantapur district (a severely drought-hit district about 400 kilometres away)," says a proud Drakshavathi Mikkilineni, president of the Snehita Mahila Grama Sangham.

A winner of both the Nirmal Gram Puraskar and State-level Shubhram Award, Medepally is a village that has achieved total sanitation. "Initially, when we got down to cleaning the streets, we were shocked at how much trash there was. Cow dung, weeds, garbage and open drains that buzzed with mosquitoes. It hit us hard, the combined fact that we were neither clean nor did we have proper drinking water," recalls Ram Tulasi Akkineni, Treasurer, Swayamkrushi group. Now, the SHGs have also employed two workers - with earnings from the water plant - to clean up the dung on the roads every day.

With a turnover of about Rs.12 million, the SHG has 856 life insurance policies among the members and does a whole range of activities from distributing calcium tablets to children to post office savings every month. They even managed to prevent liquor from being sold in their village, using a variety of techniques from cajoling their men to breaking arrack pots.

No other village is more eco-friendly than this one. From 100-per cent toilet coverage to rain water harvesting; from soak pits in every house to clean streets; Medepally has done it all. "The kids who study in our high school have a small session every morning to talk about sanitation and safe drinking water," says Savitramma Perumalla.

Under the Total Sanitation Programme, each household is given Rs.2,750 to build a toilet to which the owner adds another Rs.1,500, but in Medepally the target was achieved long before the government launched the scheme. "Now, we are so used to clean toilets that when we go visiting some other village, we just can't stand the muck," says Nagamani Samineni. "Even the kids in our village are so clued in, they mockingly threaten visitors against defecating in the public. They say 'you will be fined Rs 500 by our sarpanch'," laughs Hari Prasad Samineni, sarpanch. "And happily, we have not found a single offender until now," Savitramma adds.

Medepally, in the not-too-distant past, was the arena of a bloody feud between political leaders and their families, with rivals even having been hacked to death on its roads. The unity and the sheer pragmatism that the women of this village displayed stands as a great contrast to the violence and fear that had marked mainstream politics in the region. The women say that the happiest moment for them was when they could actually have a Rangoli (intricate floor patterns filled in with coloured powder) contest on their clean streets to celebrate the harvest festival of Sankranthi. (Women's Feature Service)

Usha Turaga-Revelli is a senior journalist based in Hyderabad.