Servicing the market borrowings of the Sardar Sarovar Nigam Ltd is a deadly game where the social sector expenditure of the state is held hostage. Himanshu Upadhyaya digs deeper.
01 November 2003 -

On May 23rd this year, the Sardar Sarovar Construction Advisory Committee (SSCAC) made an unpublicized presentation on the Costs and Benefits of Sardar Sarovar project to Maharashtra before the government of that state. The committee estimated the power component costs at Rs 6053.86 crores (at 2000-01 price levels), of which the expenditure already incurred was Rs 2971.30 crores (as of March 2003). A further the Rs 3082.56 crores would be needed for completion, the committee reported. This figure was Rs.200 crores less than the estimate provided in March in response to a question in the Lok Sabha (cf. question no 233, dated March 06, 2003), but in the intervening period the Central Electricity Authority weighed in with its estimate of Rs 4526.15 crores needed for completion.

Even for this enormous project, with its already huge overruns of initial estimates, this is a lot of variability in a span of only two months. Which is the real figure, and why are the numbers so varied? 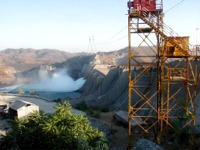 The public may never know the answer. Also on May 23, Suhas Paranjpe and Girish Sant walked out of the Maharashtra state govt.-appointed SSP study group, following the state government's go-ahead for a further increase in the height of the dam without ensuring proper rehabilitation of displaced persons. Paranjpe and Sant said it was impossible to come to any realistic evaluation of the project, because updated cost estimates for the project were not made available to them despite repeated requests. "Even after two years from its constitution the study group has not been able to progress beyond the initial stage of trying to collect the essential data because of reluctance on the part of project authorities and Maharashtra govt", Paranjape said.

Prayas, their energy NGO, informed the Maharashtra government that it would do well to exit from the Sardar Sarovar Project (SSP) and cut its losses instead of squandering billions of rupees on it. Both the experts urged that Maharashtra should consider writing off the potential power benefit, and instead seek the recovery of its money already invested in the project. Clearly, the experts believe Maharashtra's gains would be vastly surpassed by the costs the state would have to bear.

The purpose of a cost estimate would be lost if the money needed would have to be borrowed and the interest costs of such borrowing were not included in the estimate.

Some signs of the impending financial disaster are already plain. The project authorities as well as the Narmada Control Authority maintain that Maharashtra owed the project Rs 241.79 crores as on September 30, 2001, which they consider "outstanding dues, disputed". Some of this is expenditure incurred on Resettlement and Rehabilitation, as well as on construction of rock-filled dykes and link channels, which is as yet unresolved. But of this outstanding "disputed" dues yet to be paid, as much as Rs 149.37 crores were due to the interest charges Sardar Sarovar Narmada Nigam Ltd (SSNNL) had paid on its market borrowings. There is only one word to describe SSNNL's behaviour in racking up these costs - indiscriminate. No less than the Comptroller and Auditors General of India said so.

In its report on Gujarat (Commercial), for the year ended 31st March 2001, the CAG has indicted the SSNNL for raising finance through reckless market borrowings and spending a whopping Rs 2413.98 crores - i.e. 22% of the "total" expenditure incurred on the project as on March 31, 2001 - towards interest payment and servicing debt liabilities. The CAG reached the conclusion that "SSNNL without any systematic plan for redemption of debts went on borrowing for redemption of earlier debts, which resulted in abnormal increase in the expenditure on servicing the debt". Moreover, there is a rider. Even in this "total" expenditure, the expenditure incurred on Sardar Sarovar based pipeline project is not included. While the drinking water benefits are claimed to be emanating from SSP, the costs towards it have never been realistically assessed and reflected in Cost estimates, even in the revised ones.

SSNNL replied that the expenditure on account of interest pertained to "Interest During Construction (IDC)" which is taken as part of the project cost. This is simply impossible. The very purpose of a cost estimate would be lost if the money needed would have to be borrowed and the interest costs of such borrowing were not included in the estimate! The CAG rightly pointed out that the original estimates had not identified borrowings as a source of funding, and that interest of these could not be treated as part of the project costs.

No doubt a substantial portion of this will be imposed on participant states as "outstanding dues disputed"! The SSCAC's financial sleight of hand in classifying the escalating interest payments along with the disputed costs of rehabilitation is simply a short-term ruse; by referring to some figures as 'disputed' the obligation to include them in tallying the true costs has been sidestepped. This may temporarily veil the financial disaster confronting Maharashtra, but the costs are real enough - this is one dispute the state cannot afford to see settled.

Which brings us to the question that should puzzle any observer: why does Maharashtra wish to continue participating in financing the imprudent market borrowings of Sardar Sarovar Narmada Nigam Ltd, not a single paise of which will go into generating even a single unit of power for the state, or rehabilitating a single family displaced? Indeed, recently SSNNL asked Maharashtra to pay up Rs 159.40 crores as the expenditure on Resettlement and Rehabilitation, although the NWDT clearly stresses that Gujarat has to bear the total cost of this responsibility. Really, why is Maharashtra letting itself be financially flogged?

The most evident answer is that bondholders who financed the enormous costs of the project expect to be repaid, and regardless of the recklessness with which the borrowing continues, there is sufficient pressure on all state governments - whether benefiting or not - to continue to provide money for repayment. Indeed, politicians supportive the construction of the dam have in the past relied on the financiers to fund rallies by 'supporters'. Given this close connection, bondholders face little risk of default by SSNNL, despite the project's obviously wasteful expenditure; their money is secured by their ability to steer public funds to SSNNL to pay for its profligacy.

The inability to gain the lending community's trust is thus overcome by redirecting funds meant to compensate riot victims, adding cruelly to the suffering they have already endured.  •  Narmada: complete coverage

There is, additionally, a cruel element to the financing of the project. At times when the bonds appeared to be in danger of being undersubscribed, or when repayment obligations have to be met, the burden has conveniently been turned upon riot victims, of all people! Families of post-Babri riots in Surat were provided compensation in the form of Narmada bonds. The same murky tale repeated it self in 2003; with the SSNNL facing possible default on repayment obligations, victims of ethnic cleansing were forced to finance the project, as the state turned their compensation into bonds. The inability to gain the lending community's trust is thus overcome by redirecting funds meant to compensate riot victims, adding cruelly to the suffering they have already endured.

This is a deadly game, where the social sector expenditure of the state is continuously raided to keep the project funded. In the process, every legitimate need of the people is now hostage to the financiers' interest.