Adding millets to the basket

Recently, IIT-Delhi and the University of Allahabad carried out a survey of the Public Distribution System (PDS) across nine states in India. More than 1200 people living in small villages across the country were interviewed. A number of findings from this survey are noteworthy, in light of recent demands to 'reform' the food security system in the country.

The survey found that the PDS is functioning remarkably well even in states where it was dismal in the recent past. Most people were getting nearly all their quota of grain and were satisfied with the functioning of their ration shops. Most of them preferred to get their entitlements from the ration shop rather than receive cash - as has been proposed in the recent draft of the Food Security Bill.

One of the questions in the survey was whether the respondent would be willing to buy grains like Finger Millet (ragi), Pearl Millet (bajra), Sorghum (jowar) or Corn (makka) if these were made available in the ration shops. An overwhelming 79 per cent of the respondents said 'yes' in reply to this question (see Table for state-wise data).

People are very aware of the benefits of these nutritious grains, and feel that eating these grains will enable them to work well and be healthy. Millets have been eaten for a very long time and were probably the first cultivated foods. A recent archaeological excavation in China found 4000 year old noodles made of foxtail millet. In India too, people used to eat these grains in the past, but with the shift in agricultural practices and government support to rice and wheat, their eating patterns also shifted. But if these grains were to be made available in the ration shops, they would gladly consume them again.

Millets were referred to as coarse cereals but considering their nutritional values, they are now more aptly called nutritious cereals. In spite of the steady economic growth over the last 20 years, India has not been able to tackle the nutritional crisis faced by a large part of the population. The third National Family Health Survey revealed that in 2005-6 more than 40 per cent of children in the age group 0-3 were underweight. More than 70 per cent of children in 6-35 month age group were found to be anemic. More than one-third of adult women were underweight and more than half of them were anemic. 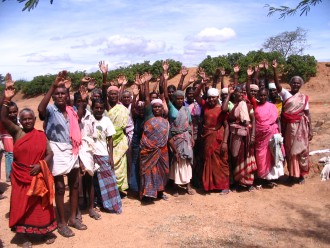 Millets have been eaten for a very long time and were probably the first cultivated foods. (Photo: NREGA workers in Kulathupatty panchayat, Dindigul district in Tamilnadu say 'yes' to millets in ration shops.)

•  The way we used to eat
•  Cash trasfers and food security

While the reasons for this dismal state of nutrition are many, including poverty and great inequality, the consumption of a more diverse diet rather than just white rice (polished rice) and wheat could help alleviate this.

Food inflation in India is very high (around 9 per cent currently) and it disproportionately affects the poor who spend hearly half their income on food. One way to bring this down would be to increase cereal cultivation in fallow lands. Millets are the best cereals to be grown, as they are hardy crops requiring very little water and can grow even in relatively poor soils.

Rice and wheat growers receive much help including subsidies for irrigation (building of dams, canals, electricity for pumping underground water) and fertilizers, government procurement of produce, and extension services. On the other hand, dry land millet farmers are mostly left to fend for themselves. Because millet farmers work in difficult lands, their yields and incomes tends to be lower, and many of them choose to leave their lands fallow. In the long run, this will lead to soil erosion and desertification. Hence the case for subsidising millet growers is strong - to improve food security, and to maintain the fertility of lands. Procuring millets for distribution in the PDS will be a big first step to support millet growers.

Distributing millets in the PDS would also help strengthen the PDS system itself. Local procurement and distribution of millets, as opposed to the current practice of centralised procurement of rice and wheat, and then transporting these to far-off places, would help reduce transportation and storage costs. The procurement price of millets is substantially lower than that of rice or wheat (though one could argue that it should be higher) thereby reducing the subsidy provided to consumers. One argument that is put forward against universalization of the PDS is that there is not enough grain for procurement by the government - adding millets to the procurement basket would help address this.

People want the PDS to be strengthened, and millets to be made available in their ration shops - of this there is no doubt. Promoting millet cultivation and making them available in ration shops, mid-day meals and child-care centers will address our nutritional crisis, strengthen rural livelihoods, and reduce price inflation of cereals. Will the government listen?

Karuna M is an independent researcher based in Dindigul. In the PDS Survey 2011, he was the team co-ordinator.